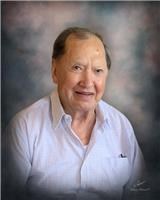 BORN
1928
DIED
2020
A memorial service for Lloyd J. Langlois Jr. (L.J.), 92, of Leesville, LA will be held on Sunday, December 6, 2020 at 2:00 p.m. at St. Michael the Archangel Catholic Church of Leesville. Visitation will be held from 12:30 to 2:00 p.m. before the Mass. Father Kenneth Michiels will be officiating.
L.J. was born February 12, 1928, in New Roads, LA to Lloyd Joseph Langlois Sr. and Naomi David Langlois. He passed away November 28, 2020 in Alexandria, LA.
His family moved to Baton Rouge when he was in high school and L.J. spent two years in college there. On a blind date, he met and married the love of his life, Norma, in 1949. They lived in Baton Rouge where he was employed at the Standard Oil plant. In his early 20's, during a layoff at the plant, they made the decision that he should go out on his own and be a masonry contractor. They would build complexes in Huntsville, Scotsborough, and Decatur before moving to Springfield, IL to build a large complex. He hated the winters in the north, so in 1974 on a family vacation, they noticed they had driven a long distance without seeing a McDonald's and that started a 30-year career as a McDonald's owner/operator and brought them back to Louisiana.
Over the years, he was a member of the Lion's Club, and The Rotary Club, but his great love was St. Michael's Church. He was instrumental in the fund raising and the construction of the new church and never failed to smile when he walked through the doors and looked around.
He was born during the depression. His father worked on the WPA. He vowed at an early age that he would work as hard as he had to, to assure that his family would never be poor. He was an incredibly hard-working man, not always an easy person to deal with, but always willing to do whatever it took to get the job done. He never forgot where he came from and more often than not looked like the janitor instead of the owner.
He and Norma were avid travelers. They took many trips all over the world often bringing all their siblings and their spouses along with them. He loved to tell stories about their excursions.
He is preceded in death by his parents and his sister, Sadie Cutchins.
Left to miss him and cherish his memory are his wife of 71 years, Norma; daughter, Sandra Craft (Rick); son, David; four grandchildren, Lauren Craft Johnson (David); Jordan Craft, Timothy Langlois, and James Langlois (Ashley); three great grandchildren, Blakely Johnson, Reid Johnson, and Violette Mae Langlois; two sisters, Joy Mayers and Jane Lavigne; a special former daughter-in-law, Terri Singleton; and many nieces, nephews, and friends.
L.J. was generous to his community and his church and will be greatly missed by his family and friends.
Published by Leesville Daily Leader from Dec. 3 to Dec. 10, 2020.
To plant trees in memory, please visit the Sympathy Store.
MEMORIAL EVENTS
Dec
6
Visitation
12:30p.m. - 2:00p.m.
St. Michael the Archangel Catholic Church
Leesville, LA
Dec
6
Memorial service
2:00p.m.
St. Michael the Archangel Catholic Church
Leesville, LA
MAKE A DONATION
MEMORIES & CONDOLENCES
1 Entry
He was always a down to earth man & treated you like a friend. We will miss his generousity & love for his family & church, but know he is with Our LORD. Our prayers are with your family.