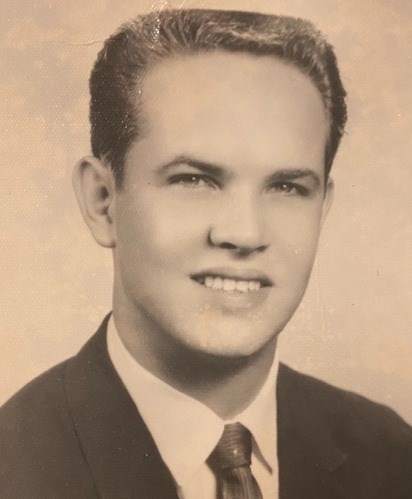 *Michael Drue McVey, affectionately known as Poppi and Dada, passed peacefully, with his family by his side, the evening of November 15, 2021 in Victoria, Texas. Michael Drue born November 3, 1944, had two great loves. One of those was his love of the Lord. Raised a Christian in the Lawndale Church of Christ by his mother and father, Michael carried his faith steadfastly throughout his life. Mike believed the Word of God to be the Living Word and worshiped at Midtown Church of Christ in Victoria, Texas until the end of his life. Mike loved the Lord and the Lord's bride, the Church. Speaking of brides, boy, did Mike have a couple of great ones. Michael had two marriages, to Cheryl LaCoste McVey and to Lisa Olivares McVey. These marriages would bear the fruit that created his second greatest love, his children, grandchildren and great grandchild.
Michael Drue McVey is survived by his children. Micha Leach, his eldest daughter, and her husband Geoff Leach of Spicewood, Texas. Benjamin McVey, his only son and middle child, and Marcella Zuniga of San Antonio, Texas. And his youngest daughter, Kaitlin McVey, and her husband Jared Paterson of Inez, Texas. Mike was a doting Poppi to Michaela, Laine, Lily, Lena, Lucy and Luka Leach, Mateo and Tomas McVey and Harper Paterson. In his final year of life Poppi experienced the joys of being a Great-Grand Poppi to Mikkel Bridges.Michael Drue was preceded in death by his parents TW and Gladys McVey of Houston, Texas. Mike was the quintessential middle child. He would be preceded in death, just months ago, by his eldest brother James "Buddy" McVey of Sugarland, Texas and survived by his loving baby brother ClyTee McVey of Houston, Texas.
Mike lived a blessed and beautiful life full of many seasons. In the 1980's, Michael was a stone mason in Houston, Texas. Mike was involved in the construction of many of the buildings that grace the iconic Houston skyline today. Later in life Mike became a rancher raising Brahmas in Luling, Texas. This ranch would be the setting of many of his extended family's fondest memories with him. Mike had an expansive and adoring extended family. His nieces and nephews Lisa Karen, Joe Brad, Patti, Matt, Josh and Ashley. As well as a Great Uncle and Great-Great Uncle to countless others. Mike would spend his final years as a resident of Victoria Texas and a member of Midtown Church of Christ. Mike enjoyed fishing with his family in Port O'Connor, Texas where he built a small cabin. He would regularly visit, fishing tirelessly for the elusive Texas Slam. During this season of his life he purchased a 1937 Chevrolet Special Deluxe which he went on to restore. He traveled to car shows throughout the state and won many awards for the beautiful restoration. In Mike's last great adventure, he purchased a travel trailer and traveled across the country, solo, to see and visit all of the places he had always dreamed of visiting.
A celebration to honor the life of Michael Drue McVey will be held at Midtown Church of Christ, 5901 N Main Street, in Victoria, Texas, Saturday, November 20th at noon. In lieu of flowers, the family requests that donations be made, in his honor, to the Team Gleason Foundation. The Team Gleason Foundation works tirelessly to improve the lives of people who are living with ALS, the disease that ravaged his earthly body in his final year of life, but never stole his fiery spirit or love he had for his family and the Lord. The family invites friends and those who loved Mike to attend a luncheon at Midtown Church of Christ immediately following the memorial service. Neither a wake, nor viewing, will be held due to Mike's noble, final wish to donate his body to the University of Texas. *
Published by Legacy Remembers on Nov. 16, 2021.
To plant trees in memory, please visit the Sympathy Store.
MEMORIAL EVENTS
Nov
20
Celebration of Life
12:00p.m.
Midtown Church of Christ
5901 N Main Street, Victoria
MEMORIES & CONDOLENCES
2 Entries
Sending Mike's entire family strength and condolences at this trying time. Rest in peace Mike.
Kathleen Watson
Friend
November 16, 2021
Our heartfelt condolences to the entire family.
Fred and Kay Knight
November 16, 2021
Showing 1 - 2 of 2 results