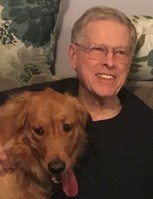 FUNERAL HOME
Wagley Funeral Home
1501 W. Maumee St
Adrian, MI
John Anderson Magill
Manitou Beach - John Anderson Magill, age 83, of Manitou Beach, transferred to heaven on Wednesday, July 21, 2021, at Henry Ford Allegiance Hospital in Jackson, Michigan with his family by his side.
Born on August 20, 1937, he was the only son of Emil "Mac" and Sadie (Anderson) Magill of Atlanta, Georgia.
John had a thirst for knowledge, a passion for learning and a love of teaching others that started early in life. He obtained his Bachelor of Science degree in Biology from North Georgia College and, many years later, his Master of Arts degree in Education from Oral Roberts University. He was commissioned out of college as an officer into the United States Army where his eventual focus was in Logistics. He was stationed for a time in South Korea before returning to the U.S. and continuing his service in the Army Reserves. In addition to the military, John worked for many years as an administrator for the Centers for Disease Control in Atlanta, GA. In 1985, John took an early retirement from the C.D.C. to return to active duty service in the Army, where he spent time in Germany and Kuwait. John, along with his first wife Donna and their son Micah also spent a year in China teaching English as a Second Language. His many careers and travels took him all over the U.S. and the world. Having already retired from the Army as a Lieutenant Colonel in 1994, he finally retired as a government civil servant in 1996. John was a member of the Lifehouse Ministries Church in Tipton, MI and a proud follower of Jesus Christ. He was a ferocious reader and loved researching the history and meaning of words. His trusty copy of Strong's Bible Concordance was always close at hand. When called upon, John was also known to have made a mean batch of homemade cheese biscuits.
In March of 1963, John married Donna Lee Fondren and they were blessed with two sons, Matthew and Micah before her passing in 1998. They had many adventures and touched many lives. John was blessed to find love again, and married Karen Schultz on April 18, 2004, bringing her children into the Magill family. Their union was a wonderful gift for all.
In addition to his loving wife, Karen, he is survived by his children, Matthew Magill of Atlanta, GA, Micah Magill of Tulsa, OK, Tonia "Tonnie" (John) Sprague of Cement City, Vicki "Victoria" Schultz of Manitou Beach, Daniel (Linda) Schultz of Brooklyn and Darcie (Scott) Row of Tulsa, OK, Jamie Wooten of Concord, MI and Samantha Tipton of Olathe, KS; many remarkable and well-loved grandchildren and great-grandchildren; his sister, Sara Blanton of Spartanburg, SC; and his four-legged companion, Essie. He was preceded in death by his parents and first wife, Donna.
Memorial services for John will be on Saturday, July 31, 2021, at 2:00 PM at Wagley Funeral Home in Adrian, with Pastors Brian and Denise Grothe, and Daniel Schultz officiating. Visitation will take place from1:00 PM until the time of service. Burial will take place at a later date in South Carolina. Memorial contributions may be made to Lifehouse Ministries Church in Tipton, MI.
A live streaming of the service will be accessible from John's tribute wall on www.WagleyFuneralHomes.com where a link to view the recording will be available for 90 days. Online condolences and memories may be shared at www.WagleyFuneralHomes.com
Published by The Daily Telegram from Jul. 26 to Jul. 27, 2021.
To plant trees in memory, please visit the Sympathy Store.
MEMORIAL EVENTS
Jul
31
Visitation
1:00p.m. - 2:00p.m.
Wagley Funeral Home (Adrian)
1501 W, Adrian, MI
Jul
31
Memorial service
2:00p.m.
Wagley Funeral Home (Adrian)
1501 W, Adrian, MI
Funeral services provided by:
Wagley Funeral Home
MAKE A DONATION
MEMORIES & CONDOLENCES
Sponsored by Wagley Funeral Home.
0 Entries
Be the first to post a memory or condolences.