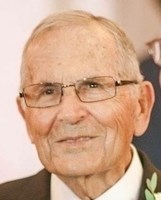 FUNERAL HOME
Brown-Van Hemert Funeral Homes Inc
504 W Main St
Hudson, MI
Merton E. (Gene) Deuel
Onsted - MERTON E. (GENE) DEUEL age 88 passed away December 25, 2020. He was born June 3, 1932 in Petoskey, Michigan to Merton and Nelle (Walkup) Deuel. Gene attended elementary school at Pickford and Sault Ste Marie in the Upper Peninsula and graduated from Hudson High School in 1950. He was married to Janet Lee Ames on August 16, 1958.
Gene graduated from Adrian College in 1954 where he participated in varsity sports and the SAE Fraternity. He served two years in Germany in the 529 Flash Ranging Battalion in the Army of Occupation. He received a master's degree in administration from the University of Michigan in 1959 and an educational specialist degree from Eastern Michigan in 1969. He was a teacher, coach and athletic director in Onsted from 1956-1965 and a teacher and coach in Adrian from 1965–1969. He worked as an intern to the superintendent of Jackson Schools for one year and became the high school principal of Onsted in 1969. From 1970 until retirement in 1995, he served as Onsted's superintendent of schools. After retirement he worked to help develop the Communities in Schools of Lenawee County organization.
Gene was a member and past president of the Onsted Kiwanis Club, a member of the American Legion, the American Association of School Administrators, a charter member of the Lenawee Phi Delta Kappa fraternity, and the Lenawee Superintendents' Association. He served on the Lenawee Economic Development Committee and many other committees.
Gene was preceded in death by his parents, his father and mother-in-law Earl and Olive Ames, and one brother-in-law, Alan Ames. Besides his wife he is survived by two daughters, Terrie (Mark) Mapes of Onsted; and Lynne (William) Dutmers of Muskegon. He is also survived by one son Robert (Pam) Kole of Niles. He is survived by six grandchildren: Amanda (Bryan) Kendrick, Bethany (Andy) Lyons, Brian (Kelcie) Dutmers, Greg Dutmers, Traci (Randy) Akers and Barry (Heather) Kole. He is also survived by one nephew, David Ames and two nieces, Kathy (Robert) DeFranco and Kellie Ames.
A Celebration of Life will be held at 3:00 P.M. Saturday, August 7, 2021, at the Onsted Elementary School Gym. Memorials contributions may be made to the Onsted Kiwanis Foundation Scholarship Fund, Hospice of Lenawee County, or a charity of your choice.
Arrangements have been entrusted to Brown Van Hemert Funeral Home in Hudson. Condolences or words of comfort may be left at www.brownvanhemert.com.
Published by The Daily Telegram from Jul. 30 to Jul. 31, 2021.
To plant trees in memory, please visit the Sympathy Store.
MEMORIAL EVENTS
Aug
7
Service
3:00p.m.
Onsted Middle School
10109 Slee Road, Onsted, MI
Funeral services provided by:
Brown-Van Hemert Funeral Homes Inc
MAKE A DONATION
Please consider a donation as requested by the family.
MEMORIES & CONDOLENCES
Sponsored by Brown-Van Hemert Funeral Homes Inc.
1 Entry
A "class act" if ever there was one. I was glad to know Gene, he influenced me greatly.
Steven C Camron
School
October 2, 2021
Showing 1 - 1 of 1 results