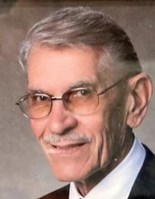 FUNERAL HOME
Tharp Funeral Home
220 Breezewood Drive
Lynchburg, VA
Robert James Graham
3/21/1932 - 7/18/2021
Dr. Robert James Graham, age 89, died on July 18, 2021, in Lynchburg, Virginia at Westminster Canterbury. He died from complications from Alzheimer's disease. He leaves his wife, Phyllis Keip Graham, of 60 years and two children, Lynne Graham Weinmeister (Frank) of Goode, VA and Kenneth Robert Graham (Morgana) of Wayland, Michigan. His grandchildren include Nik Weinmeister (Lauren) of Virginia and Ashleigh and Austin Graham of Michigan, one sister Caroline Hawes of Elyria, Ohio and many nieces and nephews.
Robert was the seventh child of Ernest and Alma Graham of Pontiac, Michigan. When he was one year old, his father Ernest died. Alma raised all her children alone and taught each of them the work ethic, religious values and the importance of learning.
After Robert graduated from Pontiac High School, the Korean War broke out and he enlisted in the United States Air Force. He served in Rapid City, South Dakota and Germany as Head of the Radio Unit. After the service, he enrolled at Central Michigan University where he earned a Bachelor's degree in English. He then began teaching English at Lake Shore Junior High School in St. Clair Shores, Michigan where he met his wife. They were married in 1962.
Robert entered graduate school at the University of Michigan where he earned two Master's degrees and a Doctorate. After his first Master's degree, he was offered a position at U-M' s Bureau of School Services as a School Library Consultant. As a Consultant, he traveled the state of Michigan meeting and advising school librarians.
After six years in Ann Arbor he accepted a position as Associate Professor of Library Science at the State University of New York at Buffalo where he taught and mentored graduate students. Following that he became Media Director at Barrington Public Schools in Barrington, Illinois. His last position was Director of Learning Resources at West Virginia University Medical School, Charleston Division. He served in that position for 18 years supervising the medical library, graphics and television departments. As their children grew Bob volunteered with the Cub Scouts, chaperoned for school activities, and for nine years was treasurer for band boosters for two schools. He also was a lifelong blood donor for the American Red Cross.
After retirement he and Phyllis enjoyed visiting their children and grandchildren, traveling the United States and Europe, and entertaining friends and family. Bob was a devoted family man and an avid learner.
The family would like to extend their heartfelt thanks to the care-givers at Westminster Canterbury, especially to Jessica, Michelle and Mary. Your dedication and thoughtfulness is appreciated in so many ways.
A celebration of Bob's life will be held online on Saturday, July 31, 2021, at 2pm EST officiated by Pastor Peter Thompson of the First Presbyterian Church of Lynchburg. Details of the service can be accessed on the church website at www.fpcly.org/ A private burial service will be held at a later date in Hudson, Michigan.
Donations may be made in Robert's memory to the Alzheimer's Association or the Lynchburg Humane Society.
Tharp Funeral Home & Crematory, Lynchburg, VA is assisting the family. To send condolences, please visit www.tharpfuneralhome.com
Published by The Daily Telegram from Jul. 24 to Jul. 25, 2021.
To plant trees in memory, please visit the Sympathy Store.
MEMORIAL EVENTS
Jul
31
Celebration of Life
2:00p.m.
First Presbyterian Church of Lynchburg
VA
Funeral services provided by:
Tharp Funeral Home
MAKE A DONATION
Please consider a donation as requested by the family.
MEMORIES & CONDOLENCES
Sponsored by Tharp Funeral Home.
0 Entries
Be the first to post a memory or condolences.