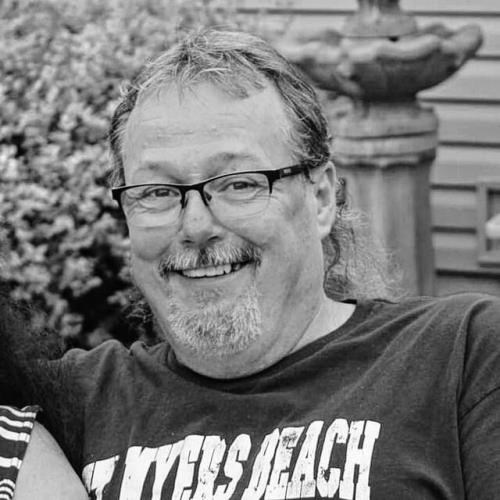 On Nov. 20, 1993, he married the love of his life and his best friend Amanda Grace (Stricker) Chambers who survives. His absolute favorite thing to do was to just spend time with her, no matter what they were doing.

Calvin was a graduate of Wapak High School in 1981. Everyone there knew him as Romie and he cherished the countless fond memories he had while growing up. If you didn't know him by his infectious smile, you definitely did by his 80s style mullet! He attended the Bridge Church usually virtually. He was employed at Honda Manufacturing in Anna. He was previously employed at Coca-Cola and before that Pepsi-Cola. If he had his choice of things to do, being around his kids, family and friends would always be number one. He did love being outdoors or spending some time in his garage working on his cars and motorcycles. He always cheered for the Bucks on Saturdays and his beloved Browns on Sundays. He had the biggest heart and would always try to help out anyone in need.

His funeral service will begin at 1:00 p.m., Monday in the funeral home, with Rev. Randy Davis officiating.

Memorial contributions may be made to Ronald McDonald House or Deb's Dogs.

Condolences may be expressed to the family at www.chiles-lamanfh.com

Published by The Lima News from Oct. 14 to Oct. 15, 2021.
To plant trees in memory, please visit the Sympathy Store.
MEMORIAL EVENTS
Oct
17
Visitation
1:00p.m. - 3:00p.m.
Chiles-Laman Funeral & Cremation Services - Shawnee
1170 Shawnee Rd, Lima, OH
Oct
17
Visitation
5:00p.m. - 7:00p.m.
Chiles-Laman Funeral & Cremation Services - Shawnee
1170 Shawnee Rd, Lima, OH
Funeral services provided by:
Chiles-Laman Funeral & Cremation Services - Shawnee
MAKE A DONATION
MEMORIES & CONDOLENCES
10 Entries
I never knew "Romie" personally, but I knew his Mother Mary Chambers, we attended the same church. Prayers for the family.
Katie Sansone
Other
October 22, 2021
I'm so sorry Mandy & all family of Calvin's family for the loss of this great guy. I always enjoyed being in the company of Calvin & I will that smile he had. God Bless you all with peace & comfort.
Nancy Porter
October 17, 2021
Calvin and the Chambers family have been great neighbors since day one. If my mom ever needed help with something around the yard, he would help. For example, this past summer we would all mow on the same day and he´d mow part of our grass so we´d get done quicker. Helped us when we had truck troubles too. He would come over and talk to my mom and I as well. He genuinely cared about how we were doing. I wish the entire Chambers family well and my mom and I are only a house away if you need anything at all during these times and beyond. RIP to a great guy.
Heaven and Alice W
Other
October 16, 2021
What wonderful memories growing up with Romie and his siblings. You will be missed.
Karen Guess
Family
October 16, 2021
Mandy, my heart literally breaks for you. We all have been friends for so long. I love you both ! You two were Soul Mates ! I remember when you first started at Pepsi in the Dr. Pepper Bldg. Calvin fell hard for you.
Deb Culp
Work
October 15, 2021
Thinking of you Mandy, sending prayers of comfort to you & the family.
Julie Dunn
Friend
October 15, 2021
So sorry to hear this!!! You all are in our thoughts and prayers!!!
Mikesell family
Friend
October 14, 2021
Praying much for our Ohio family now and the days to come live you all much
Patty chambers curry
Family
October 14, 2021
Romie, as we grew up we tend to move away. However we never forget the memories we created as family. I remember the fun and love shared with the Chambers kids and the Christian kids. Rest in Peace my cousin. Thank you for being Romie.
Charlie Christian and Mitch Gross
Family
October 14, 2021
Calvin, you will always be remembered. You were a great mentor to me and that will never be forgotten!
Stretch
October 14, 2021
Showing 1 - 10 of 10 results