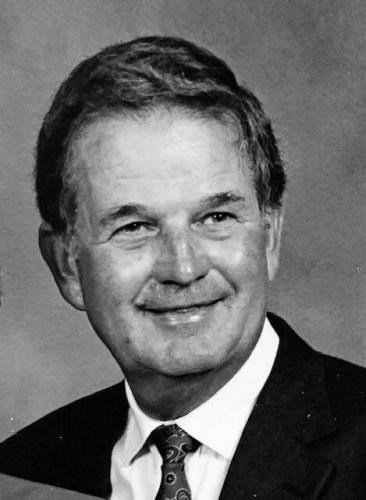 VAUGHNSVILLE — Cletus Martin Schumacher 93, passed peacefully on October 11, 2021, at the Schumacher home place in rural Columbus Grove, where he lived out all his days. He was born there on April 14, 1928, to Joseph and Veronica (Martin) Schumacher. They both preceded him in death.

On August 21, 1953, he married the loving Betty Lou Ramsey, who survives near Vaughnsville.

Martin was the youngest of nine children; he was preceded in death by four brothers, Gilbert, Norbert, Vincent and Alvin Schumacher; four sisters, Alberta Goudy, Salome "Sally" Ladden, Donelda Smith and Margaret Smith; his only son, Jeff Schumacher in 1989 and his grandson Nicholas Schroeder in 2016.

Martin was a graduate and proud alumnus of Vaughnsville High School, class of 1946. He was a U.S. Army veteran, serving 18 months in Korea, returning home in 1952. He was a member of the American Legion Post 516, and the VFW Post 9648, both of Columbus Grove.

Both Martin and his brother, Alvie farmed together for many years before turning operations over to the next generation on what is now an Ohio Century family farm in Putnam County. He was a member of the Sugar Creek Farm Bureau. He spent his working career of 42 years as a freight train conductor on the railroad for CSX. He loved to get together at the monthly breakfast with his fellow RR retirees.

He spent his vacations making memories with family camping and water skiing on Crooked Lake. Martin and Betty spent many wonderful years in retirement including winters in Lake Panasoffkee, FL, where many good times were had in the sunshine fishing and enjoying time with family and friends.

Martin is now safe in the hands of his Lord; "Then sings my soul, my Savior God to thee, how great thou art!"

Visitation will be from 11:00 a.m. until 1:00 p.m., prior to the service on Thursday at Hartman Sons Funeral Home.

In lieu of flowers, memorial contributions may be made to the Jeffrey B. Schumacher Memorial Fund at Crime Victim Services of Putnam County or the Vaughnsville Community Church.

Please take a moment and remember Martin, go online to hartmansonsfuneralhome.com, share a memory and/or your condolences.

Published by The Lima News from Oct. 12 to Oct. 13, 2021.
To plant trees in memory, please visit the Sympathy Store.
MEMORIAL EVENTS
Oct
14
Visitation
11:00a.m. - 1:00p.m.
Hartman Sons Funeral Home
10879 SR 12 West, Columbus Grove, OH
Oct
14
Service
1:00p.m.
Hartman Sons Funeral Home
10879 SR 12 West, Columbus Grove, OH
Funeral services provided by:
Hartman Sons Funeral Home
MAKE A DONATION
MEMORIES & CONDOLENCES
3 Entries
Mart was a wonderful, caring man, and a joy to be around. I really enjoyed his company; had a nice long conversation with him at Alvie's funeral. He will be greatly missed.
Jennifer Young
Friend
October 14, 2021
Remembering the card parties of fun at your house. Always a lot of laughter.! I remember we had a box load of payday candy bars, as a train incident caused a shipment to be wasted....Mart shared with us! Crazy random memories.. overall memories of smiles and friendship and love .God's Peace to your family.
Cheryl (Miller) Moulds
October 14, 2021
Martin always had smile on his face. A great family man. A good man. My parents had plenty of good memories with them.
Patsy Sullivan (Basinger)
October 13, 2021
Showing 1 - 3 of 3 results