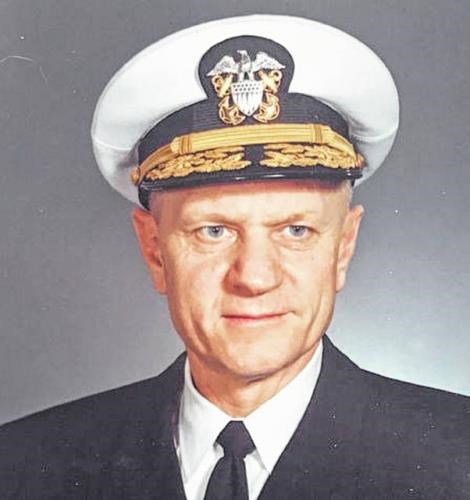 ELIDA — Edward Lewis (Whitey) Feightner was born on October 14, 1919 and died on April 1, 2020. He was raised on a farm near Elida, Ohio and graduated from Elida High School as class valedictorian. He then attended Findlay College on a full-ride scholarship and graduated in 1941.

Immediately following graduation, Whitey enlisted in the Navy V-5 Aviation Cadet Program. He graduated from flight training in April 1942 with orders to VF-5 aboard the USS Yorktown (CV-5), flying F4F Wildcats. Unfortunately, the Yorktown was sunk at the Battle of Midway in June 1942 before he reached it. He was temporarily placed in a squadron in Hawaii where Edward Henry "Butch" O'Hare (namesake of Chicago's O'Hare Airport) was the skipper. Butch started calling him "Whitey" because he never suntanned - he just burned. Seventy-five years later, he was still referred as "Whitey."

Whitey Feightner was then deployed aboard the USS Enterprise (CV-6) with VF-10, flying F4F-4s with Lieutenant Commander Jimmy Flatley as the commander. They deployed to the South Pacific where Whitey got his start as a fighter pilot.

He became a WWII fighter ace on March 30, 1944, when he shot down a Japanese Zero over Peleliu while flying a VF-8 F6F Hellcat from the USS Bunker Hill (CV-17). He would eventually tally 9 confirmed kills and 4 probables.

In 1943, Whitey made the initial landings and catapult launches off the USS Intrepid (CV-11) during its Navy acceptance trials. In 1946, he was checked out in his first jet aircraft: a Lockheed P-80.

Whitey graduated in Class Two of the U.S. Navy's Test Pilot School at NAS Patuxent River, Maryland, and during the ensuing tour as a test pilot, he flew a variety of aircraft from helicopters to the R6O Constitution heavy transport aircraft.

As Navy project pilot for the F7U-1 Cutlass, he was the only pilot to qualify aboard ship in that specific model before the project was abandoned in favor of the F7U-3. As the F7F Tigercat project pilot, Whitey checked out Charles A. Lindberg before Lindberg's evaluation flight in the aircraft.

His next assignment was at the Naval War College, followed by a tour at BUWEPS, where he was the project officer on the F4H-1, later becoming Head of Fighter Design. He would be instrumental in rejecting the F-111 for the Navy, and instead securing the F-14 Tomcat, a much superior aircraft for the Navy.

Next was a tour as Operations Officer with COMCARDIV Two aboard the USS Enterprise (CVAN-65), being one of the senior officers in charge of making "Operation Sea Orbit" (April - October 1964) the first around the world unrefueled cruise with the first nuclear fleet.

Whitey was the CO of USS Chikaskia (AO-54) from November 1963 - February 1966, and then commanded the USS Okinawa (LPH-3) from February 1966 - February 1967. He then had several tours at the Pentagon including Naval Air Systems Command. He was promoted to Rear Admiral on February 1, 1971.

After retirement in July 1974, Whitey and several other flag officers formed FMS (Federal Management Systems) consulting for the Navy. He was also a company representative for United Technologies. Not one to be idle, he spent the next several decades speaking at events and engagements from coast to coast. He was active in various clubs and groups, including the Golden Eagles and Old Bold Pilots.

He was happily married to Violet Beatrice Volz for 67 years. They married in 1948 in Long Beach, California, and she preceded him in death in 2015. In 2016, he relocated from Washington, D.C. to Coeur d'Alene, Idaho with his nephew Jim McBride and his family. Throughout his life, Whitey was known for his pleasant nature and confident leadership. Kind and gracious to the end, he will remain an example of one of the finest members of the greatest generation this world has ever known.

Final internment will be at Arlington National Cemetery

Gifts in his honor may be given to the University of Findlay's Rear Admiral Feightner scholarship fund. (In care of Advancement Office, 1000 N Main St., Findlay, OH 45840)

Air Medal with two Silver and one Gold Star

Legion of Merit with one Gold Star

Congressional Gold Medal (for U.S. Aces, issued in May 2015, in recognition of their heroic service to the United States of America)

Yates Funeral Home has been entrusted with the care of final arrangements. Please visit Whitey's online memorial at www.yatesfuneralhomes.com and sign his guest book.

Published by The Lima News from Apr. 4 to Apr. 5, 2020.
To plant trees in memory, please visit the Sympathy Store.
MEMORIAL EVENTS
To offer your sympathy during this difficult time, you can now have memorial trees planted in a National Forest in memory of your loved one.
MAKE A DONATION
MEMORIES & CONDOLENCES
2 Entries
Wow, Allen County's Finest!
Thank You, Mr. Edward Feightner
For Your, Service!
A True Hero!
April 5, 2020
Thank you for your service sir.
April 5, 2020
Showing 1 - 2 of 2 results