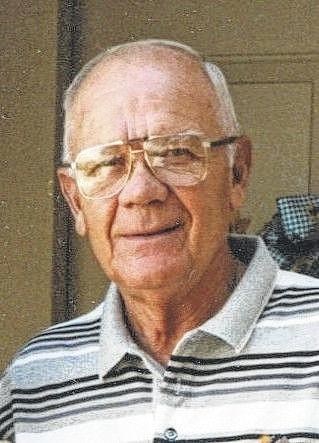 Bob was a 1945 Findlay High School graduate where he played football and basketball.

He was a catcher in the Cleveland Indians Baseball Farm System from 1950-1954 playing in Green Bay, WI, Spartanburg, SC, Cedar Rapids, IA and Reading, PA. He was voted "Rookie Most Likely to Succeed."

Bob was in the first class of inductees into the Hancock County Sports Hall of Fame and was also inducted into the Findlay College Hall of Fame in 1972. He was an avid golfer and enjoyed volunteering at the Memorial Tournament at Muirfield, OH for many years. He was also involved in the PGA West.

His memberships included: B.P.O.E. - forty-five years; Findlay Country Club- thirty-one years; was a charter member of the Optimist Club; was involved in Findlay Youth Baseball from 1948-1973 and was the first president. Bob was a member of St. Michael the Archangel Catholic Church from 1927-1993 and was also a member of Sacred Heart Catholic Church, Palm Desert, CA.

Bob was a long-time resident of Findlay, OH. He and Mary Lou resided in California for twelve years (1991-2002), and in Colorado for five years (2005-2010). For the past five years, Bob was a resident at Fox Run / St. Catherine's Nursing Homes. The family would like to thank these facilities for their loving care.

All family and friends are invited to a gathering at the Knights of Columbus hall immediately following the memorial mass.

KIRKPATRICK-BEHNKE FUNERAL HOME is assisting the family with arrangements. Online condolences may be expressed to the family at www.kirkpatrickbehnke.com.

Published by The Lima News from Oct. 20 to Oct. 21, 2015.
To plant trees in memory, please visit our Sympathy Store.
MEMORIAL EVENTS
To offer your sympathy during this difficult time, you can now have memorial trees planted in a National Forest in memory of your loved one.
Funeral services provided by:
Kirkpatrick-Behnke Funeral Home Inc
MAKE A DONATION
MEMORIES & CONDOLENCES
7 Entries
My sympathies to the Wortman Family in the loss of their father. The Wortman's were our neighbors and playmates in the 60's. My prayers are with you.
Nancy PITNEY Leech
October 23, 2015
What an amazing life your dad had Sarah!! He was blessed as you are to have been his daughter! Our thoughts and prayers are with you, Bryan and your family!
Liz Schaefer and Brian Hile
October 22, 2015
Sarah:
my heart and thoughts of peace are with you, Bryan and your family. I am so sorry you have lost your Dad. He must have been a wonderful man as I know how much you loved him and the obituary was wonderful.
Warmest regards, Michele Boersma
Michele Boersma
October 22, 2015
Never met this man but his daughter Sarah is a jewel!! Prayers to you, Bryan and the whole family. Will be thinking of you this weekend. Love you!
The Dietz family
Sheryl Dietz
October 22, 2015
Prayers to all the Wortman Family. Many fond memories of both your parents. Death leaves a heartache no one can heal, Love leaves a memory no one can steal....
Jalene (Jo) Blanscet (Surfside Beach, TX)
October 22, 2015
I remember Bob playing sports from little on. He was exceptional . Bob was my first cousin and a fine person and athlete. He will be missed.
Eileen (Wortman) Clancy
Westlake, OH
Eileen (Wortman) Cllancy
October 21, 2015
Sorry to hear of Bob's passing. He and my mom, Virginia Ann (Wortman)Place are cousins. I was always fascinated that he was an NFL referee and used to look for him when I watched games as a kid. He sure lived a full life!
Tracy Place
October 21, 2015
Showing 1 - 7 of 7 results