BORN
1964
DIED
2019
ABOUT
Olympia High School
FUNERAL HOME
Quiram-Peasley Funeral Homes - Atlanta
202 NW Vine Street
Atlanta, IL
Douglas N. Long 1964 - 2019
Interlochen, MI—Douglas N. Long, 54, of Interlochen, Mich., formerly of Atlanta, passed away on Saturday, June 1, 2019, at the Munson Medical Center in the loving care of his family.
A celebration of Doug's life will take place at 12:00 p.m. on Thursday, June 6, 2019 at the Dendrinos Chapel & Recital Hall on Interlochen Campus with a visitation for family and friends beginning at 10:00 a.m.
Please share a memory with Doug's family by visiting his tribute page at www.reynolds-jonkhoff.com. The Reynolds-Jonkhoff Funeral Home and Cremation Services is serving the family in Michigan.
Douglas Neil Long was born to Kenneth and Evelyn Elizabeth "Liz" Brandt Long on December 29, 1964, in Lincoln.
Doug is survived by two daughters, Andie Long and Stephanie Long; his father, Kenny Long of Bloomington; one brother, Brian (Rosezona) Long of Petersburg, one sister, Melody (H.E.) Evans of Conroe, Texas; one niece and one nephew.
He was preceded in death by his mother: Liz Long, and his grandparents.
Doug was a 1983 graduate of Olympia High School. He then completed a B.A. in History and Education at Monmouth College, and finally an M.S. in Counseling at Sam Houston State University in Huntsville, Texas.
Doug began his career at Interlochen on the Residence Life staff. He then spent nine years teaching, coaching, and counseling for the Spring Independent School District in Spring, Texas, before returning to Interlochen in 2000 as the Assistant Dean of Students. In 2003, he moved to the Academic and College Counseling department, where he found what he maintained was his favorite position. He led the department for nearly a decade.
Doug was dedicated to the students he served. He took a deeply personalized approach and helped countless Interlochen Academy students navigate some of life's difficult choices. He was a patient listener, thoughtful advisor, and trustworthy advocate. He made a significant, positive impact on many bright young lives.
In addition to the countless hours he devoted to his students, Doug also cherished the time he spent with his family and friends. That time was frequently spent enjoying outdoor activities, beginning with helping on the family farm. He was certified as a ropes course facilitator and was also a trainer of facilitators. When it was time to stop working, he chose to spend his time hiking, canoeing, camping, and golfing.
Memorials may be made to Interlochen Center for the Arts, specifically the Ann and Byron Hanson Endowed Camp Scholarship Fund, Jacobi Citizenship Award Fund, Bob Luby Student Emergency Fund, or Intermediate Girls Scholarship Fund (Dr. Claire Hornung).
A local memorial service will be held later this summer with arrangements entrusted to Quiram-Peasley Funeral Home of Atlanta.
Published by The Lincoln Courier from Jun. 3 to Jun. 11, 2019.
To plant trees in memory, please visit the Sympathy Store.
MEMORIAL EVENTS
Jun
6
Visitation
10:00a.m. - 12:00p.m.
Dendrinos Chapel & Recital Hall on Interlochen Campus
IL
Jun
6
Celebration of Life
12:00p.m.
Dendrinos Chapel & Recital Hall on Interlochen Campus
IL
Funeral services provided by:
Quiram-Peasley Funeral Homes - Atlanta
MAKE A DONATION
MEMORIES & CONDOLENCES
Sponsored by Quiram-Peasley Funeral Homes - Atlanta.
9 Entries
I am numb. Doug and I were close, close friends during his time at Monmouth College. He was a wonderful, funny, and very caring friend to all, and especially to me. He has always meant so much to me. I am sending prayers for his daughters and family, and his Dad. Ah, bud.... way too soon. I love you. Marilee Jackson Kuehl
June 13, 2019
I am so saddened by a wonderful man's life so shortened. In the time he had on this earth, however, he made more of a positive impact than most could hope for. As a new parent of a theatre major in 2015, every meeting with him left me in no doubt of his attention and care for his students. He was frank but always kind and compassionate. I thank his family now, for believing in the work that he did. My daughter, like so many others, saw him as a lifeline to their dreams, always kind, and always present. My deepest condolences to his family on his passing. He will be greatly missed.
Mariann Brown
June 6, 2019 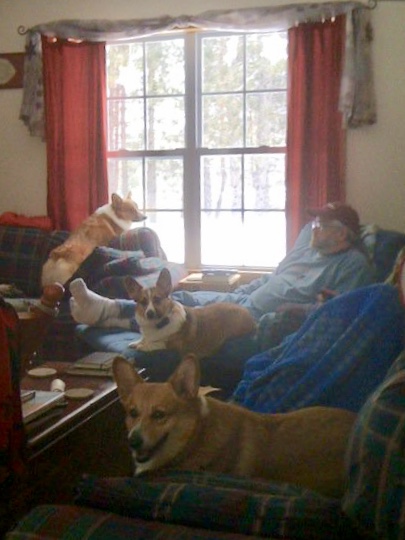 Doug was a faithful and dedicated friend to those he loved - even when it was hard. My husband and I owe him our dignity as we weathered a particularly difficult time in our lives. I am forever grateful that we could count Doug as a patient and supportive friend.

I have included an image of Doug with our corgis on a snowy day in Michigan. All enjoying a winter Saturday afternoon.
Pam Ayres
Friend
June 6, 2019
Pam Ayres
Friend
June 6, 2019
We are so grateful to have been able to spend a bit of time with Doug at Stephanie's graduation. We wish you peace as you grieve. -Robert Buchan and Gwen Groff, Plymouth VT
June 6, 2019
Such a wise, kind, and funny man. His patience with this crazy mom and her high strung musician son for four years and beyond was so very much appreciated. What a loss for his family and the Interlochen community.
Ruth Stonecipher
Friend
June 4, 2019
Wonderful memories of Doug in full kilt cheering on the Fighting Scots at Monmouth College. I will always remember him with a smile on his face which brought a smile to everyone he met. Condolences to his family and many friends.
Philip Eshleman
June 4, 2019
I am so saddened to hear this news. Doug was a year ahead of me at Monmouth College. I have such fond memories of Doug as a resident assistant in my freshman dorm and his being the "mascot" at Monmouth College with his good friend, Dave Riggs. Wearing kilts, the two were there cheering us on the gridiron when many others were not. I had not stayed in close touch with Doug after he graduated, but occasionally would see word about what he was up to. The world lost a good one in Doug's passing.
Daniel Cotter
June 3, 2019
Very shocked and saddened to hear about Doug's sudden passing. Interlochen won't be the same without him. Doug was always there when we needed him. For his beloved family and friends and students, the Farmer family sends its deepest condolences. We hope that the wonderful memories made with Doug will provide some comfort in these difficult days.
June 3, 2019
Showing 1 - 9 of 9 results