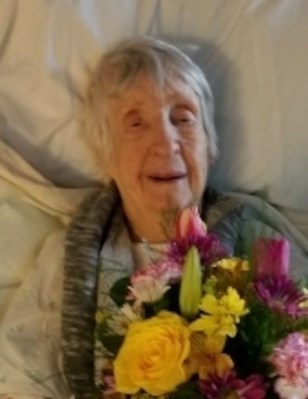 Williamston - On Wed. July 28th, 2021, Marie Chafy , passed away peacefully at home with her daughter, Donna, in Williamston, Mi. She was 103 yrs old.

Born Dec 8, 1917, in Detroit, Marie was the second of 5 children born to Frank and Mary(Saier) Nasemann. She was Baptized Catholic at St. Anthonys Church in Detroit, before the family moved to Lansing , closer to their family in Westphalia, Mi.

Sadly for Marie, her mother passed away when she was only four yrs. old. Continuing with her strong nature and faith, Marie persevered. She was Confirmed at St Marys Cathedral in Lansing in 1925, before return to Detroit to reside with her maternal grandparents,

Following her high school graduation in Detroit, Marie enjoyed working as a timekeeper at the famed Burroughs Corp. in downtown Detroit for more than twenty years . She married Carl Chafy following a divorce from Howard Johnecheck, and they moved to Howell, Mi with Marie's children,Donna and Ronald.

Marie's devotion to her faith and love of family and friends gave her many years of purpose and joy. She belonged to St. Joseph Catholic Church in Howell for almost fifty years. She especially cherished her Eucharistic Minister there, Mary Killeen, and close neighbor Nona Milner.

In 2014, Marie moved to Williamston, Mi . to live with her daughter, but continued her close friendship with Mary and Nona.

Unable to attend mass during her last few years, Marie made it part of her daily routine to participate in TV mass and rosary provided by EWTN. Marie found a great sense of purpose and comfort in family prayers.

Marie will be SO greatly missed, but lovingly remembered, celebrated and prayed for at St Joseph Church in Howell, on Thurs. Aug 5, 2021. Following an available hour gathering, Mass will be celebrated by Fr. Michael Murray at 11 a.m. and followed by burial at Howell Lakeview Cemetery.

Special thanks to Elara Hospice Care of Lansing and Watkins Brothers Funeral Homes MacDonald Chapel of Howell, for their professional and compassionate services.

Published by Livingston Daily Press & Argus from Jul. 31 to Aug. 1, 2021.
To plant trees in memory, please visit the Sympathy Store.
MEMORIAL EVENTS
Aug
5
Service
11:00a.m.
St Joseph Church
Howell, MI
Funeral services provided by:
Watkins Brothers Funeral Homes – MacDonald’s Chapel
MAKE A DONATION
MEMORIES & CONDOLENCES
2 Entries
Our condolences on the passing of Marie. We visited her about 10 years ago in Howell. I remember her being smart and very well spoken, especially for someone in their 90s. I think she enjoyed meeting my kids.
Randy Chafy
Family
August 9, 2021
Offering our deepest condolences during this difficult time.
The Staff of MacDonald's Funeral Home
July 31, 2021
Showing 1 - 2 of 2 results