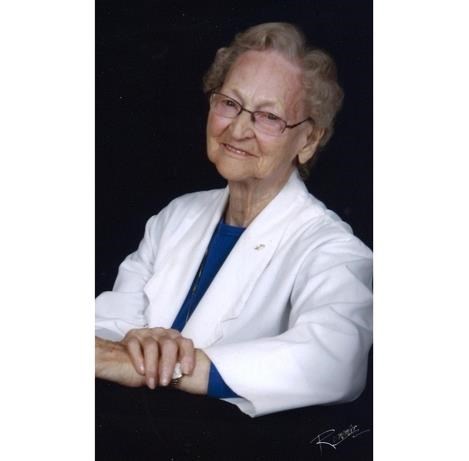 Elva was born to Otto and Sarah W. (Neis) Abel on June 14, 1927 on the Abel family farm east of Eudora, KS on the Douglas County line.

Elva was the Director of Medical Records for LMH and retired in 1992. She was a founding board member of the Eudora Nursing Home, currently Medicalodges. She was a life-long member of EUB Church which later joined with the Methodist Church to form the Eudora United Methodist Church. She was active in Eudora United Methodist Women's Group, Eastern Star, former Scout Leader, member of American Medical Record Association, Democratic Central Committee and many other social groups and organizations.

The family suggest memorials in her name to Eudora United Methodist Church and may be sent in care of the Warren-McElwain Mortuary 120 W. 13th St. Lawrence, KS 66044.

Published by Lawrence Journal-World on Nov. 19, 2021.
To plant trees in memory, please visit the Sympathy Store.
MEMORIAL EVENTS
Nov
20
Visitation
9:00a.m. - 10:30a.m.
Eudora United Methodist Church
Eudora, KS
Nov
20
Service
10:30a.m.
Eudora United Methodist Church
Eudora, KS
Funeral services provided by:
Warren-McElwain Mortuary Lawrence Chapel
MAKE A DONATION
MEMORIES & CONDOLENCES
2 Entries
Jim I a very sorry to learn of the passing of your Mother, I did not know her very well, but she was nice when we did talk. Will be praying for your family. May she rest in peace.. Maggie
Rose Sieber
Other
November 22, 2021
Dear Aunt Marion and family, We are so sorry for your loss. May the angels wrap their loving around all of you at this time.
Kay Sheaffer/ Ron Stalkfleet
November 20, 2021
Showing 1 - 2 of 2 results