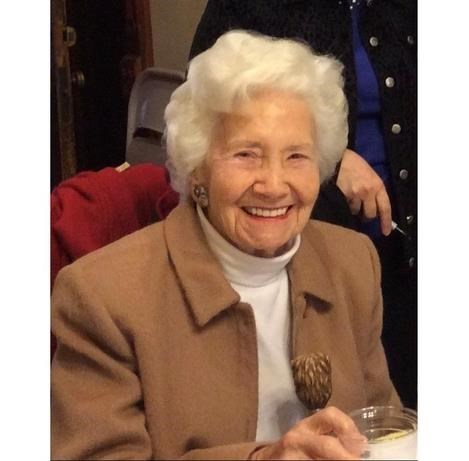 BORN
1923
DIED
2022
FUNERAL HOME
Warren-McElwain Mortuary Lawrence Chapel
120 West 13th
Lawrence, KS
Mary Lou Nelson Penny died to this earth and entered Heaven to see her Lord and God in all His glory on January 9,2022. She was born July 31, 1923 at 1046 Kentucky Street, Lawrence, Kansas to Mary Estelle Nelson and Dr. William Oliver Nelson. She was the 4th and last child born into the Nelson family. She attended Quincy, Cordley, and Pinckney grade schools. Pinckney was where she first encountered her future husband, Junius M. Penny. Her father, being a physician, led to many family members living with them at different times while her mother nursed them through illness or old age. Mary Lou loved growing up in Lawrence and spending summers in Green Mountain Falls, Colorado.

After graduating from Liberty Memorial High School, she attended KU for two years studying in the first Occupational Therapy program offered. She and Jun Penny eloped their sophomore year to marry in Hutchinson where her brother, Jim Nelson lived, on February 6, 1943. It was wartime and Jun (who had enrolled in the Navy Air Corps) was later drafted into the Army because his marriage made him ineligible for the Air Corps. He was trained as a radiation tech, and Mary Lou followed him to each training site thus ending her college endeavors. Before deployment, they had a son and she was pregnant with their second child. When Jun returned from India, he finished his last 2 years at KU earning a degree in civil engineering. Black & Veatch hired Jun to be resident engineer in Caruthersville, Missouri where the young family moved. His father, M.N. Penny, recruited him to operate the Penny's Ready Mixed Concrete business in Emporia which Jun's brother, Charlie, had started. By this time, there were 4 little Penny's with one more to come. Mary Lou was a wonderful homemaker and partner to Jun. They were a team, reflecting a love of people and an open, welcoming home. They never seemed to meet a stranger. Mary Lou, with rare exception, was available for her children when they came home from school providing time for talking about the day's activities or their thoughts.

Mary Lou was active as a Sunday school teacher (wondering later what she had taught, not knowing the Lord), in the Women's Garden Club, and Research Study club as her children got older. She later served on the boards of the Emporia Public Library and the City Parks and Recreation. If she learned of neighbors or friends having trouble, whether financial, marital, or emotional, she tried to help. She took food to those who were ill, and helped several elderly women. She came to know many of the foreign students (from Ethiopia, India, Greece, Thailand, & Taiwan) attending Emporia State, inviting them into their home for meals and visits. She and Jun were the unofficial sponsors for a group of Hawaiian students at Emporia State in the late 50's, and remained in touch with some up until now. There were many women who were close friends to Mary Lou. Carmen and Oscar Hernandez, who had escaped Castro's Cuba losing all they owned except their lives and their son in the 1960's, became dear friends soon after arriving in Emporia. Carmen remained close until her death in 2015. Neither age nor culture proved a barrier in Mary Lou's friendships and outreach. Close to becoming empty-nesters, the Pennys embraced two children of friends from Columbia, South America, the Villarreals, to live with them as family: Johnnie stayed for a couple of years through 2 years of college and Leslie at age 11 stayed just a couple of months, but long enough to call Mary Lou "Mi Penny". When her children left home, Mary Lou took classes at Emporia State, especially enjoying The Great Plains Semester taught by Jim Hoy and others.

Published by Lawrence Journal-World on Jan. 12, 2022.
To plant trees in memory, please visit the Sympathy Store.
MEMORIAL EVENTS
To offer your sympathy during this difficult time, you can now have memorial trees planted in a National Forest in memory of your loved one.
Funeral services provided by:
Warren-McElwain Mortuary Lawrence Chapel
MAKE A DONATION
MEMORIES & CONDOLENCES
6 Entries
Susan, Bill, your families, I have wondered these last years how your mom Was doing, especially when driving by the house. I always enjoyed the too few conversations with her. The love of Christ definitely shone through. Hugs and prayers.
Lori Ruth Lange
January 16, 2022
We are saddened to hear of your loss Susan. Your mother was a bright light in the neighborhood! I was always amazed at how positive she was and how active she stayed. I still remember her coming across the street with her walker on a cold winter day to deliver some of her delicious bread. She wanted us to feel welcome in the neighborhood and we did! Our thoughts and prayers are with you all during this difficult time. With sympathy, Rhonda & Randy
Rhonda & Randy Schademann
January 13, 2022
I want to share a story....my first name is Penny and over the years when I´ve seen your concrete mix trucks around & about I would always try to capture a picture since we shared the same name. I came on to the obits page looking for a neighbor who has recently deceased and perchanced upon your mothers´. I would love to see a picture of her after all these years of playing `same name´ with the trucks. I loved the pink lipstick kisses memory. I´m comforted knowing she´s spending eternity with Jesus, I´ll meet her someday! Blessings to each of you! [email protected]
Penny
January 13, 2022
We are so sorry for your loss. We had the pleasure of meeting your parents on their trip to Uganda many, many years ago. We have such fond memories of their visit and getting to know them. We pray for God's comfort at this time. Jim & Diane Clair Jinja, Uganda
Jim & Diane Clair
Friend
January 12, 2022
Your mother was an amazing woman and I´m grateful for the time I got to know her, while taking care of Juni. They´re together again smiling down at you. My heart goes out to all of you.
Jennifer Shambaugh
Friend
January 12, 2022
Bill and Marlene Paula and I want express our thoughts and prayers to you about about your Mom´s passing! We are sorry to hear that! Our best!!
Miles Schnaer
January 12, 2022
Showing 1 - 6 of 6 results