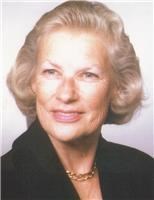 BORN
1922
DIED
2021
This is how I see myself. I have been married twice and have 4 fine sons of whom I am very proud, and 2 stepchildren whom I love very much, and 9 grandchildren, plus 7 step grandchildren, and at this count 6 great grandchildren (including steps).

I tried to be a wife my husband could be proud of, a mother who cared for and loved her children, and a grandmother that the children thought of as fun to be with and who taught them a few important things about life.

BUT, aside from all of that, I have done things I am proud of that really had very little to do with all of the above. Let me tell you a few, call it bragging if you will.

1. Years ago, I started the baby photo service of Dameron Hospital, and it is still going strong.

2. I started many small women's Republican groups with Harriet Peterson of Tracy. These included one in Manteca, Tracy, Oakdale, and Morada.

3. I worked 5 days a week, 8 hours a day, as a volunteer Nurses Aid at Alameda County Hospital, Alameda City Hospital, the blood bank, and the Oakland Army Hospital, who treated the returning wounded from WWII. I took my training at Alta Bates Hospital in Berkeley.

5. I was on the Northern California Board of Directors for the Salvation Army and visited their installations all around the world and gave lectures on their work to local groups.

6. I was President of the Stockton Women's Auxiliary of the Salvation Army and the first woman to be asked to be a regular board member on the men's board.

7. I started the first Travel Club of Stockton along with Reid Travel Associated and that started a career of some 40 years of taking tour groups worldwide, and later cruise groups when they said it could not be done. I was asked to plan the first Circle Pacific Cruise for Holland America Line. I was sent to the South Pacific by Special Expeditions to plan and make the contracts for their ship, The World Discoverer, to do an itinerary that included Santos, Guadalcanal, and the Solomon Islands, Vanuatu, and the head hunting area of the Asmat. That was an experience all by itself. I visited nearly 200 countries and flew on the SST Concorde 6 times.

8. When we could no longer travel, I turned back to politics and started the Citizens in Action Group of Lodi. We had our Tea Party on April 15 (two days after 8 of us got together and said we could do this) and had over 100 people attend, and they wanted more.

9. During the years since I graduated from UC Berkeley, I have always been involved in helping to raise funds for candidates, holding fundraising events, and walking precincts. Jack Williams was even better at it than I was, and I learned a lot from him. He always was my champion and spurred me on and was the best supporter in all my endeavors, and I did love him so very much.

There have been other small achievements that meant a lot to me. I was glad I was able to take care of my mother her last 8 years along with Jack's help, and then his mother until she died. But those listed above have counted to help our country and stayed as viable organizations.

There are a few things that I never experienced:

So who am I? I am the doctor, the nurse, the housekeeper, the bookkeeper, the shopper, the chauffeur, the dish washer, the laundress, the drawer and closet cleaner, the secretary, the typist, the garbage girl, the treasurer, the bill payer, the TV and radio channel program person, the bed turner downer, the hair cutter, the manicurist, the telephone answering service, the cross stitcher, the knitter, the scuba diver, the hang glider, the swimmer, the horseback rider, the boat skipper, the cheerer upper, the gift buyer and wrapper, the card sender, and the party giver. I loved it.

Posthumous Note: "Queen Elizabeth," as she was known by her tour groups, had 11 great grandchildren at the time of her death, and she did eventually win at bingo (many times, thanks to O'Connor Woods).

Please sign the guest book at lodinews.com/guestbook.
Published by Lodi-News Sentinel from Nov. 13 to Nov. 19, 2021.
To plant trees in memory, please visit the Sympathy Store.
MEMORIAL EVENTS
To offer your sympathy during this difficult time, you can now have memorial trees planted in a National Forest in memory of your loved one.
MAKE A DONATION
MEMORIES & CONDOLENCES
4 Entries
Liz will be missed. She had such a great sense of humor, and my parents loved being with Liz and Jack at their many Republican events. I personally got to know Liz at my job out of college working as a travel agent for Reid Travel Assoc. I use to joke when Liz gave you orders to do something you were moving quickly, no hesitation. My mom and I wanted to express our sympathy.
Karen and Maureen Hutz
Friend
November 22, 2021
Grandmother Elizabeth was a gracious, insightful, and overall fun person to spend time with! We will miss her zestful energy and inspiring enthusiasm for good living. Our deepest condolences to the entire Extended Williams Clan. Much Love, from Teri (one of the step grandchildren) and Tim.
Teri ORourke
Family
November 21, 2021
I was the administrator for independent living at O'Connor Woods until 2017 and just loved your mom. She was feisty, a "tell it like it is" woman, and gave me her piece of mind on many occasions. I just got a kick out of her. I learned a lot about her reading her obituary and love that she wrote it. I could just hear her voice narrating her accomplishments. She truly made an impact on her community. Sending prayers to your family upon the loss of your mom. She was one of a kind. Sincerely, Marcia Fitzgerald
Marcia Fitzgerald
November 14, 2021
Good Bye Queen
Yvonne
Friend
November 13, 2021
Showing 1 - 4 of 4 results