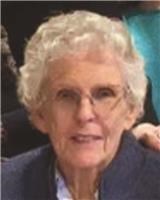 BORN
1931
DIED
2020
Patsy Clark Mahoney died on August 21, 2020 in Lodi, California, after more than a decade-long and valiant battle with dementia. Pat had a strong will to live life fully and in service to others, an unwavering faith in God, and the love and prayers of family and friends. She was a dedicated wife, committed mother, proud grandmother, great grandmother, aunt and friend to many. Pat's strongest trait was her faith - her faith in God and her faith in her husband and family. Even in her journey with dementia, she reached out to others in her community to encourage, support and pray with them. She will be dearly missed by her loved ones and community who celebrate the fact that she is now at peace with her creator and lifelong partner.
Pat was born in February 1931 in Los Angeles California, the second child to Theron Turner "T.T." Clark and Portia Madge Clark. She was predeceased by her sister, Audrey Earnshaw, and her brother, Jack Clark. She is survived by her sister, Marilyn Greiner, and brother, Charles Clark. Her family moved to Sacramento where she went to school, and worked as a draftsperson for Southern Bell. She met her lifetime partner and husband of more than 67 years, Raymond Mahoney, on a blind date and married him in December of 1951 while he was on leave from the U.S. Navy. They resided in Pensacola, Florida while Ray was in the Navy, then returned to manage the Mahoney family Poppy Ranch in Clements, California, and then moved their family to Lodi.
Pat became a leader in the work-from-home movement in the 60's, eventually creating a business which she built over fifty years, Pat's Custom Buttons and Belts. While caring for her family of six children, one with special needs, and her home, Pat focused her creativity, innovation, and attention to detail to custom dressmaking. She helped to design and create award-winning large displays for the California State Fair for the San Joaquin County Department of Agriculture exhibits, which included large mechanized characters and creatures from scenes from favorites such as Alice in Wonderland and Winnie the Pooh. It was always an adventure for her family to go to the State Fair to see the display as the large mechanized creatures had started in her living room or patio waiting for Pat's magic to occur. When the local Fabric Shop and Singer Sewing Company discontinued its custom button and belt covering service, she decided to buy the equipment and inventory and Pat's Custom Buttons and Belts was born. Pat placed display cases in dozens of fabric shops in California over the first few decades. Her superb customer service, attention to detail, and creativity earned her the loyalty of many businesses and customers. Eventually, she was kept busy doing custom work for many tailors, designers, ballet groups, opera companies, and national theater costume designers. She was featured in numerous trade magazines including Threads magazine. She gave an interview to one in which she sums up her love of her craft: "When I started this business many years ago, I had no idea the lifetime of friendships, fulfillment and creativity this business would bring me." She deeply enjoyed any activity which involved using her hands and creating something for others: quilting, machine embroidery, knitting, baking, puzzles, and gardening. She and Ray enjoyed over 60 years of active membership at Saint Anne's Catholic Church, and developed friendships in various Bible study groups. For many years, she attended a week-long Bible study retreat on the California Coast, "recharging her batteries."
Pat and Ray cherished many, many hours out on their patio watching their grandchildren and great grandchildren. Generations of children "painted the fence" with paint brushes and water. Many happy memories were created in their yard for their large family and friends. All were welcome at their home and at their table. They both believed that the greatest legacy one can pass on to one's children and grandchildren is not money or material things accumulated in one's life, but rather a legacy of character and faith. This is how Pat and Ray lived their lives together, with their faith in God, and faith in the love of family.
Pat was predeceased by her husband, Raymond Austin Mahoney, and their son, Michael Patrick Mahoney. She is survived by her children Kathleen Mahoney Papadakis (married to Victor) of Clovis, California; Timothy James Mahoney (married to Michelle Seefried Mahoney) of Citrus Heights, California; Colleen Mahoney Lobaugh of Roseville, California; Gregory Mahoney of Woodbridge, California; and Maureen Mahoney Houx (married to Clark Houx) of Tuftonboro, New Hampshire. She was the proud grandmother of Nicolaos Papadakis, Julie Mahoney, Christa Lobaugh Cordova, Elizabeth Lobaugh, Lindsay Mahoney Hsieh, Lauren Papadakis Vidrio, Kurtis Lobaugh, Drew Houx and Ryan Houx and great grandmother to Madison Clark, Payton Clark, Colin Cordova, Naia Papadakis, Joscelyn Cordova, Mario Vidrio, Wyatt Lobaugh and Everett Lobaugh. She was an aunt and great-aunt to many Clark, Mahoney and Twohey family offspring.
The Mahoney family joined the hundreds of thousands of families who were unable to gather, grieve and comfort one another during Pat's last days and after her death because of COVID-19. We give great thanks to the staff at Brookdale Kettleman Lane who cared for Pat for the last years of her life and for Ray during his last week of life. The Brookdale staff became part of Pat's family. Our family received great kindness during Pat's last days as we were granted access to see her.
A funeral mass will be held on Friday, June 4, 2021 at 10:30 am at St. Anne's Catholic Church in Lodi. The mass will be available via Zoom for those unable to attend in person.
Join Zoom Meeting?at https://us02web.zoom.us/j/82621748292?pwd=S3EwL1pscXpXalJnSnc2ajRwQXBnZz09??Meeting ID: 826 2174 8292?Passcode: funeral

To plant trees in memory, please visit our Sympathy Store.
Published by Lodi-News Sentinel from Jun. 2 to Jun. 8, 2021.
MEMORIAL EVENTS
Jun
4
Funeral Mass
10:30a.m.
St. Anne's Catholic Church
, Lodi, California
MEMORIES & CONDOLENCES
1 Entry
May God bless you and your family in this time of sorrow. I will always remember her kindness for everyone. I am sure your family will miss her and your dad. Love to all of you.
Donna Erlenbusch
Friend
June 2, 2021