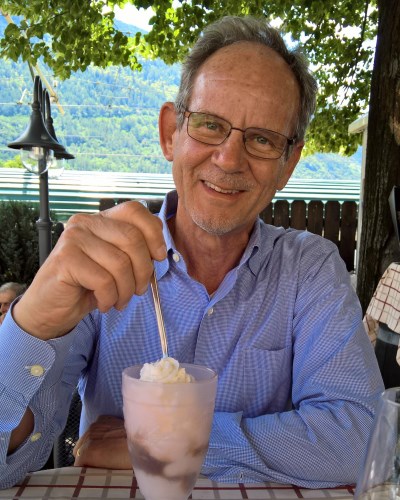 BORN
1955
DIED
May 12, 2021
FUNERAL HOME
Billow Fairlawn Chapel
85 North Miller Road
Akron, OH 44333
On May 12, 2021, the eternal spirit of John F. Wesselhoeft departed this world for the bright hope of eternity. John, of Richfield, Ohio, died after years of treatment for lymphoma and leukemia. He leaves behind his wife, Deborah, their three children, Kirsten (Klaus), Ky (Jenna), and Christian, and three grandchildren. John is also survived by his father, Carl Johannes, and by his siblings, Ruby Dunlap (Robert), Paul (Mary Lou), Ruth Bender (Michael), Carol Kempton (Glen), and Conrad (Marcie). He was preceded in death by his mother, Leota Wesselhoeft, and his sister, Evelyn.

John was born on Dec. 18, 1955, in Mogadishu, Somalia. His childhood years were spent there and at boarding school in Tanzania, before his family relocated to Logan, Ohio in the mid-1960s. John graduated from Logan High School in 1973 and from Case Western Reserve University with a B.S. in accounting in 1977. John was admitted to partnership in the global firm Andersen Consulting at the age of 31, the youngest to make partner at that time. He had a 27-year career there, and he was honored to be among the founding partners and shareholders when the company became Accenture.

John and Deborah were blessed with nearly 42 years of marriage. During their life together, they lived in Bath, Ohio, Bad Soden, Germany, Greenwood Village, Colo., and Litchfield Park, Ariz., as well as Richfield, Ohio. From his childhood in Somalia to his travels as an adult, John maintained a spirit of exploration. He was never at a loss for something to do. His industriousness began with helping Somali friends herd goats, working on farm berry patches, hayfields, and orchards, and doing carpentry and electrical work as he paid his way through college.

John was an analytical thinker. Whether through his BMW motorcycle, his Sprinter RV, or the garden cottage he built at his home in Richfield, John had an abiding interest in building things and understanding systems. He also found great peace in nature. After his retirement, he and Debbie enjoyed gardening, hiking, yoga, daily walks with their two beloved dogs, Rudi and Benji, and traveling on the open road.

John had a servant's heart. He cared for Debbie through sickness and health. As a father, he was always an example of integrity and a dependable source of wisdom and support. As "Pop Pop," he was a favorite playmate of his grandchildren, Stella, Felix, and Meyer.

Throughout his illness and final days, John maintained a happy spirit, giving thanks daily for the rich life he had been given, the blessings of family, and the sustaining hope in the message of Christ.

In lieu of flowers, those wishing to show support may make a donation to Mennonite Central Committee (www.mcc.org). MCC is a global ministry dedicated to meeting basic human needs and building peace and justice, which John and Debbie supported throughout their life. A private memorial will be held at a later date. John Wesselhoeft
To plant trees in memory, please visit our Sympathy Store.
Published by Logan Daily News on May 14, 2021.
MEMORIAL EVENTS
No memorial events are currently scheduled.
To offer your sympathy during this difficult time, you can now have memorial trees planted in a National Forest in memory of your loved one.
Funeral services provided by:
Billow Fairlawn Chapel
MEMORIES & CONDOLENCES
Sponsored by Billow Fairlawn Chapel.
3 Entries
Dear Debbie and family, i am so very sorry to learn of your loss. You and John were on my short list of my favorite people. May you feel the comfort and peace that can only come from our Lord at this difficult time. God bless you. Ken and Janet Graf.
Ken and Janet Graf
Friend
May 18, 2021
Offering our deepest condolences during this time.
The Staff of Billow Funeral Homes
May 16, 2021
John gave me an incredible start to my professional career at Andersen Consulting/Accenture - I enjoyed working with John on all our healthcare projects - John was a man of integrity - he ALWAYS did the right thing even when the RIGHT thing to do was the difficult choice to make. I will miss John - My Deepest sympathy to Debbie, Kirsten, Christian and Ky and John’s other Family and friends who will miss him dearly like I will.
Mark Roman
Friend
May 14, 2021