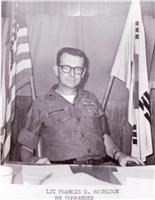 The Mathison family moved to Woodbine in 1941. Gayle graduated from Woodbine High School in 1953 and attended Iowa State College in Ames, Iowa that autumn. He graduated with a degree in education in 1957.

Prior to entering the military service as a commissioned officer in December 1957, he worked for the Iowa State Highway Commission in Des Moines.

Gayle completed the U.S. Army's Air Defense Artillery Officer's Basic Course at Fort Bliss, Texas in May of 1958. For the next two years he served in various training capacities at Fort Bliss. In March of 1960, he was assigned to the 2nd Battalion, 71st Artillery (HAWK) then being formed and trained at Fort Bliss for deployment for Korea.

From this date to his departure from Korea in September of 1961, he served as a platoon leader.

Upon his return to the United States he was again assigned to Fort Bliss, Texas to serve in various schooling, command, training and maintenance capacities.

In October of 1964, then Captain Mathison, attended the Artillery Officer's Advanced Course conducted both at Fort Sill, Oklahoma and Fort Bliss, Texas. From graduation in June of 1965 through July of 1966, he was performed as an advisor to Battery B, 662nd Missile Battalion (HAWK), Republic of China in northeast Taiwan.


The following two years were spent at Fort Sill, Oklahoma in various training and staff capacities with the United States Army Artillery School. In August of 1968, then Major Mathison, started attendance of the Command and General Staff Course at Fort Leavenworth, Kansas.

His following assignment was as Advisor to the Vietnamese 2nd Infantry Division, Quang Ngai, South Vietnam.

In September of 1973, then Lieutenant Colonel Mathison, was assigned to the Safeguard Systems Office, Office of the Chief of Staff, U.S. Army in the Arlington, Virginia area.

Upon his departure from Korea in March of 1976, Lieutenant Colonel Mathison returned to the Military District of Washington.

From then through March of 1977, he participated as a member of the Joint Staff of the Armed Forces Inaugural Committee, an organization formed every four years to plan and execute the U.S. Military's role in the inauguration of the President of the United States.


In this instance, it was for President-elect Jimmy Carter. Thereafter, he served as Deputy Commander, Fort Myer, Military District of Washington. After twenty continuous years with the U.S. Army, Lieutenant Colonel Mathison separated from the service in December of 1977 and moved to El Paso, Texas. From March of 1979 to his retirement in December of 1986, Gayle worked for GTE in El Paso.

Francis passed away on Sunday, August 9, 2020 at Regent Care Center in El Paso, Texas, at the age of 85 years and seven days. He had been at the nursing home for a little over a year. On the first of August, Francis tested positive with the coronavirus and lasted a little over one week.

Francis was preceded in death by his parents. He is survived by his brother and sister-in-law, Gerald (Jerry) and Janice Mathison of Woodbine, Iowa.

A graveside service will be held at a later date at the Woodbine Cemetery. Fouts Funeral Home in Woodbine is in charge of arrangments.
To plant trees in memory, please visit our Sympathy Store.
Published by Twiner-Herald from Sep. 28 to Sep. 29, 2020.
MEMORIAL EVENTS
No memorial events are currently scheduled.
To offer your sympathy during this difficult time, you can now have memorial trees planted in a National Forest in memory of your loved one.
Funeral services provided by:
Fouts Funeral Home
GUEST BOOK
0 Entries
Be the first to post a memory or condolences.