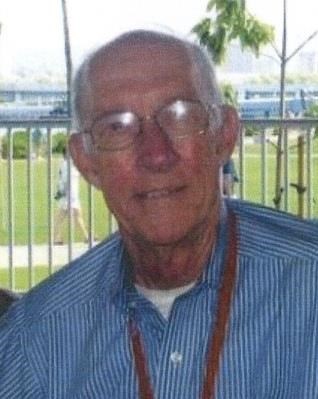 Richard George Baker (Dick), C.P.A., formerly of Nanuet, NY and currently of Tomkins Cove, NY, passed away on August 19th, 2016 surrounded by his loving family. Dick was born on January 4th, 1931 in the Bronx, New York, the son of George Baker and Loretta (Colligan) Baker. He was 85 years old. He attended St. Barnabas Elementary School and Cardinal Hayes High School before graduating from the Manhattan College School of Business in 1952. Dick served in the United States Army in Korea from 1952 to 1954 and was a proud Commander and lifetime member of the VFW Post #3773 in Nanuet, NY. Dick was also a lifetime member of Cardinal McGlosky Knights of Columbus. He was a member of the Nanuet II Senior Citizen Club. He retired from U.S. Life in 1996.

Dick is survived by his loving wife of 61 years, Catherine (Guldner) Baker. Catherine and Dick were married on October 23rd, 1954 in Woodlawn, NY. He was the father of Richard Baker Jr., Kathleen Baker (deceased), Theresa (Mark) Ferretti, Mary (Jim) Kelly, Peggy Baker, and Stephen (Jackie) Baker. He was the loving 'PopPop' of Mark (Kristin) Ferretti, Michael Ferretti, Laura (Travis) Paukert, Kathleen (Ben) Moss, James Kelly, Daniel Kelly, Robert Geremino, Matthew Baker, John Baker, and McKenna Baker. He was the great grandfather of Madeline Moss, Gabriella Ferretti, and a great grandson expected in February, 2017. Dick was deeply passionate about his family and friends and adored his time spent with them, especially at their beach home in Spring Lake, New Jersey. Dick was greatly loved by his wife and family and will be deeply missed.

Visiting hours will be Monday, August 22, 2016 from 2-4 and 7-9pm at Higgins Funeral Home in New City, NY. Funeral Mass will take place on Tuesday August 23 at St. Anthony's Church with burial to follow at St. Anthony's Cemetery. In lieu of flowers, donations can be made in Dick's memory to Birthright of Rockland County.


Published by The Journal News on Aug. 21, 2016.
To plant trees in memory, please visit the Sympathy Store.
MEMORIAL EVENTS
Aug
22
Visitation
2:00p.m. - 4:00p.m.
Michael J. Higgins Funeral Service, Inc.
321 South Main Street, New City, NY
Aug
22
Visitation
7:00p.m. - 9:00p.m.
Michael J. Higgins Funeral Service, Inc.
321 South Main Street, New City, NY
Funeral services provided by:
Michael J. Higgins Funeral Service, Inc.
MAKE A DONATION
MEMORIES & CONDOLENCES
Sponsored by Michael J. Higgins Funeral Service, Inc..
11 Entries
I was so sorry to hear of Dick's illness and passing. I am thinking of all of you at this difficicult time and know that you have many happy memories of the times you spent with Dick and that these memories will help ease the loss a little. Sending you prayers and positive energy. Linda
Linda Sancho
September 4, 2016
Peace and prayers to the Baker family. - Marie Possidento -DeWitt
M DeWitt
August 31, 2016
Many years later and with few contacts in between, the Bakers still feel like "family" and we will miss Mr. Baker.
The Whelan's
Tom Whelan
August 24, 2016
I'll always remember Dick as a gentle, loving, man of great faith. He was Cathy's [and thus, all of NYS Birthright team] strong support in Birthright's mission to save lives. I'm sure he'll continue to support our work from his Heavenly perch. -- Joan Rohr, Rochester, NY
August 23, 2016
We will all miss you so much..our love and prayers go out to Cathy and all your family...
Jeanne Cameli
August 23, 2016
This candle is lit for all the wonderful memories you have shared through the years not only with me but with all the lives you have touched. I will always have you in my heart and will never forget you. Please say hi to my Mom & we will meet one day again. Until then xoxo
Janet Dauro
August 22, 2016
My condolences go out to you and your family. Theresa and Mark were my angels at my time of need and so glad you have them and the rest of your family around you at this time.
Susan Sipple
August 22, 2016
The Manhattan College alumni community shares the grief, and is now praying for our fellow alumni and the family at this time. I know that the Alumni Office has been informed. As well as the Jasper Jottings community that I personally can reach. We are all a little poorer now. "No man is an island, entire of itself ... any mans death diminishes me". We are sorry for your loss.
fjohn reinke (mc1968)
August 21, 2016
My Dear Friend Cathy and her amazing family:
The memories we all have of Dick are all filled with Love and Happy times. I am so sorry that we are not their to celebrate his life with all of you.
We send our deepest sympathy and Love to all of you.
Dotty and Bill
Dotty and Bill Greer
August 21, 2016
Hi Aunt Catherine,
I love you. I'm sorry to hear about Uncle Dick. I'm praying for you and for him. God has guaranteed that those that love him and place full trust in his promise of love and mercy through his son Jesus Christ, through the power of his Holy Spirit WILL have eternal life. :)
Joshua Lindsey
August 21, 2016
Dear Cathy - I am so sorry for your loss. I'm sure Dick is in Christ's arms. I wish I could give you a hug. I will pray for you and the family at Mass tomorrow. Love you!
kath king
August 20, 2016
Showing 1 - 11 of 11 results