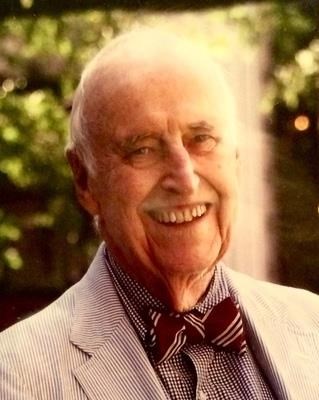 Wm. Theodore de Bary, acclaimed scholar of East Asian thought and a leader in the development of Asian Studies in the United States, died peacefully in his home, Hotokudo, in Tappan, New York, on July 14, 2017. John Mitchell Mason Professor Emeritus and Provost Emeritus of Columbia University at the time of his death, de Bary continued to teach after his formal retirement in 1989. Although weakened by a heart condition, he completed grading the papers for his last course in May, 2017.

de Bary, one of five children born to Mildred and Wilhelm de Bary in Bronx, New York, in 1919, grew up in Leonia, New Jersey. Entering Columbia College as a scholarship student, he began the study of Chinese as a sophomore in 1938. In 1942, while a Master's candidate at Harvard, he was recruited by the United States Navy for intensive training in Japanese and served as an intelligence officer during the Pacific War. He achieved the rank of Lieutenant Commander and worked briefly for the Office of Naval Intelligence in 1946. His experiences in Okinawa, Japan, and China during the war persuaded him of the importance of continuing to learn from East Asian cultures. He always credited his wife, Fanny Brett de Bary, for inspiring him to return to do a Ph. D. at Columbia in 1947. Together with his friend Donald Keene, he studied under Ryusaku Tsunoda, who had recently been released from an interment camp for Japanese-Americans and who became a revered mentor. In 1949, he was a Fulbright fellow at Beijing University when Communist troops arrived in the city.

While still a graduate student in 1948, de Bary was made chair of a committee charged with extending the undergraduate core curriculum in Western civilizations to include Asian civilizations. He recruited gifted colleagues to join him in assembling a series of source books containing translations of major classical and modern texts of Chinese, Japanese, and Indian traditions. These have been updated and revised on several occasions and are currently used as textbooks by numerous universities throughout the world. More recently, Professor de Bary served as editor for an addition to the series covering Korean civilization and encouraged the development of a companion work on Vietnamese civilization by colleagues at Columbia. He went on to author and edited over twenty books.

His last book, The Great Civilized Conversation: Education for a World Community, was published in 2013. In it, he established concrete links among Islamic, Indian, Chinese, Japanese, and Western classics, emphasizing shared understandings of humanity and shared concepts of civility. Reflecting on history's great scholar-teachers and what their methods can teach us today, he reflected on the power of The Analects of Confucius, The Tale of Genji, and The Pillow Book of Sei Shonagon as he experienced them in the classroom.

From 1970 to 1978, de Bary served as Provost of Columbia University, where he worked to balance the University's new endeavors with the values that had inspired him when he first attended the University as an undergraduate. During this time, he raised the endowment for and established Columbia's Heyman Center for the Humanities. Throughout his career, de Bary believed strongly that undergraduate education was a central mission of the university, and he saw this mission as a responsibility to be shared by all segments of the University. He also worked assiduously to promote studies of the humanities as a necessary adjunct to scientific research and professional education. He believed firmly that the classics were best read and discussed between students and faculty in small groups. Teaching pro bono through May, 2017, he learned shortly before his death that his Fall course, "Nobility and Civility," was oversubscribed.

For his scholarship and dedication to human understanding on a global level, he had received the highest awards from the United States, Japan, and Taiwan in addition to many awards and honors at Columbia University. He was awarded the National Humanities Medal by President Barack Obama for helping to bridge differences and build trust by fostering a global conversation based on the common values and experiences shared by all cultures. He was also a member of Japan's Order of the Rising Sun and, in 2016, was honored to be awarded the distinguished Tang Prize from the Tang Foundation in Taiwan for his work in Sinology.

Professor de Bary's wife, Mary Fanny Brett de Bary, of Northport, New York, and his daughter, Mary Catherine de Bary Sleight, pre-deceased him. He is survived by three of his children, Brett de Bary Nee, a professor of Japanese Literature at Cornell University, Paul de Bary, an attorney and financial advisor in New York, and Mary Beatrice De Bary Heinrichs, a teacher at the Academy Hill School, his son-in-law, Victor Nee, a Professor of Sociology at Cornell University, his daughter-in-law, Stefana de Bary, and her son Alexandru Marinescu, and a son-in-law, William Sleight, of San Rafael, California. He is also survived by eight grandchildren and their spouses, William Nee, of Oakland, California, and David Nee, Ned and Katrina Chapman de Bary of Boston Massachusetts, John de Bary and Michael Remaley, of New York City, Cynthia Sleight, of Austin Texas, Johanna and Scott Moringiello, Annalies and Damjan DeNoble, and Lydia Heinrichs, two step-grandchildren and their spouses, Sean and Malia Sleight, and Ryan and Kavita Sleight, three great grandchildren, Theodore and Marco Moringiello and Adelaide DeNoble, and one step-great-grandchild, Elliot Sebastian Sleight. In his last years, he was supported by a group of extraordinary caregivers and by his fellow parishioners at Our Lady of the Sacred Heart Church in Tappan, New York.

A Funeral Mass will be held at Our Lady of the Sacred Heart Parish in Tappan, New York, at 11am on Tuesday, July 18th. In lieu of flowers, donations are requested to be made to the Parish. A wake will be held between 4 P.M. and 8 P.M. on Monday July 17th at the Moritz Funeral Home in Tappan. A memorial service for family and friends is planned for early August.

Published by The Journal News on Jul. 16, 2017.
To plant trees in memory, please visit the Sympathy Store.
MEMORIAL EVENTS
Jul
17
Wake
4:00p.m. - 8:00p.m.
Moritz Funeral Home
98 Route 303 South, Tappan, NY
Jul
18
Funeral Mass
11:00a.m.
Our Lady of the Sacred Heart Parish
Tappan, NY
Funeral services provided by:
Moritz Funeral Home
MAKE A DONATION
MEMORIES & CONDOLENCES
Sponsored by Moritz Funeral Home.
13 Entries
In memory of a great man. A great intellectual, a great friend and a great father indeed a great human being. His legacy will live forever.
Arnold and Cristina Villafuere
Friend
July 10, 2021
As a result of my spending the evening with William, as described in my prior memory, I started reading in the oriental civilization series and years later over dinner with my Stepson suggested to him he might want to study Chinese history, because he loved history, but felt European and American history was overcrowded. He did and as a result became a professor of Chinese history.
Charles Nadler
Coworker
July 11, 2020
Condolences to his family, especially Brett.
Jane Munro Devitt
July 23, 2017
To the Bary Family: My heartfelt sympathies go out to the family and friends during this difficult time. I hope that the promise in 1 Thessalonians 4:14 can bring comfort. Knowing that there's a hope for the ones we have lost in death can be so reassuring.
July 20, 2017
We are the son and daughter of the late Prof. You-lan Feng of China. We met Professor de Bary at Columbia University in 1982 when he hosted our father who travelled from China to receive an honorary degree from Columbia, his alma mater. We don't think we ever adequately expressed our gratitude to, and admiration for Professor de Bary. To his family and friends, we send our deepest condolences.
Chung Liao Feng, Mill Valley, CA
Zhong-pu Feng, Beijing
Chung Liao Feng
July 18, 2017
Though I never had the privilege of meeting Professor de Bary, I heard much about him from his students. And I was heavily dependent on his works, not only for what they taught me particularly about Confucianism in its various forms, but because year after year I assigned them to my own students in Chinese history. He was a giant, with an extraordinary range of learning and a deep concern for those whom he taught. My condolences to his family and friends.
Nicholas Clifford
July 18, 2017
Professor de Bary was the truest of teachers. The seminar I took with him at Columbia, "Nobility and Civility," was one of the catalysts in my personal outlook and development. What I learned there still shapes my thoughts on what it means to live with meaning and authenticity. He absolutely changed the course of my life, and I am so grateful to have known and learned from him. My deepest condolences to his family for their loss. Rest in peace.
Hannah D'Apice
July 17, 2017
Professor de Bary was a transformative figure through his rigorous scholarship and his dedicated promotion of Asian literature. He had a remarkable effect on my life: first, through his two-volume source book of seminal Asian texts. Their literary charge broadened my college kid's understanding of Asian religions and cultures. Later, Professor de Bary served as a consultant to The Translation Center when I was its executive director. There, too, he brought literary translations that gave our readers a newfound sense of the depth and breadth of Asian literature. Scholars as agents of change are rare indeed and Ted de Bary was one of the best. He will be sorely missed.
Dallas C. Galvin
July 17, 2017
Prof. Wm. T. De Bary was a towering figure in the field of Asian Studies--one of our great pioneers. While a grad student in EALAC at Columbia, I was fortunate to serve as a TA for a core course on Chinese Civ that he taught. His immense erudition and boundless spirit touched all of those who studied with him or read his books, and will continue to do so for a long time to come. My condolences to his family.
Andrew Field
July 17, 2017
I met Professor De Bary in 1968, when I was a member of the Ad Hoc Faculty Group protecting the students who had seized a building from the polce. He was standing next to me performing the same service. I knew of him from a former classmate, who had taken classes with him at Columbia College. I had returned from the Navy in 1964, and was in graduate school studying philosophy and teaching the Contemporary Civilization course. We we're on duty all night and conversed to pass the time. He was a pleasant conversationalist! I will remember that night as I have for the rest of my life! May he rest in peace!
Charles
July 17, 2017
Arnold Villafuerte
July 16, 2017
There are three references to Dr. de Bary in the Bibliography of my interdisciplinary Psychology/Neo-Confucianism thesis at Texas A&M in 1984. He has been a hero of mine for over 1/3 of a century.
J.D. Meyer
July 16, 2017
Deepest condolences to the de Barry family. My thoughts and prayers are with you all. It is an honor and privilege to have known the professor.
Larry Kwan
Parishioner of Our Lady Of The Sacred Heart, Tappan.
July 16, 2017
Showing 1 - 13 of 13 results