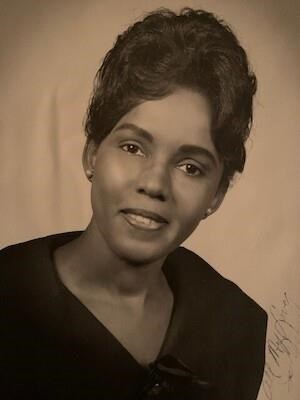 Louisville - 92, of Louisville entered into eternal rest on Saturday, February 20, 2021 surrounded by her family and friends.

Eloise was born in Paducah, KY to the late James Broady Sr. and Mary Elizabeth Short Broady. She was preceded in death by her husband, the late Dr. Robert L. Amos, Jr., her parents, five brothers and four sisters.

Education was always emphasized in Eloise's life. A 1946 graduate of Lincoln High School in Paducah, she excelled at Paducah Junior College when she bravely enrolled with a small African-American group with the purpose of integrating the school for the first time. After moving to Louisville, she enrolled at the University of Louisville full time after working in the university print shop for one year. She would later earn two Masters degrees from Western Kentucky University; one in Secondary Guidance and Counseling and a second one in Principalship and Administration.

Working as an educator for 21 years, Eloise was employed by the Louisville Board of Education as a Business Education teacher and later as Assistant Director of Finance and Assistant Principal for the Tuition Night School and the Tuition Summer School. Upon the merger of the county and city schools, she once again taught high school Business Education courses for fifteen more years until retirement for the Jefferson County Public Schools in 1989.

To plant trees in memory, please visit our Sympathy Store.
Published by Courier-Journal from Feb. 26 to Feb. 28, 2021.
MEMORIAL EVENTS
Mar
5
Visitation
3:00p.m. - 5:00p.m.
A.D. Porter & Sons Funeral Home Downtown
1300 West Chestnut Street, Louisville, KY 40203
Funeral services provided by:
A.D. Porter & Sons Funeral Home Downtown
GUEST BOOK
Sponsored by The Courier-Journal.
6 Entries
Joan, I was so sorry to hear about your mom! I don´t know if you remember but I met you both through Marya when you were in Chicago one year! I´m so glad I did! Your mom was the loveliest and classiest of ladies! My thoughts and prayers are with you! Take care!
Susan Cody
March 6, 2021
Ms. Amos was my teacher at Southern High School. In later years we reconnected through being neighbors. She was the most gentle soul who always had a smile and a kind word. She will be missed by all her neighbors. My thoughts go out to Joan during this time.
Denise Mathewson
March 5, 2021
I mourn the loss of Eloise Broady, and share the sorrow of her daughter Joan - my classmate and friend. Ms Broady was always a joy to be around, as during our college years she continually encouraged us to grow academically. I will miss her smile and gentle manner. May her family be comforted in the knowledge that she has gone on to forever be in the presence of her Lord.
Reed Kimbrough
March 2, 2021
Joan, I just learned that Eloise made her transition to be with the Lord. She had the most beautiful spirit and was dedicated to service. I truly enjoyed working for her. Eloise was so proud of you. She will always in your heart. May the Lord bless you and heaven smile upon you. Vic in Madison, WI
Vicki Bankston
March 1, 2021
I had Miss Amos as a teacher when I was in high school. I thought she was the most beautiful woman I have ever seen. She was so elegant and kind. I remember her fondly.
Pamela Scott
March 1, 2021
I am sending prayers and condolences to Joan and family and God will take care of you and she was a lovely and kind person.
Mildred Townsend
February 26, 2021