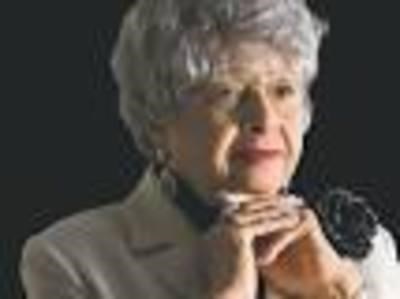 Georgia Lee Montgomery was born to Ben Gore and Frances Walker Montgomery on October 29, 1923 in Springfield, Kentucky. Georgia was brought to Louisville by her parents at the age of seventeen months, after a tornado destroyed their home. She grew up in West Louisville on Grand Avenue with eight brothers—Georgia was the only girl. She attended Mary B. Talbert School, Virginia Avenue Elementary, Madison Junior High, Central Colored High School and Louisville Municipal College. Georgia accepted Christ at the age of sixteen after becoming a member of Ferguson Memorial Presbyterian Church. She became a member of New Life Seventh Day Adventist Church in 1998 and was baptized. Georgia Powers' political career began in the 1962 Senate campaign for Wilson Wyatt. A history maker and civil rights activist, Powers led the Allied Organization for Civil Rights in promoting statewide public accommodations and fair employment law. She was one of the organizers of the 1964 March on Frankfort supporting equity in public accommodations. After working at the Democratic campaign headquarters, Powers became a candidate for the Kentucky State Senate, 33rd District. Senator Georgia Powers was elected in 1967 as the first African American and first woman elected to a full term, serving 21 years until her retirement in December 1988. Georgia Powers was Kentucky's original drum major for justice and equality. During her tenure in the Senate, Powers authored more than 150 bills, including statewide fair housing legislation and sponsored bills prohibiting employment, sex and age discrimination. Senator Powers also supported legislation to improve education for the physically and mentally disabled. Powers continued her work as an author, as an activist and as a sought after lecturer. "Senator" as she was affectionately and respectfully called, authored four successful books: her autobiography, I Shared the Dream; The Adventures of the Book of Revelation, a Bible Prophesy; Celia's Land, a biography of her great aunt, and Dr. King's Last Day. She received hundreds of awards and honors, including five honorary doctorate degrees from University of Kentucky, University of Louisville, Kentucky State University, Spalding University, and Simmons College of Kentucky. At the age of 81, Senator Powers was elected First Vice President of the Louisville Branch NAACP and served with distinction for ten years.

Georgia was married to Norman Frederick Davis who predeceased her. They had one son, William "Billy" Frederick Davis, Sr. who had two sons, Don Frederick Lamont Jones and William Frederick Davis, Jr. Georgia married James L. Powers in 1973, who died July 5, 1996. Her son "Billy" died one month later on August 15, 1996. Senator Georgia Montgomery Davis Powers died surrounded by her loved ones in Louisville. She was 92. Georgia Powers lived a blessed life. Above all, she wanted to share how her life changed in 1984 when she learned what it meant to be a true Christian, treating everyone with respect, dignity and love. Georgia Powers leaves to cherish her memories: two stepdaughters, Cheryl A. Campbell and Deborah Rattle; two grandchildren: Don Frederick Lamont Jones and William Frederick Davis, Jr.; four great-grandchildren: Autrice Jones, Brandon Davon Davis, Nikáya Oliver and Jacoby Johnson; three brothers Phillip (Rose Marie), James I. (Marie Ann) and Lawrence F. (Violet L.) Montgomery, along with many nieces, nephews, cousins and friends.

A memorial service will be held at 2:00 p.m. Thursday in the Capitol Rotunda in Frankfort where Senator Powers will lie in state from 1:30 p.m. until 4:00 p.m. Visitation will be held on Thursday at St. Stephen Church, 1018 South 15th Street, Louisville, KY 40210, from 6:00 p.m. until 9:00 p.m. The funeral service will be held at 11:00 a.m. Friday at St. Stephen Church, followed by a motorcade on the Georgia Davis Powers Freeway. A service of committal will be held in Cave Hill Cemetery. Expressions of sympathy may take the form of contributions to the Emma L. Minnis Junior Academy, 1939 Magazine Street, Louisville, KY 40203, or the Louisville Branch NAACP, PO Box 161173, Louisville, KY 40256. Hathaway & Clark Funeral Home Inc. is in charge of arrangements.

You have my deepest sympathy in the loss of your sister. She was a great woman, a lady who got things done. She will be missed.
Just last May, 2015 I honored her at my church( Quinn Chapel AME) during Women's Day, "Hats Off To Women". I have known Georgia since 1968, she was like a member of the family.
I will keep the family in my prayer.
Faye Owens
February 4, 2016
I met Senator Powers when I began my employment with the KY Legislative Research Commission. I felt a kinship with her, and felt she always had my back. She ably represented her constituents and in the process made Kentucky a better place for us all. While astute at playing the game of politics, she never got lost in the game, always mindful that her issues and votes impacted real people.
Vida Mirray
February 4, 2016
Senator Powers was an awesome woman of God. May the favor of God overflow in the lives of the family during this time of bereavement. She shall be missed!
MaryFrances Stiner
February 4, 2016
Senator Powers was a remarkable Woman to have known. I am very glad I got to meet her personally. She will truly be missed. God Bless her Entire Family in this time of sorrow.
Gloria & Ivory Hines
February 3, 2016
Thanks for your community and state service. You accomplished many great things in your lifetime. Praying for your family.
Westend Parent
February 3, 2016
Cousin,

I appreciate your life for continuing to make a difference and serving as an example of civil and human rights not just in Louisville or in Kentucky but throughout this nation and the world.