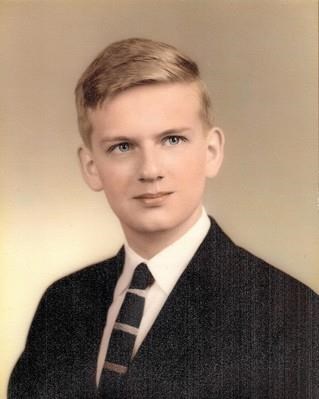 Louisville - James Robert Bentley, 78, was laid to rest in the Rite of Episcopal burial in Cave Hill Cemetery on the afternoon of Saturday, April 18, 2020. Jim died peacefully at his home Wednesday, April 8, 2020.

Due to restrictions in accordance with concerns for the current pandemic, only ten guests were allowed and there were no services other than graveside. In attendance were Mr. Coleman Groves, Mrs. Geralyn Groves, Mrs. Mary McCleod, and Mr. Walter Laughlin. Pall bearers in attendance were Mr. Terry Brown, Mr. Jessie Hagan, Mr. John McCleod, Mr. William Stanley, Mr. Tom Wilson, and Mr. David Zoeller all of Louisville, Kentucky.

Jim was a native of Louisville; born at the old Baptist Hospital on Barret Avenue on February 14, 1942. He was preceded in death by his older brother George William Bentley, his father Francis Getty Bentley, and his mother Katharine Elizabeth Wescott Bentley. Jim was raised in his parents' home on Breckinridge Lane in St. Matthews until 1947 when the family returned to Houghton Michigan to run the Bentley Lumber Company. In 1950, they returned to Kentucky purchasing a home on Old Six Mile Lane in Jeffersontown.

Jim graduated with honors from Eastern High School in 1960 and was awarded an academic scholarship to Centre College in Danville. While at Centre he pledged the Sigma Chi fraternity and formed numerous friendships which remained close until his death. He was graduated from Centre with a Bachelor of Arts degree in History and English in 1964. Returning to Louisville to contemplate his options, a chance encounter in the stairway of the Filson Club led to his being hired as assistant to the Manuscript Curator where he spent the remainder of 1964 and 1965 reorganizing and cataloguing their extensive historical newspaper collection. In 1966, he was surprised to learn that he had been granted a fellowship to study at the College of William and Mary in Williamsburg, Virginia. From 1966 through 1968 while undergoing Masters' studies he worked as a research assistant at Colonial Williamsburg. He was awarded his Master of Arts degree from William and Mary upon completion and acceptance of his thesis in 1971.

While at Colonial Williamsburg he received a letter from The Filson Club offering him the position of Manuscripts Curator which he accepted, beginning the second phase of a twenty-five-year career with that organization. He served The Filson as Curator from 1968 - 1983, Secretary 1972 - 1984, acting Director 1983 - 1984, and Director 1984 - 1992. During his tenure he was instrumental in the acquisition and preservation of the Brennan House, and in 1986 the acquisition, restoration, and enlargement of the Ferguson Mansion on South Third Street as the new, and current, home for The Filson; moving from its overcrowded facility on Breckinridge Street where it had resided since the mid-1920s

Jim's interest in history and genealogy began in his childhood and he is considered among his peers and contemporaries as the foremost genealogist on Kentucky families. His personal and academic research also extends into Vermont, Wisconsin, and Michigan as many of his forbearers were early and notable settlers of these states. His knowledge of art and art history was equally encyclopedic and as a teenager he engaged in correspondence with famed art historian Bernard Berensen.

From 1979 - 1986 he was editor and publisher of the quarterly journal The Kentucky Genealogist.

Due to his significant family heritage, Jim was a member of numerous international genealogical and historical societies and coteries: Since 1968 he held membership in the Sons of the American Revolution serving as a member of the library committee and as Registrar from 1970 - 1993. Three ancestors sailed on the Mayflower and he was a life member of the Kentucky Society of Mayflower Descendants. He served as Governor from 1978 - 1984, Deputy Governor General 1981 - 1987, and on the Five Generation Project Committee 1979 - 1980. Jim also held life memberships in the Vermont Historical Society, and the National Genealogical Society. His additional memberships include the New England Historical and Genealogical Society, the Society of Stukely Westcott Descendants, the Society of Descendants of Robert Bartlett of Plymouth Colony, the Harleian Society, the Edmund Rice 1638 Association, the Honorable Order of Kentucky Colonels, Sigma Chi Clubs, the Order of the Crown of Charlemagne, and he was an Alden Kindred American. He was a former member of the Society of American Archivists and of the Manuscript Society.

Jim was featured in Who's Who in America since the early 1970s.

In April, 2020 he resigned after forty-four years as Kentucky Registrar of the Society of Colonial Wars. This milestone is unmatched by any former officer having served the Society within the Commonwealth and his tenure is believed to have been the longest of any officer within the Society overall. He also served as Councilor to the Society from 1971 - 1976. He will be succeeded as registrar by his friend Jessie Hagan; a choice which would meet with his heartfelt approval.

At the time of his death he was engaged in completing the information required for his acceptance in the Society of Cincinnati, Society of the War of 1812, and the Jamestowne Society.

We will see you in the morning

It is requested that donations in Jim's memory be made to Centre College, Danville, Kentucky. Friends of the library fund.

To plant trees in memory, please visit our Sympathy Store.
Published by Courier-Journal from Apr. 24 to Apr. 26, 2020.
MEMORIAL EVENTS
No memorial events are currently scheduled.
To offer your sympathy during this difficult time, you can now have memorial trees planted in a National Forest in memory of your loved one.
Funeral services provided by:
Pearson Funeral Home
GUEST BOOK
Sponsored by The Courier-Journal.
1 Entry
All of us share this world for a but a brief moment in time.

I knew James when he was Jimmy. We were best friends in Houghton, Michigan during our early childhood. Some of my best memories were spent with him.

I knew Jimmy when he was James, near the end of his life. We reflected on the good times we shared in a long-distant past.

Jimmy, you will always be my forever friend. Judy White
Judy White
Friend
May 14, 2020