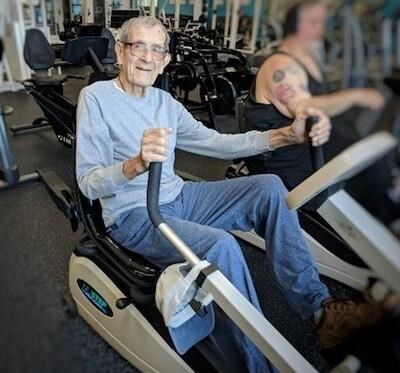 Salem - Joseph C. (Jack) Etzler took the deep six Easter Sunday April 4th in his home of 68 years in Salem. Jack was born in Salem to Ruth Law and George Etzler on Friday the 13th of March,1924.

He was a Salem High School graduate in 1942, WWII Navy veteran attached to the marines in the Pacific Theatre, graduate of Ball State University and voted for more democrats than republicans in his lifetime. He was a Methodist and 60+ year member of Salem Lions' Club.

On Easter Sunday, 4/17/49 he married Jane Marilyn Coffman who passed away October 18,2005. He is survived by a son Scott (Becki) and 2 grandchildren, Erin and Andrew.

Jack always said it would be a crapshoot where his soul would spend eternity but always tried to maintain a lifestyle that kept him out of jail and always tried to live by the Golden Rule.

Jack will be sorely missed by his family and friends. His self-discipline was legendary and he could be seen riding a stationary bike at the Y daily as recently as this march. He was an avid reader, bridge player and sports enthusiast. Jack always greeted with a smile and had a great sense of humor. This quote is a nice summation "Act well your part, there all the honor lies".

Services will be at Dawalt Funeral Home with visitation on Thursday April 8, from 4-8 and services at 11am Friday April 9th with final resting at Crown Hill Cemetery, Salem.

Memorial contributions can be sent directly to the Salem YMCA www.wcfymca.org/donate


To plant trees in memory, please visit our Sympathy Store.
Published by Courier-Journal from Apr. 6 to Apr. 7, 2021.
MEMORIAL EVENTS
Apr
8
Visitation
4:00p.m. - 8:00a.m.
Dawalt Funeral Home
204 East Market Street, Salem, Indiana 47167
Apr
9
Visitation
10:00a.m. - 11:00a.m.
Dawalt Funeral Home
204 East Market Street, Salem, Indiana 47167
Apr
9
Funeral service
11:00a.m.
Dawalt Funeral Home
204 East Market Street, Salem, Indiana 47167
Funeral services provided by:
Dawalt Funeral Homes Inc
GUEST BOOK
Sponsored by The Courier-Journal.
4 Entries
Jack was a wonderful, kind, and generous man that could make you wince with the strength of his handshake while he made you fall out with his latest antic or joke. He treated my wife and I like close family giving us many reasons to visit Salem throughout the years with his bikes, his books, his stories. We'll miss him very much.
George & Jane Hurst - Dyer
Friend
April 9, 2021
I was blessed to meet Jack a couple of weeks ago. His sense of humor and spirit inspires me. RIP .
Michelle
April 8, 2021
Sincere Condolences!
Martha Smith
April 8, 2021
Sorry for your loss, Thanks for serving our Country, you will be missed at the Y !!!!
Michele Thomas
April 8, 2021