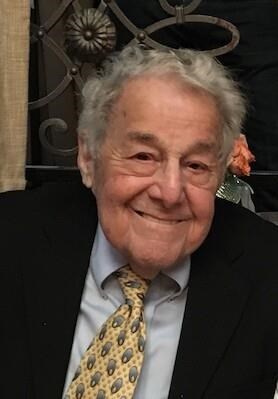 Louisville - Native Lewis "Sonny" Bass passed away December 11, 2020 from Covid-19 at the age of 99 years at Baptist Health Hospital.

Sonny was a Louisville original and community treasure - entrepreneur, philanthropist, community leader, University of Louisville supporter, Kentucky Colonel, amateur magician, competitive athlete, softball coach for over 30 years at the Jewish Community Center, mentor and friend to many and always ready to lend his opinion on making you a better person.

Most importantly, he was a loving husband, father, grandfather and great-grandfather. He loved to travel the world with Gladys, his wife and best friend of 74 years, and family, and enjoyed every minute of it.

His family was the most important part of his life.

Born on June 5, 1921, Sonny lived in the West End at 10th and Walnut and loved helping his parents run the Joe Bass Men's Clothing Store and proud of his upbringing and the friends he made there before moving to the Highlands.

Sonny graduated from Male High School in 1938 then spent one year at Western Military Academy in Alton, IL, where he played football and basketball. He was an alumnus of Miami University of Oxford, Ohio, and the University of Louisville where he was a three-year football letterman ('40-'41-'42) and a two-year letterman in basketball ('40-'41).

In the summer 1946, Sonny was with friends in Cincinnati and saw an old friend, Herschel Lowenthal, with a very pretty young lady, his sister, Gladys. Long story short, they were married shortly thereafter and they just celebrated their 74th anniversary this past October 20th.

When he returned to Louisville, he partnered with his first cousin, Charles Weisberg, to co-found Bass & Weisberg Realtors in 1952, which he managed for 30 years. Originally showing homes by taking the bus.

Sonny was a co-founder along with David Jones, Wendell Cherry and Charles Weisberg, originally of Heritage House of America, in 1961 which started as a nursing home business, later to become the country's largest (41) and changed the name to Extendicare and then sold them in 1972 to focus on hospitals. In 1974, the name was changed for the last time to HUMANA to better reflect its mission, eventually selling the hospitals and remaining in the insurance business. Sonny served on Humana's board for several decades as the company grew to a healthcare industry leader and Fortune 500 company as it is today.

He was also a partner in Associated Theatres, which grew to 60 screens in the region. He was an astute investor and businessman, and helped mentor many Louisvillians with their business careers and always ready to give advice from his experiences.

Sonny was a gifted tennis player and played competitively into his golden years. He was ranked #1 in senior tennis in Kentucky for 10 years in singles and doubles; won a gold medal at the Maccabi Games in Israel in 1986; and played on Louisville's Volvo Tennis Team that won a national championship in 1989.

As an accomplished amateur magician, Sonny loved teaching children magic at Maryhurst, Brooklawn, Boy's and Girl's Haven and Junior Achievement, all organizations he also supported financially. He was a member of the Louisville Magic Club; the Ft. Lauderdale and Boca Raton Magic Clubs in Florida; and was a member of the International Brotherhood of Magicians, and the Society of American Magicians.

To his final day, Sonny loved making people smile and was known for making little dogs out of Mardi Gras beads for every restaurant hostess, server and any person he ran into, or showing them a quick card trick…just to have them smile…as he used to preach "It only takes a minute to give a little joy and see a smile."

A huge supporter of University of Louisville, along with Mason Rudd, Sonny and Gladys donated the seed money for UofL's Bass-Rudd Tennis Center, the first sports facility built in Cardinal Park on campus.

The couple's support for UofL continued over the years such as the generous gifts of the UofL chimes in the clock tower on campus, the 6ft bronze Cardinal bird, UofL's mascot, welcoming students to the Student Activity Center and a major gift in 2008 towards the "Gladys and Lewis "Sonny" Bass" Family Scholar House on Hill St. close to the UofL's campus.

Sonny and Gladys truly loved hosting the University of Louisville basketball and football players at their home for many years, and continued to mentor a lot of these players till his final days.

Sonny was a member of the Male High School, University of Louisville Athletics and Jewish Community Center Sports Halls-of-Fame. He earned UofL's Hickman-Camp Award and Male High's Distinguished Alumni in 1994 and was named Kentucky Crohn's & Colitis Foundation Humanitarian of the Year.

He was a member of Standard Country Club, Cardinal Golf Club and Boca Tecca Country Club in Boca Raton, Florida, and The Jewish Community Center. Sonny was also a member of The Temple and Adath Jeshurun Synagogues.

Sonny loved his family foremost and was always proud of all of them. He was a blessed man and the family was blessed to have him as their Patriarch.

He was preceded in death by his parents, Joe and Anna Bass and his grandson, Elliott Joseph Bass.

Sonny is survived by his loving wife of 74 year, Gladys.

His sons: Mitchel (Delores) of Parkland, Florida, Ned, and Steve (Terri) of Louisville.

His beloved great-grandchildren Henri, Lily and Bella Zamanian of Louisville.

A special thanks to Michelle and Larry Smith who were wonderful caregivers and to his amazing personal physician, Dr. Carmel Person. Likewise, Dr. Gary Fuchs and Dr. Britt Brockman. As well the wonderful nurses and doctors at Baptist Health dealing with COVID-19.

Due to the pandemic, there will be a private burial. Funeral arrangements entrusted to Herman Meyer & Son, Inc.

To plant trees in memory, please visit our Sympathy Store.
Published by Courier-Journal from Dec. 12 to Dec. 15, 2020.
MEMORIAL EVENTS
No memorial events are currently scheduled.
To offer your sympathy during this difficult time, you can now have memorial trees planted in a National Forest in memory of your loved one.
Funeral services provided by:
Herman Meyer & Son Inc.
GUEST BOOK
8 Entries
Our most sincere condolences to the family. A wonderful person has left us but memories will remain forever.
John B. Henley II
January 14, 2021
On behalf of the Honorable Order of Kentucky Colonels, the Order offers its deepest condolences and is proud of a life well lived by Colonel Bass. Sherry Crose, Executive Director Honorable Order of Kentucky Colonels
Sherry Crose
December 21, 2020
My deepest condolences to the Family and friends of Sonny Bass.
He truly loved every one he met. Always leaving you with a smile and encouraging words.
A pillar to the community in every imaginable way. He will be missed by me, and everyone whose lives he touched. My life is better because I had the privilege, to meet and know him.
Mark Chase
Acquaintance
December 14, 2020
Steve, Terri and the entire Bass family,
I am so very sorry for the loss of Sonny Bass. I work where he lived since he moved in, he was a great guy and I will miss him.
Ray Webb
Ray Webb
Friend
December 13, 2020
Fond memories of the house on Country Club Lane, and the many nights spent with my friend Mitchell. Mr & Mrs Bass were so sweet, and always had a smile on their faces. Also, they had the best cold milk dispenser in Rolling Fields, and the pool in the back was pretty sweet too. My sincerest condolences to Mrs Bass, Mitchell, Ned and Steve, but also a celebration for the joy and accomplishment in a life well lived by Sonny Bass. We were all lucky to have him in our lives.

Jim Gray
Buckner, KY
Jim Gray
Friend
December 12, 2020
Steve, Terri and the entire Bass family,
I am so very sorry for the loss of Sonny. I have many fond memories of him, he always made me smile. The was no other like him. What a wonderful man. My thoughts and prayers are with you all.
Sherry Boston
Friend
December 12, 2020
Our community has lost an icon to COVID-19. I've known Mr. Lewis "Sonny" Bass for over 40 years. He was my first small business mentor. I met Mr. Bass when I was about 20 years old, when he volunteered at the Louisville SCORE office. I saw Mr. Bass in the airport, a few years ago, and I reminded him of where we first met. He pulled a small string of red beads from his pocket and quickly twisted into the shape of a small dog. He handed it to me. I have carried this gift from him, in my purse, everyday since we reconnected. My condolences and prayers to Mrs. Bass, the entire Bass family and to Michelle and Larry Smith.
Teresa Bridgewaters
Friend
December 12, 2020
Deeply saddened to learn of Sonny Bass' passing. The wonderful obituary tells the whole story. Bottom Line -- Sonny Bass was one of the MOST significant Louisvilleans of the last 80 years. I know of no one who has made a contribution that even approaches Sonny's contribution to our City -- than Sonny Bass.

Rest in Peace Sonny - you have lived a wonderful life and have honored the Ancient Greek tradition of leaving your community far the better for your presence in it.
J. Bruce Miller
Friend
December 12, 2020