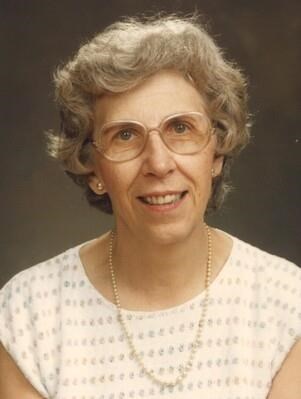 Louisville - Mary Kathryn (Kay) Selby Laird, a long-time resident of Louisville, Kentucky, passed away peacefully on March 2, 2020 in Lawrence, Kansas. Daughter of Errett and Eva (Williams) Selby, of Columbus, Ohio, Mary Kathryn was born on September 18, 1923. She was raised in Columbus, graduated from North High School and attended Ohio State University where she earned bachelor's degrees in French and Spanish Education and an M.A. in French. She taught at Denison University in Granville, Ohio for four years and began a Ph.D. in French at Ohio State. On 20 September 1952 she married Robert K. Laird in Columbus and moved to Louisville where he worked for American Standard. They raised three boys together and continued to live in Louisville the remainder of their lives except for nine years in New Jersey during the 1970s. She taught French and Spanish at junior high and high schools in Louisville and New Jersey, and at the end of her career she spent several years teaching at Walden School. She was for many years a member of Calvin Presbyterian Church, where she served as an elder. While a member of Fourth Presbyterian Church in Louisville in the 1960s, she was one of the first female elders in the state of Kentucky. She was a lifetime member of the American Association of University Women.

She was preceded in death by her husband in 2007. She is survived by three sons: Douglas (Demetria) Laird of Hopatcong, NJ; Paul (Joy) Laird of Lawrence, KS; and David (Mary Beth) Laird of Pewee Valley, KY; five grandchildren: Chris (Marie), Sarah, Caitlin, Emma, and Elijah; two great-grandchildren: Chase and Avalyn; a nephew, Tom Selby of Lakewood, OH; a niece, Patti Stiles of Pickerington, OH; and a sister-in-law, Peg Reasoner of Columbus, OH. The love, grace, and gentleness that she brought to everyone will be remembered. The Laird family thanks the loving staff of Lawrence Presbyterian Manor for the wonderful care that they gave Kay Laird from the time that she moved to Lawrence in October 2018, and also thanks the Douglas County Visiting Nurses who supervised her hospice care.

A memorial service will take place at Calvin Presbyterian Church, 2501 Rudy Lane, Louisville, KY on Friday, June 4, 2021, at 10:00 AM. The family requests that masks be worn by those attending.


To plant trees in memory, please visit our Sympathy Store.
Published by Courier-Journal from May 13 to May 23, 2021.
MEMORIAL EVENTS
Jun
4
Memorial service
10:00a.m.
Calvin Presbyterian Church
2501 Rudy Lane, Louisville, Kansas
Funeral services provided by:
Warren-McElwain Mortuary
MEMORIES & CONDOLENCES
Sponsored by The Courier-Journal.
2 Entries
Mortar Board was proud to claim Kay as a member of our national society of scholar-servant-leaders. Please know of our deep sympathy and most sincere regard for the way that she lived Mortar Board´s Ideals of scholarship, leadership and service. Jane Hamblin, Chief Executive Officer, writing from the National Office of Mortar Board Columbus, Ohio [email protected]
Jane A. Hamblin, CEO, Mortar Board
Other
May 21, 2021
I am sorry for your loss. Kay was a friend of my Mom (Doris Zollner) at Brownsboro Park. I live in Overland Park and we used to talk about her coming to my neighborhood. Such a sharp and kind woman. I am sure she will be missed.
Suzanne Moore
May 17, 2021