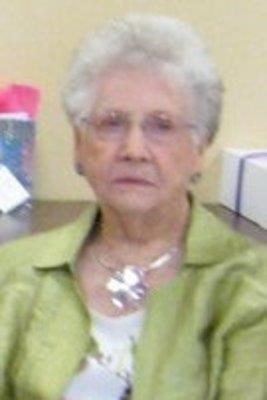 She and family moved to Valley Station, Kentucky in 1975 when her husband Lt Colonel Mullins, retired from the U.S. Army. Mary was a professional registered parliamentarian and had three great passions, her family, her church, and service to her community. She loved teaching and practicing the principles of Parliamentary Law and serving as Parliamentarian for local, state national and international organizations.

Mary was a member of Bethany united Methodist Church and had served five years as Chairman of the Board.

Mary's wishes were for her services to be private arrangements are entrusted to advantage funeral home Hardy chapel 10907 Dixie Hwy.

To plant trees in memory, please visit our Sympathy Store.
Published by Courier-Journal on Apr. 29, 2018.
MEMORIAL EVENTS
No memorial events are currently scheduled.
To offer your sympathy during this difficult time, you can now have memorial trees planted in a National Forest in memory of your loved one.
Funeral services provided by:
Advantage Funeral Home and Cremation Services Hardy Chapel
GUEST BOOK
Sponsored by The Courier-Journal.
13 Entries
My most sincere sympathy to the family of Mary. She was a gracious lady with a quick humor but also had the ability to be a great leader and no nonsense. GFWC Kentucky will miss her. Rest In Peace Mary.
Susan Alexander
May 1, 2018
I sat on many boards and committees over the years with Mary. Almost every positive project and improvement in SW Jefferson County has Mary's influence in it.
Bill Hardy
April 30, 2018
I am so sad to hear about Aunt Mary. She was a gracious, smart, talented and beautiful lady with a good soul. I shall miss hearing from her. Prayers for Michael, Jenny, & families.
Love,
Jean Mullins Schneider
Jean Schneider
Family
April 29, 2018
Michael, Jenny and families,
Please accept my condolences. Aunt Mary was a very special lady and she was loved by all of us. We used to look forward so much to her and Uncle Harold's visits to Roanoke. Mary has kept in touch with us through the years and we loved hearing from her and getting all the family news. She will be missed but we have good memories and will keep them in our hearts. You are all in our thoughts and prayers.
Myrna and family
Myrna Mullins Trussler
April 29, 2018
Mike and Judy, Sandy and I send our love and prayers. In reading your Mom's obit I was more than impressed with her accomplishments in life. I know you were very proud of her and will cherish her memory. Thinking of both of you.
Joe Cantrell
April 29, 2018
Judy and Mike, I send my sincere sympathy in the loss of this lovely lady. My God comfort you.
Mary Clemmer
April 28, 2018
So sorry to hear of Marys passing. She showed all of us every day how to treat others with a graciousness that you do not see anymore, she was a great lady and cared deeply for her family and community. She will be missed.
Diana Baird
April 28, 2018
I am so sorry to hear about Mary's passing.
She was a dear friend for many years. She will be dearly missed.
Alice Kendrick
April 28, 2018
My condolences on Mary's passing
i will be forever grateful for her assistance in my
Ph.D. dissertation. She gave me documents from her board of director membership years on the Kentucky Health Systems Agency-West that I used and cited in my dissertation.
David Houvenagle
April 28, 2018
When I became involved with KFWC (now GFWC Kentucky) and attended conventions, there was always this beautiful, no nonsense Southern lady at the head table serving as parliamentarian. Get her away from that table, though, and she could have you rolling on the floor with her wit. Mary will continue being an inspiration to me.

Please know that others will miss her too.
Pat Harrington
April 28, 2018
Mary Mullins will be missed by all her Federation Sisters. She served as a mentor and advisor to all! RIP sweet Mary till we meet again.
Peggy Barnes
April 28, 2018
Our Dear Beloved Mary, Got to know her through Kentucky Federation of Women's Club. She was committed and loyal to this organization and we respected her judgement on parliamentary matters. Loved her and miss her presence. My sympathy to her family.
Faye Gregory
April 28, 2018
Mary was a great lady and will be missed.
Mary Baisch (FCWC)
April 28, 2018