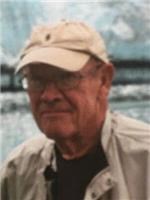 After serving in the United States Navy from 1951 until 1954, he began his career with the General Electric Company in Louisville, Kentucky. Oliver was a talented electrical engineer, manager, inventor and patent holder at General Electric where he worked for over forty years until his retirement in 1995. He was also a past President of the J-Town Rotary, an Eagle Scouts Advisor and was active in mentoring aspiring engineers. He began caddying and playing golf as a high school teenager and maintained a passion and gift for the game of golf throughout his life.

Funeral arrangements are being handled by Ratterman and Sons. In lieu of flowers, a charitable contribution may be made in Oliver's name to Hosparus Health (hosparushealth.org or mailed to Hosparus Health, P.O. Box 35425, Louisville, Kentucky 40232) or St. Jude Children's Research Hospital (stjude.org). A memorial service will be held at a later date.

To plant trees in memory, please visit our Sympathy Store.
Published by Courier-Journal from Jan. 12 to Jan. 17, 2021.
MEMORIAL EVENTS
No memorial events are currently scheduled.
To offer your sympathy during this difficult time, you can now have memorial trees planted in a National Forest in memory of your loved one.
GUEST BOOK
1 Entry
Ollie was a wonderful man who will be missed. We were friends for many years and Ollie and Mary Ann will always be dear to me.
Grace Wright
February 3, 2021