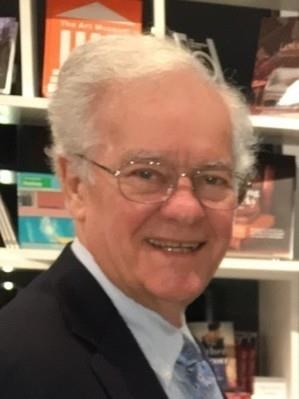 Louisville - Dr. Paul D Simmons, Louisville, Ky passed away March 17th surrounded by his adoring family. He was 82. He was preceded in death by his parents Dewey and LaVerne Simmons, his brother David Simmons, and son Brian. He is survived by his wife Betty, son Brent (Connie), and daughter Catherine (Miguel).

Paul was born July 18th 1936 in Troy, Tennessee. He graduated Valedictorian of Dixie High School; earned a BA in Psychology and English from Union College; received his Th.M. (Master of Theology) and M.Div. (Master of Divinity) at Southeastern Seminary in Wake Forest North Carolina (where he met his future wife Betty Kinlaw);earned his PhD in Christian Ethics (1969) at Southern Seminary in Louisville, (where he taught for 23 years, including two sabbatical years in New Jersey at Princeton Theological Seminary, and in England at the University in Cambridge). After resigning from Southern Seminary, he founded the Baptist Seminary of Kentucky, served on the Council on Peacemaking and Religion, the Advisory Board for the Religious Council on Population, Reproductive Health and Ethics and as President of Americans United for Separation of Church and State, both in Washington DC. He was an Adjunct Professor in the Department of Philosophy at U of L, Louisville Presbyterian Seminary; and taught 20 years as Clinical Professor of Family & Geriatric Medicine at U of L, including 1 year at the UL Dentistry, retiring at 80.

Paul's life's work centered on many important social issues he was passionate about involving Christian & Medical ethics, intellectual and academic freedom of religion, human rights, social justice, and helping those in need. He bravely took on some of the toughest and most controversial social issues including abortion, euthanasia, gay rights, genetic engineering. He brought a deep knowledge of science and relevant religious perspectives. His books included Faith and Health: Religion, Science, and Health Care Decisions, Freedom of Conscience: Baptist-Humanist Dialogue, and Birth and Death: Bioethical Decision Making. In addition, he wrote numerous scholarly articles for various religious, medical, and scientific magazines and journals. He volunteered for Clarence Jordan's Koinonia farms in Georgia (where the concept of Habitat for Humanity was born). He also supported Partners in Development, a Project in South Africa that build water wells, provides education and medical assistance in remote villages.. His Heroes included Dietrich Bonhoeffer, Martin Luther, Nelson Mandela, Martin Luther King Jr, Thomas Merton, and his beloved colleague Henlee Barnett.

Paul was a sports enthusiast. He was captain of his high school basketball team, enjoyed playing baseball, tennis, and golf, and even let his kids goad him into trying ice skating and skiing. Paul cherished his family and loved taking them on trips to grandparents, picnics at the lake, and throughout the US & Europe. He loved his children immensely, encouraging each in their unique abilities and interests.

Paul was a source of inspiration and illumination in many people's lives and will be missed enormously.

In lieu of flowers, memorial donations can be made to Broadway Baptist Church, Partners in Development (water wells in Africa), the Alzheimer's Association, or the charity of your choice.

To plant trees in memory, please visit our Sympathy Store.
Published by Courier-Journal on Mar. 22, 2019.
MEMORIAL EVENTS
Mar
24
Visitation
2:00p.m. - 6:00p.m.
Pearson Funeral Home
149 Breckenridge Lane, Louisville, KY 40207
Mar
25
Visitation
10:00a.m. - 10:45a.m.
Broadway Baptist Church
4000 Brownsboro Road
Mar
25
Funeral service
11:00a.m.
Broadway Baptist Church
4000 Brownsboro Road
Funeral services provided by:
Pearson Funeral Home
MAKE A DONATION
Please consider a donation as requested by the family.
MEMORIES & CONDOLENCES
Sponsored by The Courier-Journal.
5 Entries
I am sorry to hear of the passing of Paul Simmons. I knew him at Union University.
Linda DeLoach Rose
April 1, 2019
Paul was a wonderful colleague and he always had energy and time to listen, mentor and share on our academic journey, all for the greater good. He was a brilliant mind. They don't make em like Paul anymore. What a blessing to have him as a colleague and friend in our Family Med department. Wishing his family and loved ones comfort and peace. His memory will live on.
Dee Antimisiaris
March 26, 2019
So sorry for your loss. God has a blessing in Dr Simmons. Wayne and Sherrie
March 23, 2019
My condolences to the family. I know how much you loved him and appreciated his many contributions to the world. He will be missed greatly by his friends also.
Amelia Debusman
March 23, 2019
Paul Simmons was a wonderful mentor to so many students, teaching us life lessons to become ethically centered and compassionate in our relationships. He was a person of deep integrity and he challenged all he taught or met to never be anything less than honest, loving and fearless in the face of adversity. Once he became your friend, it was forever. Thank you, Paul, for a life well lived and for your example of Christ-like love that we will remember always. Our deepest sympathy to Betty and the family. May God bless you and comfort you. With love, Debarah and Brad Harbuck.
Debarah Harbuck
March 22, 2019