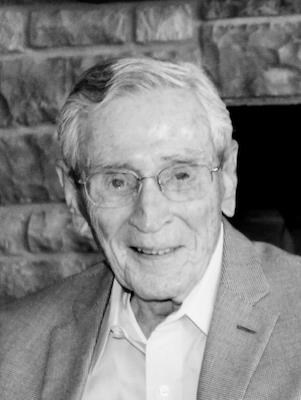 LOUISVILLE - Robert Sidney Tillett (Bob) died one month past the age of 100 on September 5, 2021. He had lived and worked in Louisville KY since 1954. He was born on August 1, 1921 in Syracuse NY. While still an infant he moved to Akron, Ohio, with his mother Elizabeth Walrath and was adopted by Samuel Raymond Tillett. He grew up in Akron. After finishing High School, where he was a standout in academics and cross country track, he started college at the University of Akron and later transferred to Ohio University to finish his Pre Medicine studies. As was common in the Depression, he worked nights (at a tire factory) and attended university classes in the day. Through a combination of work and study, he "put himself" through college. With WW2 looming on the horizon he enlisted in ROTC and had received his 2nd Lieutenant commission. However, after he was accepted to Case Western Reserve Medical School, "Uncle Sam" decided Bob should continue his education, and although he was still in the Army, he was "busted" to private, as the military eligible men who were part of the nationalized medical schools were not allowed to continue Officer status. Even though he went through medical school in 3 years instead of the usual 4, by the time he graduated the war was over and he continued post-graduate training for 2 years before being called to active duty. While in medical school, he met and married the love of his life, North Carolinian Jean Dail. They celebrated their 75th wedding anniversary last December. Jean was on a dietetics study program at the hospital in Cleveland, and yes, they did meet on a street car. The US Army said it was time to go to work, and for the next three years he was on active duty in the Medical Corps, with the rank of Captain. This time included a year in Trieste, Italy, where he was Medical Officer in charge of the military hospital and was accompanied by Jean and his new son Robert Jr. At that time, Trieste was a potential flash point as it bordered the communist state of Yugoslavia, and there was the threat of invasion by the Yugoslavs. He remained in the Army Reserves until 1955. After active duty, he returned to finish his training in Internal Medicine in Chicago. He entered Private Practice in Goldsboro NC for two years and was

invited to come to Louisville by his former Senior Resident in Chicago, John Llewellyn, in 1954. A year later his twin sons David and Edward were born. He lived and practice Internal Medicine in Louisville, retiring from clinical practice at age 69 and continuing work in medical case review until he was 78. At the beginning of his career he was on staff at most of the Louisville hospitals, later limiting his hospital experience to Highlands Baptist Hospital and Methodist Evangelical Hospital. He was joined in practice by Drs. John O'Brien and David Bybee. He served on the volunteer clinical faculty of University of Louisville Department of Medicine affording third and forth year medical students had the opportunity to be mentored by a highly skilled and experienced clinician. In addition to his medical practice, Bob was served a year each as President of the Medical Staff of Methodist Hospital, President of the Louisville Society of Internets, and President of what was then the Jefferson County Medical Society. After Bob retired and Methodist was absorbed by Norton Healthcare, he was a founding member of the "Methodist Mafia" senior physicians group and was active with the GLMS Cato Society. Although he never returned to competitive running (with one exception) after high school, he was a regular runner until his 70's and long distance walker until his mid 90's. His running exception occurred when he and 3 other running buddies in their 50's decided to race a high school girls mile relay team, with unsatisfactory results for the men! Classical music was an early interest, as he recalled listening to Saturday at the Met Opera on the radio as a teenager. His musicianship was quite modest, but as a young adult he obtained a professional harmonica to continue a playing tradition he learned from his mother. History, biography and theater were all interests but more than anything he enjoyed family, including children, grandchildren and great grandchildren. He also had a talent for what are now known as "Dad jokes." And if you didn't laugh enough the first time, he gladly told the joke again. He was predeceased by parents Elizabeth Tillett and Raymond Tillett as well as sisters Betty Tulley, Ann Baker and brother Sam Tillett.

(Allison) and Chris Tillett (Kaitie), and his great grandchildren Harper, Anderson, Charlie and Edie Tillett and Ian Eichbauer. One sister-in-law, Ruth Ann Tillett, survives him, as well as numerous nieces and nephews.

He was over 60 year long member and former Deacon of Highland Presbyterian Church. Due to the Pandemic a Celebration of Life will happen at a later date. Interment will be at Cave Hill Cemetery.

Memorial donations may be made to the Red Cross, Salvation Army, or a charity of the donor's choice.

"He was a man, take him for all in all, I shall not look upon his like again"- Hamlet Act 1, Scene 2

Published by Courier-Journal from Sep. 10 to Sep. 12, 2021.
To plant trees in memory, please visit the Sympathy Store.
MEMORIAL EVENTS
To offer your sympathy during this difficult time, you can now have memorial trees planted in a National Forest in memory of your loved one.
Funeral services provided by:
Highlands Family-Owned Funeral Home - Louisville
MAKE A DONATION
Please consider a donation as requested by the family.
MEMORIES & CONDOLENCES
Sponsored by The Courier-Journal.
0 Entries
Be the first to post a memory or condolences.