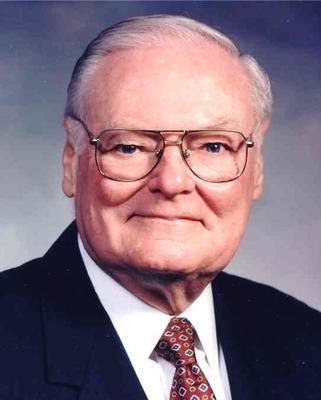 88, chairman emeritus and founder of Sam Swope Auto Group and one of Louisville's most respected and influential civic leaders, died peacefully on Tuesday, December 9, 2014, with family by his side.

Born August 24, 1926, in Lakewood, OH, Swope served as a Petty Officer, Second Class, in the United States Navy from 1943 to 1946. He was assigned as a Mineman with a Diver First Class-rating in underwater mine disposal, and later told friends that he relished his weekends, never knowing if each diving day would be his last. After the service, he earned a degree in marketing from Ohio State University in 1949.

Sam worked as a salesman for Columbus Coated Fabrics in Ohio. In late 1951 he purchased a Dodge Plymouth dealership in Elizabethtown, founding Swope Motors, Inc.

He entered the Louisville market in 1957, opening Swope's Plymouth City on Dixie Highway, and bought a Chrysler Plymouth store in St. Matthews in 1960, shifting to Pontiac in 1961. "That's when I began to make a living," he said. He built the Shelbyville Road Pontiac dealership in 1965, making it the first of the large suburban dealerships in Louisville.

In 1984, he bought 48 acres at I-64 and Hurstbourne Parkway, half of which would become Swope Discount AutoCenter. Sam leaves an astounding legacy. He dominated the new and used car business in Louisville for six decades, representing Acura, BMW, Buick, Cadillac, Chrysler, Dodge, Fiat, GMC, Honda, Infiniti, Lexus, Mitsubishi, Ram, Toyota, Volkswagen and Volvo.

His slogan, "Nobody Walks Away!" helped to make him a local legend, and he prided himself on serving all strata of Louisville drivers. He was known and respected among car retailers throughout the country, and was elected chairman of national and regional dealer councils. In 1965 and 1975, he served as president of the Greater Louisville Automobile Dealers Association, and directed the Kentucky Automobile Dealers Association from 1980 to 1984. He was the regional winner of the Time Magazine Quality Dealer Award in 1971, which honors American car dealers for exceptional performance combined with distinguished community service.

While primarily an automobile dealer, he helped better the lives of many, especially children and animals through his philanthropic efforts. He believed that giving back to the community where he made his living was not an obligation, but indeed a privilege that he willingly accepted. His emphasis on community resonated with legions of customers, colleagues, and friends. In 2004, he established the Sam Swope Family Foundation, which contributed millions to numerous causes, many in Louisville and Orlando, Florida. He provided leadership for the creation of the following: the Kentucky Humane Society Sam Swope Pet Treatment and Lifesaving Center, Sam Swope Care Center at the Masonic Homes of Kentucky, and the Sam Swope Scout Center for the Lincoln Heritage Council of the Boy Scouts of America. In 2009, the Advertising Federation of Louisville recognized Swope as the Louisvillian of the Year. In 2014, the Louisville Forum honored him with the Fleur De Lis Award, and the University of Louisville awarded him an honorary Doctorate in Public Service for his contributions to the Louisville community throughout his career.

His long and distinguished roster of civic activities included service on the Boards of University of Louisville, Norton Healthcare, Republic Bank & Trust Co., Louisville Area Chamber of Commerce, Louisville Water Company, Elizabethtown/Hardin County March of Dimes, and Kosair Charities. In 1998, Kosair Charities established the Sam Swope Leadership Award to recognize outstanding community leaders. In 2000, he was inducted as a Laureate in the Junior Achievement's Kentucky Business Hall of Fame.

Swope played as hard as he worked. He had a wonderful sense of humor and was notorious for telling a good joke. He was an avid boater, both on the Ohio River and in Florida, and a longtime motorcyclist, riding the Alps numerous times. He was still riding in the months leading up to his death. Loved ones remember him also as a world-class storyteller, giving virtuoso performances at family gatherings for hours on end.

He was preceded in death by his parents, Lytle and Dorothy Swope, of Casselberry, FL, a grandson, Gavin Winkler, and several well-loved pets.