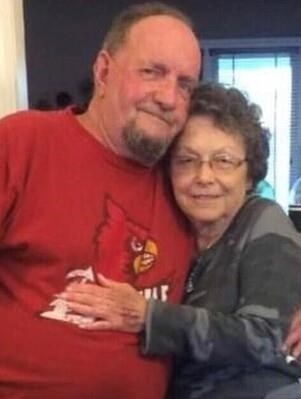 Louisville - Thomas Virgil Hatfield, Sr. and Jeanine Marie Hatfield, passed away on January 10, 2021. Thomas, age 75, was born on November 11, 1945 to his late parents, Virgil and Anna Lee Hatfield. Jeanine, age 72, was born on January 24, 1948 to her late parents, Arthur and Shirley Wright. He attended Western High School, while she was a graduate of Shawnee High School. Thomas proudly served his country in the US Navy during the Vietnam War and retired as a Union Painter. Jeanine worked and volunteered for countless charitable organizations.

Their Funeral Mass will be held at 10:00 AM on Tuesday, January 19, 2021 at St. Lawrence Catholic Church, 1925 Lewiston Dr., Shively, KY 40216. Entombment of Thomas Sr., Jeanine, and their fur child Willie, will follow at Louisville Memorial Gardens West.

Following entombment, a Celebration of Life for both will be held at Pleasure Valley Lions Club at 6000 Lions Arms Drive, Louisville, KY 40216.

In lieu of flowers during this difficult time, the family kindly ask for prayers and donations toward funeral expenses. Cash or check donations may be mailed or delivered to Owen Funeral Home labeled as "Hatfield Family Donation."

I loved them both with all my heart they were my family.
Rebecca Teel
January 20, 2021
You may not remember me I worked with Jeanine at Atherton High School and also went to Bingo with her or most of the time she worked them, as for Tom he would always leave silly comments and emojis on my Facebook page,, we kept in touch through facebook, all the years following,, I give My condolences to the Hatfield family, Jeanine and Tom will be missed so much... prayers for you all and God is with you....May they both Rest in peace..
Charlotte Spalding
January 17, 2021
You don't know me, and I didn't know Thomas or Jeanine. My heart and soul are so sorry for your loss. I will pray for peace an solace and want you to know that the community mourns with you.
Anonymous
January 15, 2021
Rest in peace Uncle Tom and Aunt Jeanine. So difficult to understand but we may find peace in knowing that you both are with the ones who left before you in Heaven with Our Lord. May those left behind find peace and solace with each other and the memories you left behind. Christy, all my prayers and love for you and your family.
Bobby Hatfield Jr
Family
January 15, 2021
Still in shock, so sorry Christy, wish I could be there with you, my heart is breaking for you and mine too. Heartbreaking all the way around for family and friends. Love you Dearly and Prayers!
Peggy Zwedoff
January 15, 2021
Showing 1 - 5 of 5 results