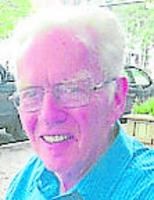 Frank was married to the late Adelaide (Hartley) Hassett with whom he shared 40 years of marriage, who passed away in 1994. Frank was currently married to Winifred (Garvey) Hassett.

Frank was the son of the late J. Frank and Alice M. (Carey) Hassett. He was born on January 25, 1932 in Worcester, MA, and grew up in Thompsonville, CT and Woburn, MA, where his father took the position of Superintendent of the Woburn schools.He graduated from Woburn High in 1949 as salutatorian of his class. He graduated from Tufts University 1953 with a bachelor's degree in Electrical Engineering, cum Laude and continued his education, earning his master's degree in Electrical Engineering from Northeastern University in 1973 and was a registered professional engineer in Massachusetts as well as both a member of IEEE and Tau Beta Pi.

From 1953 through 1973, Frank was employed with Radio Corporation of America (RCA), where he was awarded the prestigious David Sarnoff Award for Excellence in Engineering in 1968 in recognition of his facilitating the mass production of television sets. Also while at RCA, Frank was the sole engineer responsible for the logic design of the Apollo "rendezvous range tracker," a pivotal component of the Apollo missions that enabled the successful return of astronauts from the moon. Frank went on to a career in software development and software engineering management at Digital Equipment Corporation, where he managed and contributed to key operating system technologies. He was also a co-founder of BluePoint Technologies Inc., later sold to Adobe, Inc. After retirement, Frank continued his pursuit of knowledge by engaging in frequent discussions with his children on challenging topics of technology, music, arts, and politics.

A passion of Frank's was to help special needs individuals in any way he could. He was an active member of the board of directors of LifeLinks, Inc., an organization providing special needs persons with a broad scope of services, and he supported many organizations and activities directed at helping those individuals.

Along with his parents, family and many others in his community, Frank was devoted to his faithin God.From those who share his faith, Frank asks for prayers, Rosaries, and recitations of The Chaplet of Divine Mercy. Mass cards are especially desired and any Catholic church can provide details about his request. In his own words, Frank left us with: "Farewell to all that love me here, and I look forward to a reunion whenever the Lord chooses."

Although now joined with his late wife Adelaide, Frank will be missed by so many, and is survived by his wife, Winifred (Garvey) Hassett of Nashua, his children, Victoria J. Hassett, Michael F. Hassett and his wife Rita, Marianne Jewett and her husband Jonathan, Kathleen M. Wolf and her husband Thomas, Christopher R. Hassett and his wife Janet, and Gregory P. Hassett, and by six grandchildren, Gregory Wolf, Hannah Wolf, Katya Hassett, Kelly Hassett, Dylan Jewett, and Cambria Jewett. He is also survived by his brother Richard Hassett and his sister Anne Hassett.

Relatives and friends are respectfully invited to attend his Memorial Mass, Monday, May 18th at 11 am at the Immaculate Conception Church,216 E. Dunstable Rd., Nashua, NH 03062 (the date is subject to change depending on COVID-19 restrictions).Intermentat St. Joseph's Cemetery was private and at the convenience of his family.In lieu of flowers, donations in the memory of Frank Hassett should be sent to:Adelaide Hassett/Jean Connors Research Laboratory, Dana-Farber Cancer Institute, 450 Brookline Ave., Boston, MA 02215, Care of Dr. Jerome Ritz. Arrangements are by the DOLAN FUNERAL HOME, 106 MIDDLESEX ST., CHELMSFORD, MA. 978-251-4041. Condolences to his family may be made at www.dolanfuneralhome.com.

To plant trees in memory, please visit our Sympathy Store.
Published by Lowell Sun on Apr. 8, 2020.
MEMORIAL EVENTS
May
18
Memorial Mass
11:00a.m.
Immaculate Conception Church
216 E. Dunstable Rd., Nashua, NH
Funeral services provided by:
Dolan Funeral Home
MAKE A DONATION
MEMORIES & CONDOLENCES
Sponsored by lowellsun.com.
5 Entries
So many will miss dear Frank. I am sorry Winnie to learn this sadness. He was an amazing man....and will be remembered always.
Gail Bartlett
April 11, 2020
Frank was a wonderful person on many levels: a great engineer to work with, always willing to mentor and guide. A wonderful humanitarian with his work with Dana-Farber Cancer Institute. Fully committed to his faith and sharing his understanding of the purpose of life. He set a great example for a life fulfilled for friends to follow! My condolences to his family as we all share the sadness of his passing. Till we meet again my friend.
Buck Locke
April 10, 2020
Dad lives on in all of his children and grandchildren. A great father, and a brilliant man. Everyone who knew him loved and admired him. I have so many memories of his kindness and humor. I miss him so much.
Gregory Hassett
April 9, 2020
dad you were more than just a father! You were like a best friend and always there for me and Rita who really loved you so much! I know spiritually you will always be with me and be an influence in that way! I love you dad.
Mike Hassett
Son
April 8, 2020
To Michael and Rita and the entire Hassett Family, please accept our sincere sympathies at Frank's passing. May he rest in Peace.
John and Bonnie Wilder
April 8, 2020
Showing 1 - 5 of 5 results