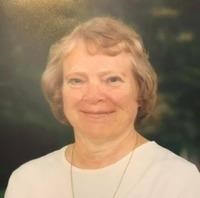 Margery "Marge or Margie" Louise Coombs Williams, 79, of Lunenburg and Groton MA died on Monday, December 9, 2019 after a battle with PSP and Vascular Dementia. She was surrounded by music, prayer, loved ones, and tender care during her final days.

Margery was born to parents Charles Edwin Coombs and Ruth Juliette Snow Coombs on February 1, 1940 in Buffalo NY. She graduated from Commerce High School in Springfield, MA in 1957 and received a B.S. in Recreation and Youth Leadership from Springfield College in 1961.

Marge discovered an early interest in music. She sang with a high school trio, learned to play the guitar, trombone, flute, piano, recorder and dulcimer. This love was passed down and music became the language of love for her entire family. She was independent and devoted to friends and family. Her strength, acceptance of others, sense of humor and passions regularly brought new people into her sphere. She loved to travel and dine out, often taking her family along for the adventure. She made sure the family, ever expanding, celebrated together often. She treasured time spent in Weston, VT with regular visits to the Weston Priory and the Weston Playhouse.

In 1994, Marge completed a twenty-year career at the Greater Lowell Family YMCA in MA, serving eleven years as Executive Director, the first woman in this position. During her career at the YMCA she received training in capital campaign fundraising. With the added experience of five years in the Advancement Office at Lawrence Academy in Groton, MA she honed her fundraising skills to take into retirement.

Her biggest impact on our world was her work in the United Church of Christ (UCC/Congregational). She participated in her husband's ministries in Brimfield, Tewksbury and Lunenburg MA, leading youth choirs, committee service, shepherding teen groups, and so much more. She continued contributing in every church she was involved with after that, and she strongly suggested her children follow suit.

During her "retirement" she dedicated herself to helping UCC churches through successful capital campaigns. Marge founded Williams Consulting Services in 1994 and worked for the MACUCC as a campaign consultant where she wrote the conferences campaign guide for capital campaigns. By 2012, she had worked with 28 churches in Massachusetts, New Hampshire and Connecticut and helped to raise a combined total of over $14 million to fund their local missions. Margery is remembered by colleagues for "her sense of humor, her passions, her ethical and creative leadership of church capital campaigns, and her deep faith." The MACUCC commented that "her ministry among our churches has had far-reaching effects."

A memorial service celebrating her life will be held in the Lunenburg Chapel of the Sawyer-Miller-Masciarelli Funeral Homes, 763 Massachusetts Ave, Lunenburg, MA on Saturday, January 4, 2020 at 11:30 am. Visiting hours will begin at 10:30 am and the family invites you to join them for a memorial luncheon following the service at Apple Hill Farm, 143 Joslin St., Leominster MA. Burial will be private.

In lieu of flowers, memorial contributions may be made in her memory to the UCC Christmas Fund (www.christmasfund.org) which cares for active and retired clergy and lay employees of the UCC.