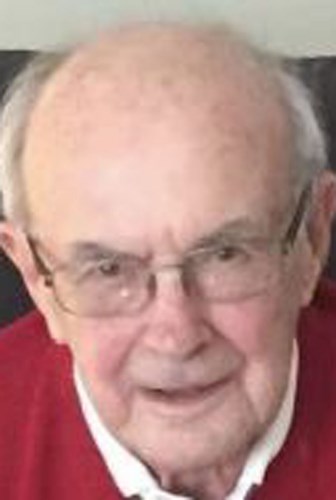 Clem was a veteran of World War II, having served for two and a half years in the Army's 643rd Tank Destroyer Battalion in France, Belgium and Germany.

He was employed by Pullman-Standard as an engineer in Michigan City, Hammond and Chicago for more than 30 years. He continued his career as a sales representative for Sloan Valve Company in Franklin Park, Illinois, until his retirement in 1998. He was a member of The American Society of Mechanical Engineers, The Skwiat Post American Legion 451, The Elks Lodge 432, and Queen of All Saints Church. He competed as a member of the Elston High School Red Devils basketball and golf teams in the early 1940s, and was a pitcher for various local fast pitch softball teams in the 1950s. He was an avid golfer, a Chicago Cubs fan, and a fan of Notre Dame football.

Mass of Christian burial will be conducted Wednesday, Oct. 20, 2021, at 10 a.m. in Queen of All Saints Catholic Church. 606 So. Woodland Ave., Michigan City, Indiana. Visitation will be Wednesday in the Queen of All Saints Legacy Center from 9 to 10 a.m. Burial will follow in Greenwood Cemetery with full military honors. Arrangements are being handled by the Ott/Haverstock Funeral Chapel, 418 Washington St., Michigan City, Indiana. (With regard to the ongoing COVID-19 concerns, we are asking all attendees to wear a protective face covering while inside the church for the entire service.)

In lieu of flowers we request that you make a donation to The Graduates of Elston High School Education Support Fund through the Unity Foundation of La Porte County (uflc.net/Elstoned) or Queen of All Saints Church, 606 So. Woodland Ave., Michigan City, IN, 46360.

Published by La Porte County Herald-Dispatch on Oct. 14, 2021.
To plant trees in memory, please visit the Sympathy Store.
MEMORIAL EVENTS
Oct
20
Visitation
9:00a.m. - 10:00a.m.
Queen of All Saints Church Legacy Center (Washington St, Michigan City)
606 So. Woodland Ave., Michigan City, IN
Oct
20
Funeral service
10:00a.m.
Queen of All Saints Catholic Church (S. Woodland Ave, Michigan City)
606 So. Woodland Ave., Michigan City, IN
Oct
20
Service
11:15a.m.
Greenwood Cemetery
153 Tilden Ave., Michigan City, IN
Funeral services provided by:
Ott/ Haverstock Funeral Chapel, Inc.
MEMORIES & CONDOLENCES
4 Entries
Jim and Jacque - Thinking about you and your family. I remember your parents. They were active lovely people. Sending good thoughts for happy memories. Peace
Marcy (Weidner) Jacobs
October 19, 2021
Remembering all the fun times we had with Clemmie and Margaret. Old friends are the best. Our sympathy to the Kniola clan
Connie and Phil Cross
Friend
October 19, 2021
I have many fond memories of Clem. In high school I would often find myself at the Kniola residence seeing my good friend Larry. After being offered an apple by Margaret :) I'd pop down to the den/family room and always be greeted by Clem with a robust smile, hearty handshake and great conversation. Heartfelt wishes to all the Kniola's and extended family.
Scott Dunlop
Friend
October 18, 2021
Thoughts and prayers to your family.
Dan & Mary Garrison
October 17, 2021
Showing 1 - 4 of 4 results