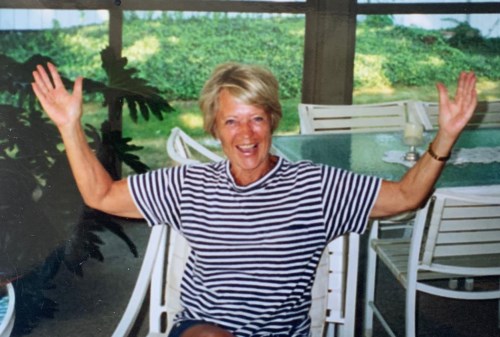 She was greatly loved and will be sorely missed by her three sons, Erik Kittlaus, Dag Kittlaus (Leslie), and Aaron Markle (Amanda); her five grandchildren, Markus, Kaia, Henrik, Nash and Tessa; her sister, Diddi, and brother-in–law, Dag; and her nephews, Lars, Jo and Atle.

Services are postponed until further notice as a result of COVID restrictions on her family's travel from Norway. There will be a celebration in her honor, likely in the spring.

Anyone wanting updates as to when the celebration will be hosted please email Aaron at [email protected] Any donations in Liv's name should be directed to Ski for Light at SFL.org.

Liv was born in Oslo, Norway, and held her Norwegian pride close to the heart throughout her life. As a teen she was an award-winning track and field athlete, which extended into a lifetime of athletics involving tennis, golf and cross-county skiing.

In her early 20s, Liv began working in Paris, where she met Karl Kittlaus, an American Air Force serviceman stationed in France. Ever the adventurer, she followed her heart and moved to St. Louis, where she and Karl started their family with Erik and Dag.

A decade later in the south suburbs of Chicago, Liv met and married Dave Markle, and together they had son Aaron. Soon after, they relocated to the beach community of Duneland Beach, Indiana, where the whole family enjoyed the outdoors: sailing, swimming, tennis and frequent family trips to Michigan and Wisconsin (skiing, canoeing and camping).

Liv's reach in the community was deep. She held multiple real estate licenses in three states, and spent nearly four decades as a top agent in NW Indiana. Additionally, she served on the board of the Michigan City Chamber of Commerce, and prepared and delivered food for Meals on Wheels. In her spare time at home she knit hats, scarves and pillows for the less fortunate.

Keeping to her roots, Liv became a member of Sons of Norway, which led her to Ski for Light (an organization that assists guiding the blind in cross-country skiing). Once Liv became a volunteer and member of SFL (in 1980), she instantly became an integral part, and SFL became one of her great passions. She was the life of the party, hosting yearly fundraisers in her home, which earned her the organization's Brit Peterson Award.

As a mother, grandmother and friend, Liv was best-in-class. She was adored for her warmth and giving ways. She loved to host dinner parties on her porch, visit family in Norway, spend time with her kids, play on the floor with her grandkids, bake legendary chocolate-chip cookies, play bridge with friends, dance and complete the daily crosswords/sudoku.

Liv lived an extraordinary life full of kindness and love, which will forever reach deeply into all our hearts. She is already sorely missed. Her passion for life and love was unconditional.

Memories of her will live with us through stories over lifetimes and her unforgettable loving laughter will forever ring in our minds as her spirit will be felt in passing winds.

We all deeply miss you!

Published by La Porte County Herald-Dispatch on Oct. 12, 2021.
To plant trees in memory, please visit the Sympathy Store.
MEMORIAL EVENTS
To offer your sympathy during this difficult time, you can now have memorial trees planted in a National Forest in memory of your loved one.
Funeral services provided by:
Geisen-Carlisle Funeral & Cremation Services - Michigan City
MEMORIES & CONDOLENCES
0 Entries
Be the first to post a memory or condolences.