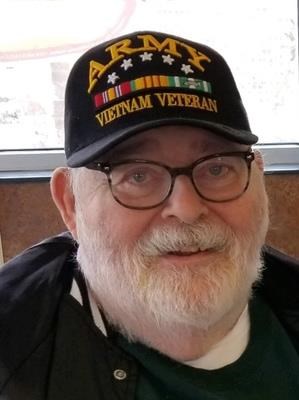 Lansing - Art passed away peacefully on April 13, 2020 at age 77 after battling many health issues. He was born in Eaton Rapids, Michigan on April 4, 1943 to Oliver Kowalk and Lillian (Lawrence) Kowalk. He attended Grand Ledge High School and served in the U.S. Army with tours in Vietnam from 1961-1963. He attended LCC on a G.I. bill and earned a computer science degree. Art worked for Auto-Owners Insurance Company for over 40 years, starting in the mailroom in 1964 and retiring as an Assistant Vice President in 2005. A-O was his second family! Arthur was preceded in death by his parents and his first wife and the mother of his children, Ann Marie (Stuckenberg) Kowalk; and his stepdaughter, Emily (Boortz) Green.

Art was an antique car enthusiast and member of the Capitol City Old Car Club; he played fast-pitch and slow-pitch softball; he loved coaching youth football and women's softball teams; and worked hundreds of IHM & Lansing Catholic BINGOs back in the day! He enjoyed golfing with Steve, Julian, Frank and good friend Lois Scarane; he built a '57 Chevy with his buddy Art Cogswell; and traveled extensively with Barb after he retired.

Art was a proud veteran, who had a tough exterior but a heart of gold. Special thanks to the caring staff at Fresenius (dialysis), Sparrow Hospital, and Ingham County Medical Care Facility (Dobie Rd.). Art will be laid to rest at Evergreen Cemetery, arrangements through Estes-Leadley Greater Lansing Chapel. A memorial service will be planned for a later date due to the current restrictions on large gatherings. In lieu of flowers, please consider a donation in Art's name to the Boys & Girls Club of Lansing or the Old Newsboys Association.

Published by Lansing State Journal from Apr. 14 to Apr. 19, 2020.
To plant trees in memory, please visit the Sympathy Store.
MEMORIAL EVENTS
To offer your sympathy during this difficult time, you can now have memorial trees planted in a National Forest in memory of your loved one.
Funeral services provided by:
Estes-Leadley Funeral Home
MAKE A DONATION
MEMORIES & CONDOLENCES
Sponsored by Estes-Leadley Funeral Home.
16 Entries
Barb and family... my sympathies hearing this news. I was a part of the AO team and worked for Art for several years. We spent many a lunch hour discussing life and current events. I'm grateful for time with him and enjoyed running into both of you occasionally when you were out and about on drives. Thoughts and prayers for you all...
Keith Axtell
Coworker
May 9, 2020
Barb:
I was so sorry to hear of Art's passing. My thoughts and prayers are with you and family during this very difficult time.
Cherie Beck
April 21, 2020
Love and hugs to you all during this difficult time. Arthur was blessed to have you all taking such good care of him. I hope your love and beautiful memories outlast the pain of grief.
Julie Bird
April 20, 2020
Barb, We are very sorry for your loss! Keeping you in our thoughts and prayers during this difficult time.
Amanda Frederick
April 16, 2020
Barb, I am so sorry about Art's passing, and thinking of you.
Amy Timmer
April 16, 2020
Jackie and family so sorry to hear about Arts passing. Prayers are with you and your family.
Ken & Cathy Kowalk
April 16, 2020
Sandy and family,
So very sorry to hear of Art's passing. May you feel the support of many and feel comfort in knowing your dad's rich life, including his strong work ethic, his many interests, and his love for you and his family.

Sandy and Ed Liddle
April 16, 2020
I knew Art as a fine and dedicated associate of A-O and as a member of the A-O fast pitch softball team.
Art made many improvements in his area of work during his many years with the company, but I got to know him much better when we were playing softball. I will miss Art.
We pray for you and family during these difficult times and especially for your recovery from the virus
Dick Otto
April 16, 2020
Thinking of you and your family, Sandra. Praying that you are comforted during this difficult time. Your dad was such a great person and I am glad to have known him. Hugs and kisses to you and as always keeping you in my prayers.
Lakecia Powell-Denson
Friend
April 15, 2020
So sorry for your loss. We are thinking of you and yours at this difficult time.
Susan and James Oliver
April 15, 2020
Sincere condolence to Barb and family with the passing of Art. I worked with Art for most of the 40 years he worked at Auto-Owners. He was passionate about everything he poured his heart into. Truly, Auto-Owners was his second family. He will be missed by his retired friends and many associates still working at Auto-Owners.
Ronald & Mary Simon
April 15, 2020
So sorry for your loss. We are sending love and prayers of comfort for the family, Bob and Kathy
Kathy Fleming
April 15, 2020
Thinking of you and your family, Barb, and sending you my love and prayers for strength at this time of struggle and pain~ Terry Carella
April 15, 2020
Barb, Linda and I are sorry to hear of Arts passing you have always been in our prayers and will remain so.
Douglas & Linda Fulk
April 15, 2020
Barb, Sandra and family: I had the honor of seeing the heart of Art revealed at activities in support of the Boys and Girls Club of Lansing. The children of Lansing are better off because Art Kowalk lived.
My love and prayers to you. Richard and Claudia
April 15, 2020
Barb , Sandra ,and Rob.. as well as the rest of the family. I'm sorry to hear about the loss of Arthur.. He will be strongly missed.. So many great memories with him. May the Lord keep this family strong during this time and always.. RIP Arthur you definitely deserve it.. ..
Lawrence Thompson
April 14, 2020
Showing 1 - 16 of 16 results