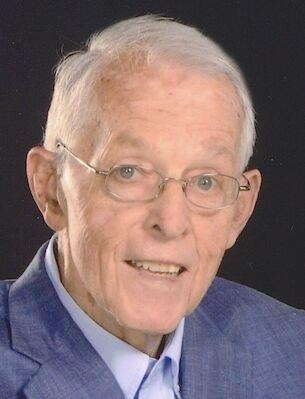 Bob Stragier passed away July 17, 2021 after a lengthy illness - the world has lost a very special man. He was born Charles Robert Stragier in Lansing, Michigan, on January 18, 1936, but he was known as Bob his entire life. Bob was preceded in death by his parents, Charles and Jane Stragier; infant brother, William Paul Stragier; and stepfather, Paul Beach.

Bob attended Eastern High School from 1951-1953. While at Eastern High School, he earned seven Varsity letters and was captain of the Varsity baseball team for two years. In 2016, he was inducted into the Lansing Eastern High School Athletic Hall of Fame, an honor which meant a great deal to him. After graduating from Lansing Eastern, Bob attended Michigan State College. In 1954, he left MSC when he signed a professional baseball contract as a left-handed pitcher with the Milwaukee Braves (now Atlanta Braves). Unfortunately, his baseball career ended abruptly when he injured his shoulder. Following his baseball career, Bob returned to Lansing and played basketball for ten years in the city league, winning several State championships. In 2018, he was inducted into the Greater Lansing Area Sports Hall of Fame, another honor of which he was very proud. After his baseball career, Bob was employed by the Lansing Board of Water and Light for ten years. Eventually his career switched to education sales. Bob retired from MPI (Michigan Products, Incorporated) after 41 years as Executive Vice-President and Sales Manager. Bob was member of the South Lansing Rotary for many years and served as President 1983-84. He was also named a Paul Harris Fellow by the Rotary Foundation of Rotary International. Bob genuinely loved people (especially children) and considered anyone he met a friend. He developed lasting friendships with people he met through work, travel, and in the many communities he and Gloria lived throughout their marriage. Bob loved to talk about his many life experiences and his friends often heard his favorite stories many times. He also loved to tell children stories and even accompanied his granddaughter to kindergarten on one occasion to read her favorite "big" book to her class. Bob and Gloria were fortunate to be able to travel throughout the United States and visit many countries after retirement. During his long illness, Bob enjoyed looking at their many travel albums and reminiscing about all the things they saw and the people they met. He especially liked to point out to visitors a map of the world on his wall with red pins marking all the places he had visited. Bob was a man of faith and attended Presbyterian churches in Lansing and Holt before joining the St. Luke Lutheran Church of Haslett.

Special thanks to all Bob's "family" at Robinwood Landing Alzheimer's Special Care Center and to Hospice for their compassionate care.

The funeral service will be held at 11:00 a.m. Thursday, July 22, 2021, at St. Luke Lutheran Church, 5589 Van Atta Rd., Haslett, with interment to follow in Evergreen Cemetery. His family will receive friends at the Estes-Leadley Greater Lansing Chapel from 4:00 - 7:00 p.m. Wednesday. In lieu of flowers, memorial contributions may be made to St. Luke Lutheran Church or 2021 Walk to End Alzheimer's in memory of Charles Robert Stragier. We also ask everyone to consider doing a random "act of kindness" in memory of Bob.

To plant trees in memory, please visit our Sympathy Store.
Published by Lansing State Journal from Jul. 19 to Jul. 20, 2021.
MEMORIAL EVENTS
Jul
21
Visitation
4:00p.m. - 7:00p.m.
Estes-Leadley Greater Lansing Chapel
, MI
Jul
22
Funeral service
11:00a.m.
St. Luke Lutheran Church
5589 Van Atta Rd., Haslett, MI
Funeral services provided by:
Estes-Leadley Funeral Home
MAKE A DONATION
MEMORIES & CONDOLENCES
Sponsored by Estes-Leadley Funeral Home.
5 Entries
Hi Gloria, Sue and I were very sorry to here of Bob's passing. We were privileged to know him and enjoy all the fun times with you guys at Tuscany Lake in Venice Florida. We will remember him fondly and all his stories we laughed at over and over again. What a wonderful special man Love always Al and Sue your Canadian friends xo
Al and Sue Wood
Friend
July 24, 2021
Gloria, I am so sorry to hear of Bob's passing. Ive seen you with Bob during my visits at Robinwood. He was a well loved resident. I feel fortunate to have known Bob and thankful that his memory will live on through stories I so often hear. Your family remains in my prayers.
Vicki Harrell
July 23, 2021
It was a great pleasure to care for Bob while he resided at Robinwood Landing. It was a blessing to me to hear multiple stories about his life especially the ones about baseball and his time as a professional pitcher. And his interaction with Hank Aaron as a rookie and Ted Williams during spring training. Bob was a special man. I feel privileged to have spent time with him. God Bless.
Greg Smith
Work
July 22, 2021
Dear Gloria, We are sorry for your loss of Bob. Gloria you are a wonderful woman and a devoted wife. We are part of the Robinwood family and Mom loved spending time with you. Although your loss is great, Bob is happy in heaven swinging his bat at the ballpark. what a good guy.
Valerie and Vivian Klasko
Other
July 21, 2021
To the Stragier Family . . So sorry to read of the passing of Bob. It's sounds like he lived a complete & fulfilled life and obviously is going to be missed. Always remember the fun & happy times you shared w/ him. Mike & Terri Bortz (in Florida) Pass along my email to Steve . . . [email protected]
Mike Bortz
Other
July 20, 2021
Showing 1 - 5 of 5 results