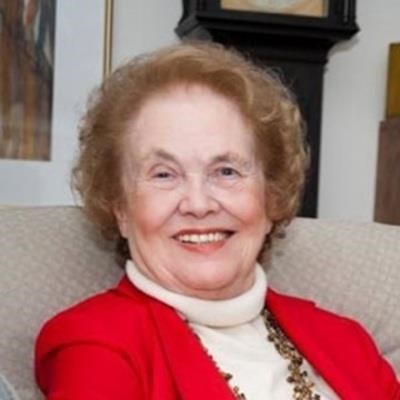 Lansing - Gladys Eloise Beckwith, PhD, one of the strongest and most tenacious women most people had ever met, lost her life to Covid-19 on December 8th. It turns out the only battle Gladys couldn't win was with a virus that could have been stopped months ago if her fellow Americans had chosen to believe in science and acted on behalf of humanity.

Gladys was born in 1929, the year of the Great Crash and the start of the Depression, in Flint, Michigan to Arthur Roy May and Ina L. (Mason) May. Like most families during the Depression, the May family lived frugally. Never one to let adversity get her down, Gladys told a story that as a kid trick or treating, one neighbor would offer the kids a bite of a pickle. The kids would line up and take a bite and were perfectly content with their treat. Perhaps her persistence, strong work ethic, and compassion for others came from growing up in tough times.

Gladys greatly valued education, a theme throughout her life, and graduated from Flint Central High School in 1947 and Flint Junior College (Mott Community College) in 1949. She earned a BA in English in 1951, a MA in English and Education in 1956, and a PhD in Teacher Education in 1968, all from Michigan State University. Gladys educated thousands of students throughout her career. She taught at the elementary and secondary levels in public schools in Maine, Texas, and Michigan during the 1950s. She then taught at the university level at Baylor University in Texas before moving to Michigan State University in 1965 where she stayed until her retirement in 1999.

It was while teaching in the Department of American Thought and Language at MSU that she began to create courses focused on women, women writers, and women's history. Dr. Beckwith and a handful of her colleagues then created the Women's Studies program at MSU in 1973, one of the early women's studies programs in the country. In fact, that same year Gladys and one of her classes were featured in a US News and World Report article about the newly emerging field of women's studies. Looking back at the creation of these classes, Gladys once said "what women's studies said was…there is a woman's way of looking at the world and women have contributed and they have shaped society, and we need to know just in what ways women have shaped it."

Gladys' spent her life searching for how women shaped the world, and in the process, shaped it herself. Along with some MSU colleagues, Dr. Beckwith created the Michigan Women's Studies Association (MWSA) in 1973 to include community members in the movement and to encourage women's studies and feminist thought on academic campuses throughout the state. The idea of an association dedicated to discovering the lost and long-forgotten history of women was so new that MWSA predates the National Women's Studies Association. Gladys served as the first president of the association, a post she would hold, with only a short intermission, until 2010.

Gladys began to dream at this early stage of a place where the newly discovered information could be presented to the public. She also envisioned this place as a community meeting point where feminist ideas could flourish and be shared. Their goal was to influence education and enrich the curriculum of public schools and colleges with the inclusion of information about women. Dr. Beckwith and Lansing City Councilwoman Lucile Belen negotiated with the City of Lansing a $1/year lease on the Cooley Haze House in downtown Lansing. This beautiful historic home was once the governors' residence but had fallen into disrepair and was scheduled to be demolished to make room for a parking lot. The city required MWSA to pay for the $250,000 renovation. It was a huge fundraising task - the association had $1200 to its name. It took several years, but this became the Michigan Women's Historical Center and Hall of Fame. This facility finally opened on June 10, 1987, the anniversary of the date in 1919 when Michigan ratified the 19th amendment giving women the right to vote. It was a glorious day for members of MWSA, but it was especially meaningful to Gladys Beckwith who was the driving force behind its creation.

Dr. Beckwith also served as the Executive Director of the Michigan Women's Historical Center and Hall of Fame. This position required not only an extensive knowledge of women's studies and various women's issues, but an ability to constantly be raising enough funds to keep the non-profit going. During those years, Gladys could be found most days, including weekends and numerous evenings, at the Center leading tours, talking to various groups, or working on the next of seemingly endless projects the small staff preformed. She traveled throughout the state speaking about women's history and the Center. Gladys served in the position of Executive Director from 1987 until her retirement in 2008. Perhaps the most remarkable part of this is that Gladys did it all without pay.

Never one to sit still or feel she had done enough, Gladys served as a trustee on the Lansing School District Board of Education for 18 years. In many ways, she felt this was the most important work she did. She knew that when you reached kids, you could make a true difference in them and the world. She often encouraged others, especially women, to serve on their local school boards. Gladys also served many years on the State Board for Public Community Colleges.

Gladys Beckwith was always a community leader and deeply involved in various community and women's groups. She was a member of the Advisory Committee on Education for the Michigan Women's Commission, was active in the local and state Democratic party and in the ACLU, and was an active member of AAUW, BPW, and Zonta.

Gladys was a committed activist on behalf of women for most of her adult life. She was one of several women who refused to be denied seating in a male only dining room in a Lansing restaurant (the restaurant later closed rather than open its whole facility to women). She was actively involved in winning reproductive rights for women. One of her greatest stories is of being physically tossed out of a post office for gathering signatures in support of legal access to abortion. She mentored countless younger women, encouraging and guiding them through academic, professional, and personal decisions. Teaching and interacting with young people may truly have been Dr. Beckwith's first love. She was always excited to hear about what was happening on campuses and sharing ideas with students.

Gladys was a true animal lover who supported and adopted pets from local shelters. She leaves behind her sweet Yorkie named Yoda and two cats. She loved all animals - including the raccoon that she live-trapped and drove to the forest to release. She said he was a perfect gentleman as he rode through town in her back seat. She even forgave her beloved beagle Miranda for eating students' papers.

Gladys was many things to many people - a loving wife and mother, a dreamer, a doer, a lifelong friend, a mentor, a cancer survivor, that lady who saved the big yellow house on Main Street, a trailblazer, a teacher, a colleague, an inspiration, and a hero. She saw the best in everyone and helped those in need. She won many awards including being named a 2004 Michiganian of the Year by The Detroit News, The Liz Kummer Award from the Michigan AAUW, the Harriet Tubman Award from the Detroit NOW, the Presidential Award for Outstanding Community Service from Michigan State University, and she was inducted into the Michigan Women's Hall of Fame in 2012.

Gladys was preceded in death by her parents and by her husband Dr. Gerald Beckwith who shared her dreams. Gerald was by Gladys' side encouraging her every step of the way as she strove to right the gender imbalance in society, academia, and history. She is survived by her daughter, Christine Farrow of Washington State, her cousin Delores Perry of Grand Blanc, and many dear friends including Tamara Shabluk, Pam Withrow, and Tess Pido.

Gladys has been cremated and her ashes will be interred alongside her husband at a later time.

Donations in Gladys' memory may be made to the Ingham County Animal Shelter, the Capital Area Humane Society, the National Organization for Women, or a charity of your choice. Arrangements by Estes-Leadley Greater Lansing Chapel. www.estesleadley.com


Published by Lansing State Journal from Dec. 11 to Dec. 13, 2020.
To plant trees in memory, please visit the Sympathy Store.
MEMORIAL EVENTS
To offer your sympathy during this difficult time, you can now have memorial trees planted in a National Forest in memory of your loved one.
Funeral services provided by:
Estes-Leadley Funeral Home
MAKE A DONATION
Please consider a donation as requested by the family.
MEMORIES & CONDOLENCES
Sponsored by Estes-Leadley Funeral Home.
5 Entries
Gladys and I joined Michigan State University's Department of American Thought and Language in Fall 1965. I got to know her well after another department member and Director of MSU's Women's Studies Program, Joyce Ruddell Ladenson, recruited me to teach in the program. For almost a decade, until I retired, Gladys supported my work, in addition to all her well-known local, state, and national efforts in support of women's rights. As the lone male in the Program, I have long been grateful for her support. Notable is that Gladys and I created "Men in America," to parallel our department's "Women in America" course. We each taught it for the first time in the twentieth anniversary year of MSU's Women's Studies Program. Finally, in addition to her myriad efforts on behalf of women, it should be noted that Gladys was a moving force in the effort to unionize MSU's faculty. Gladys Beckwith combined a warm and generous personality with hard-nosed realism in pursuit of the rights of all women, children, and men.
Bruce Curtis
October 21, 2021
I was sorry to just hear about Gladys. She was a real force of nature and a true friend to my cousin Louise Sause. It was an honor to know her.
Der DeebWacksman
Friend
April 19, 2021
I was not fortunate enough to know Gladys but I can vouch that she helped craft one truly amazing daughter!!! and that is life's most important accomplishment isn't it...
Kent Kwiatt
February 23, 2021
Wow! What a wonder productive life this talented and energetic woman lived. Her footprints will be hard to fill as she leaves a huge legacy of service and accomplishments.. and leaving Lansing a better place for women and children. Thank you for this wonderful tribute to this great woman. Heaven's gain for sure!!
Ricci Misener Eschtruth
Acquaintance
December 15, 2020
I never met the lady but after reading her obituary I just had to comment. What she accomplished certainly wasn’t easy considering the times she lived through. What a well lived life!
Sandra Hudson
December 12, 2020
Showing 1 - 5 of 5 results