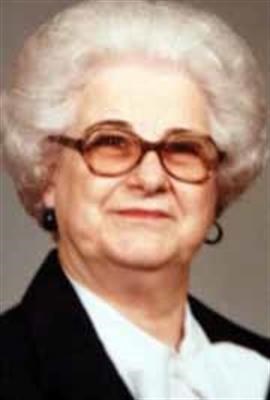 FUNERAL HOME
Abell Funeral Home & Flower Shop - Abernathy
411 16th Street
Abernathy, TX
Alice Stapleton Richter ABERNATHY-Alice Stapleton Richter, our beloved wife, mother, grandmother, great-grandmother and teacher passed away on Oct. 15, 2015, at the age of 99. Alice was born on Aug. 7, 1916, in Abernathy, Texas, to Gid Sr. and Nellie Adkisson. Along with her five siblings, she was raised on the family farm outside of Abernathy, and graduated from Abernathy High School and Texas Tech. Alice taught school in Abernathy for one year, before moving to Petersburg to teach. There, she met Steve Stapleton, whom she married in 1941. She and Steve enjoyed 52 years together, raising their two daughters and enriching the Petersburg community. Alice taught school in Petersburg for 26 years. She was honored to be named Educator of the Year, and had a positive impact on the lives of many, many students. In 1994 she married Hugo Richter, a former classmate from Abernathy, and moved to his home in Aubrey, Texas. Alice and Hugo shared a love of travel and were able to visit many countries together. They traveled all over the state of Texas with the Dallas/Fort Worth Model T Ford Club of America. Alice maintained her light hearted personality, wit, and love for family throughout her life. She was a member of Pilot Point First Methodist Church. Alice is survived by her husband, Hugo Richter of Sanger, Texas; two daughters, Jeanne Thompson (Harry) of Possum Kingdom Lake, Texas, and Jodi Case of Albuquerque, N.M.; four grandchildren, Brian Thompson of Plano, TX, Courtney Thompson of Possum Kingdom Lake, Texas, Chris Case of South Salem, N.Y., and Kelli Medina of Phoenix, Ariz.; five great-grandchildren; numerous nieces and nephews, and many friends. The family will gather to receive friends Monday, Oct. 19, from 6 to 7:30 p.m. at Abell Funeral Home. Graveside services will be held at 11 a.m., Tuesday, Oct. 20, in the Petersburg Cemetery under the direction of Abell Funeral Home & Flower Shop of Abernathy, Texas. The family suggests memorials to the First United Methodist Church, 1706 Ave. G, Petersburg, TX 79250 or Pilot Point First United Methodist Church, P.O. Box 492, Pilot Point, TX 76258.

Published by Lubbock Avalanche-Journal on Oct. 18, 2015.
To plant trees in memory, please visit our Sympathy Store.
MEMORIAL EVENTS
To offer your sympathy during this difficult time, you can now have memorial trees planted in a National Forest in memory of your loved one.
Funeral services provided by:
Abell Funeral Home & Flower Shop - Abernathy
MAKE A DONATION
MEMORIES & CONDOLENCES
0 Entries
Be the first to post a memory or condolences.