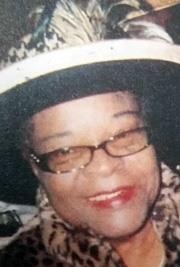 FUNERAL HOME
Griffin Mortuary
1715 E Broadway
Lubbock, TX
Dessie Lee (Hunt) White LUBBOCK-Dessie Lee (Hunt) White, 83, passed away on Nov. 8, 2014. Dessie was born on Oct. 1, 1931, to the parentage of John and Alice Hunt in Milam County, Texas. Dessie was reared with strong family values. She attended school in Rosebud, Texas. Dessie met and married, Roscoe S. Judie Sr. on June 20, 1949; to this union six children were born. Dessie earned her G.E.D. and eventually started a career with Texas Tech University from which she retired. She was a member and participated in the choir of Community Baptist Church under the pastoral leadership of Larry Brooks until her health began to fail. Dessie was a caring and loving individual that will be missed by many. She was preceded in death by her parents, John and Alice Hunt; sister, Mattie Thompson; brother, Hosea Hunt; sons, Roscoe and Leslie Judie. She leaves to cherish her memories: daughters, Frances Shephard (McKinley-deceased) and Marilyn Blackman; sons, Frank Judie, Samuel Judie, Lemuel Judie (Della) and Carl L. Judie (Sharon); sisters, Ida Hamilton and Alice Pittman; brothers, James Hunt Sr. and Coy Dell Porter (Linda); 13 grandchildren; 18 great-grandchildren; and a host of nieces, nephews, other relatives and friends. Celebration of life services will be held at 11 a.m. on Saturday, Nov. 15, 2014, at Community Baptist Church. Interment will follow in the City of Lubbock Cemetery under the direction of Griffin Mortuary. Visitation will be held today, from 1 to 6 p.m., followed by wake service from 6 to 7 p.m. at Griffin Mortuary.

Published by Lubbock Avalanche-Journal on Nov. 14, 2014.
To plant trees in memory, please visit the Sympathy Store.
MEMORIAL EVENTS
To offer your sympathy during this difficult time, you can now have memorial trees planted in a National Forest in memory of your loved one.
Funeral services provided by:
Griffin Mortuary
MAKE A DONATION
MEMORIES & CONDOLENCES
1 Entry
our prayers are with the family the lord make no mistakes he has once again pick a beautiful flower from his earthly garden
angie ross eddington
November 14, 2014
Showing 1 - 1 of 1 results