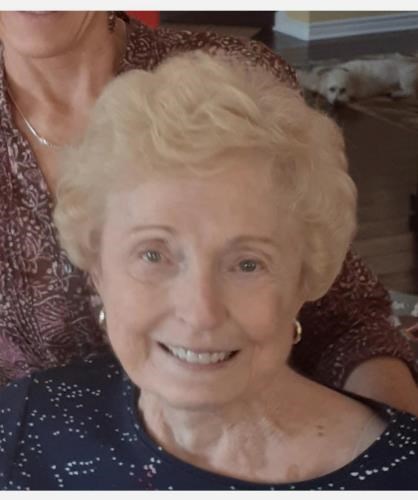 BORN
1935
DIED
2020
ABOUT
Las Vegas High School
Charlotte Mugleston Kelly, 85, peacefully passed away October 15, 2020 at home in Las Vegas with family by her side. She is survived by her children Matthew, Laurie (Marty) and Patrick (Gina), her daughter-in-law, Barbara and grandsons Matthew and Jacob. Charlotte was born July 18, 1935 in Salt Lake City, UT to Richard (Tex) Mugleston and Laurie Mae Walker Mugleston. The family moved to Las Vegas in November of 1937 when her father accepted a position with Clark County Wholesale and Mercantile. Charlotte and her sister Patricia lost their mother in 1947 at the tender age of 11 and 12. Charlotte attended the 5th street grammar school and graduated from Las Vegas High School in 1954. While in high school Charlotte was a Rythymette, a troupe that fashioned itself after the Rockettes. They performed all over the western United States and at many local parades and school functions. She always believed that being a Rythymette helped put her on a life path of discipline which also gave her the drive to always be her best self. While in high school she also worked part time as a draftsman at Cambell Realty where she continued on after high school. In 1955 she converted to Catholicism and married the love of her life, Allan Kelly. They started their family with the birth of their first son, Matthew in 1958, raising all the children within the Christian faith. In 1960, Allan and Charlotte realized their dream of being small business owners and opened their first liquor store and beer bar, Kelly's Liquors, next door to the Moulin Rouge. In 1965 they opened another tavern, The Traphouse, named for Allan's love of the sport of trapshooting. In 1992 Their third location opened as Kelly's Kasino. Always the lady, Charlotte never felt comfortable in taverns, so Allan was the face of the businesses while Charlotte handled the bookkeeping at home. She was a true homemaker, raising her children in that idyllic 60's fashion. Charlotte was an amazing woman, handling her business responsibilities, raising their children and teaching them through example, the ways in which they should grow while always having time to help and enjoy family and friends. Once the kids were grown, she and Allan bought an RV and travelled every summer throughout the northwest United States, attending trapshoots and visiting family and friends. They also took many US regional tours, various cruises and enjoyed visiting Allan's family in Scotland. Allan and Charlotte were married 56 years until his passing in April of 2012. Charlotte's beautiful legacy will shine on in the lives of her children and grandchildren and her sweet memory will keep us until we see her beautiful face again in heaven. We thank you, Mom, for raising us with Christian values and doing so with quiet grace, wisdom and strength. Because of you, our lives are beautiful. Services will be private.
Published by Las Vegas Review-Journal from Oct. 20 to Oct. 21, 2020.
To plant trees in memory, please visit the Sympathy Store.
MEMORIAL EVENTS
To offer your sympathy during this difficult time, you can now have memorial trees planted in a National Forest in memory of your loved one.
MAKE A DONATION
MEMORIES & CONDOLENCES
3 Entries
I am so sorry to hear about Charlotte passing away. She was one of my favorite and most loyal customers where I did her hair in the beauty salon from late 1970 till 2003. She was a friend for many years after that.
I will miss our conversation once a year in July at our birthday time.
I will always fondly remember that sweet lady.
Darlene Morby Poole
Friend
November 13, 2020
In loving memory of a wonderful person. We will love you and miss you always.
Joseph Bustos
Friend
October 24, 2020
i remember the Rhymettes which Charlotte was a part of, they were wonderful , a credit to Las Vegas High and its students.RIP Charlotte.
Classmate
October 24, 2020
Showing 1 - 3 of 3 results