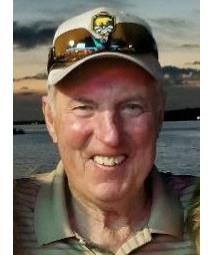 Born September 26, 1938 to Delmar and Maxine Burton, "Danny" grew up in Tulsa, Oklahoma, graduating from Webster high school. Dan played freshman football for the University of Oklahoma and graduated from the University of Tulsa. He then joined the Marine Corps and embarked on his military and commercial aviation career.

Later Dan joined American Trans Air and concluded his career operating an around-the-world trip in 1998. He and wife, Michele, settled in Las Vegas in 1987 where they enjoyed a lengthy retirement.

Dan is survived by his wife of over 32 years, Michele; sons, Rhett and Josh; granddaughter, Halee and grandson, Derek; brothers: Delmar Burton and Kenneth Gray.

Donations may be made to Toys for Tots or Best Friends Animal Society.

No services scheduled.
Published by Las Vegas Review-Journal on Jul. 25, 2021.
To plant trees in memory, please visit the Sympathy Store.
MEMORIAL EVENTS
To offer your sympathy during this difficult time, you can now have memorial trees planted in a National Forest in memory of your loved one.
MAKE A DONATION
MEMORIES & CONDOLENCES
6 Entries
As a fellow Braniff Intl survivor, Fly High and touch the face of God.
Helen Tacón
Work
July 27, 2021
Through Braniff and Golf, We came to know, and could never forget such a 'Class Guy'. Unfortunately, our paths diverged but He was never forgotten!
Rick & Lynn Matthews
Friend
July 27, 2021
He was one of the " good guys" A awesome pilot, Loyal to the folks he worked with, but mostly , a good friend. He will be truly missed to all who knew him. Rest In Peace my friend. Say Hi to Idy and Bubba for me
Edmond Smith
Work
July 26, 2021
sad day for all, rode a few miles in jumpseat tith him,My best to you and family
Sandy Sanderson,. florida
Work
July 25, 2021
With sympathy and prayers for Danny's Family. Dan Burton a good and honest friend.
Dean Dorothy
Friend
July 25, 2021
My deepest condolences for your loss. Prayers to you and family. May you always smile and have fond memories of your time together.
Anita Cardenas
Work
July 25, 2021
Showing 1 - 6 of 6 results