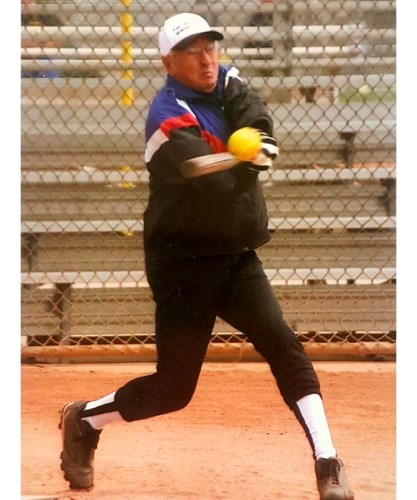 For Don's last at-bat, he had to face a "closer" with a nasty reputation. Everyone watching knew that the "closer" would be trouble. The crowd's fears were confirmed when he finished his last warmup pitch and turned his back to the crowd. And there it was, on the back of the pitcher's jersey, his last name: Alzheimer. Alzheimer's pitching repertoire included splitters, changeups, sliders, screwballs, backdoor curves, and things we've never seen before. And that final pitch? Well, it painted the outside corner of the plate. Not one to take a third strike looking, Don went down swinging in his final at-bat on June 18, 2021, at 86 years young. Don's struggles with Alzheimer's disease were finally over.

Don worked hard all his life to provide the best he could for his family, and he delivered. He was a great dad and granddad. He is survived by his sons Chuck (and Carol) and Ken (and Marilyn) and their families. He was especially proud of his four grandchildren--Alexandra (and Alexander), Anthony, Madi, and Joshua--and loved them very much. He was preceded in death by his sister Janice and brother Earl. The families send their appreciation to the staff members at The Fountains, The Commons, and Hope West in Grand Junction, CO. In addition, the families also appreciate those who stuck with him to the end, especially Lou Wodrich, Gerald Unruh, and Richard and Marti Hafen.
Published by Las Vegas Review-Journal on Jul. 22, 2021.
To plant trees in memory, please visit the Sympathy Store.
MEMORIAL EVENTS
To offer your sympathy during this difficult time, you can now have memorial trees planted in a National Forest in memory of your loved one.
Funeral services provided by:
Brown's Cremation & Funeral Service Inc
MAKE A DONATION
MEMORIES & CONDOLENCES
Sponsored by Brown's Cremation & Funeral Service Inc.
2 Entries
I played softball for several years with Don at Lorenzi Park in Las Vegas. Even in his late 70's and early 80's, Don was a very good hitter. I was playing center field one day and and Don came up to the plate. Lou kept telling me to back up. I took a couple of steps back and Don hit one over my head that rolled to the fence. Don was a great player and a better team mate.
Bill Patton
Friend
July 24, 2021
A great friend for many years who is greatly missed
Lou Wodrich
Friend
July 22, 2021
Showing 1 - 2 of 2 results