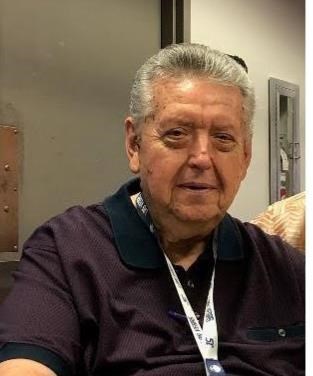 BORN
1939
DIED
2021
Nicholas W. "Fitz" Fitzenreider, 81, died on Friday, July 2nd, 2021. Born in St. Louis, MO, on July 14, 1939, he was the son of the late Charles Fitzenreider, Sr. and Ada Fitzenreider. Fitz graduated from Cleveland High School in South St. Louis and later received an associate degree. He served in the US Army and achieved the rank of Specialist 3rd Class E-4. Fitz was commissioned on the St. Louis Police force on February 27, 1961 and retired at the rank of Lieutenant Watch Commander on March 5, 1988 after receiving many commendations.

Fitz then moved to Las Vegas and started with security at the Las Vegas Convention and Visitors Authority in 1988 and then spent over 30 years as Vice President of Security/Operations for the Las Vegas Stars, 51s, and Aviators professional baseball team.

He is survived by his sister-in-law, Mary Fitzenreider, a couple of cousins and many close friends and adopted family who knew him as "Papa Fitz". In addition to his parents, he was preceded in death by his brother, Charles Fitzenreider, Jr.

Fitz was a man's man in every way. He was a big man, afraid of nothing and no one and if necessary, he always told anyone exactly what he thought of them or how they performed their work--usually in Fitz' own inimitable way. In fact, the truth is that Fitz oftentimes saved his most unflattering names for those employees of his for whom he cared the most.

Literally, thousands of young men and women became better employees and better people because of Fitz. Because, even though he certainly could be gruff, he always appreciated and complimented hard work and a job well done. So, these generations of young men and women learned the value and importance of doing your best, working hard and taking pride in your job.

Those who knew Fitz well also knew that behind that hard exterior was a big and loving heart. He dedicated his life to watching over and looking out for his neighbors and friends. He was active in every community in which he lived and freely gave out his personal phone number to the elderly and sick in his community. People knew that if they needed help in a hurry, Fitz was always the man to call.

Life ends. And a new chapter begins. But for those like Fitz who lived a life full of hard work, community service and dedication to family and friends, the end of life is to be celebrated, not mourned. It is we who are saddened by the loss of our dear friend. That is normal and understandable. But, do not mourn for Fitz. He lived his life exactly as life is intended to be lived. Rest well good friend.

A "Celebration of Life" for Fitz will be held on Saturday, August 14th at 5:00 pm at the Las Vegas Ballpark. Burial will take place at the Southern Nevada Veterans Memorial Cemetery. Date and time to be announced.

There will also be a memorial service to be held in St. Louis, MO. Date and time to be announced.

In lieu of flowers, please consider donating to one of the charities that Fitz loved and supported:

Memories and condolences may be shared at ShivesFuneralHome.com

Services will be held Saturday, August 14, 2021, 5:00 pm, at Las Vegas Ballpark, 1650 S. Pavilion Center Dr, Las Vegas, 89135,
Published by Las Vegas Review-Journal on Jul. 11, 2021.
To plant trees in memory, please visit the Sympathy Store.
MEMORIAL EVENTS
Aug
14
Celebration of Life
5:00p.m.
Las Vegas Ballpark
NV
MAKE A DONATION
MEMORIES & CONDOLENCES
3 Entries
Fitz will be missed, he was always helpful and friendly to me when I needed something at the ballpark-I was the sign painter there(34 yrs)
Ken Kline
August 7, 2021
Goodbye dear friend. You will be missed. A man who had everyone's 6
Dennis McConnell
Friend
July 16, 2021
Fitz will definitely be missed. We loved him so much especially for his way that he treated each and every person with respect. You always knew he loved you too. Rest In Peace my friend
Debbie & Gino Hughes
Friend
July 12, 2021
Showing 1 - 3 of 3 results