Baker created the flag in 1978 while living in San Francisco. Following the assassination of openly gay city Supervisor Harvey Milk, he was asked to create a symbol for a gay pride parade.

The original flag was designed with eight color bands: pink for sex, red for life, orange for healing, yellow for sunlight, green for nature, turquoise for magic, blue for serenity, and purple for spirit. The flag proved an immediate hit.

“We stood there and watched and saw the flags, and their faces lit up,” Cleve Jones, a friend and fellow gay rights activist told The New York Times. “It needed no explanation. People knew immediately that it was our flag.”

It soon became the dominant emblem of gay pride and the movement to advocate for the rights of LGBT and questioning people. It can be seen in marches around the world and is often displayed outside homes and businesses. A symbol of celebration, love, and inclusion, it has also been adapted into myriad forms ranging from clothing to bumper stickers and beyond.

“A flag translates into everything, from tacky souvenirs to the names of organizations,” Baker said in a 2008 interview. Baker was born June 2, 1951, in Chanute, Kansas. He served in the U.S. Army from 1970 to 1972. Stationed in San Francisco, he remained in the city after his honorable discharge and became involved in the gay rights movement.

In 2008, he spoke about the progress that had been made since the creation of the rainbow flag in 1978.

“I mean, I look at like where we are today, and I can’t believe it,” Baker said, “in my lifetime we’re even talking about marriage and that, having this out and this open. We’re all part of this incredible wave of change for human rights.”
Published by The Telegraph on Apr. 1, 2017.
MAKE A DONATION
MEMORIES & CONDOLENCES
41 Entries
They say that everybody dies twice. The first time is when you pass away, but the next is when your name is said for the last time. Mr. Baker may not be physically here anymore, but due to his dedication, and amazing compassion for others, this wonderful man has a long, long life ahead of him. May you Rest In Peace, sir.
John Miller
January 14, 2019 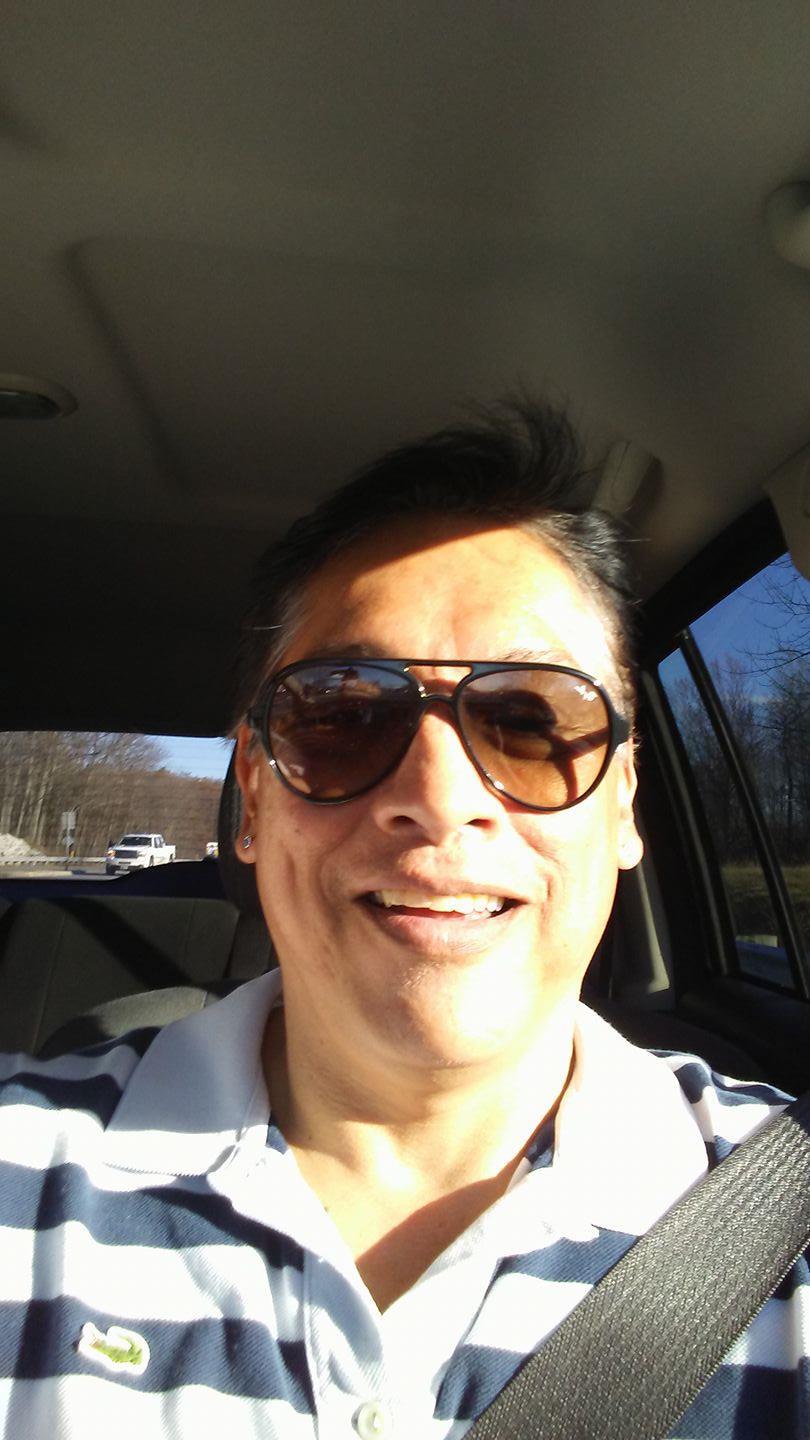 I was thinking of you yesterday, and Felt so Honored to See and Be A Part of So many Rainbow Flags!! Now I know why! Thank you!
Michael Cortez
June 18, 2017
Thank You Mr. Baker for all the heart and soul you gave to the LGBT community. You gave us the colors of the rainbow to be united under. Not a day will go by that your hard work will be forgotten and you will live on in our hearts. You are my hero and you can Rest In Peace knowing you left a mark, a light, a legacy, that will live on long after we are all gone from this world. Thank You! May those that feel the loss of your presents now not forget you are always with us in spirit.
Alfred Duggan
June 2, 2017
My Deepest condolences to Gilbert's family. Thank you for sharing him with the world. His Flag is known all over the world. He really loved his family he would often speak of his mom and the grandnephew who visited last year.Iknow that this grand-nephew loved trains. He always talked about you guys. I visited him a few days before he passed to chat and drop off a Easter card. I let him know I was going out of town. He seemed a little under the weather so I thought he would be o.k. I am his Gemini Soul-Sister.I will never forget This Brave Smart Kind person. I truly believe he is in God's Care. He did a lot for helping people to be more tolerant and understanding of the Gay community. God willuse whom ever he wants to.He would laugh when I said that but I believe that. May he forever rest in God's care.
Bev ueens, New York
May 23, 2017
Gilbert was one of America finest human beings I had the pleasure of accompanying him when he was interviewed on Fox5 N.Y. C. News Station . He was a very special friend who helped me tru some very hard times. I will never forget the special fun moments we shared and the laughter. He will forever be in my heart may he rest in peace. I was out of town during his passing and I had just seen him a few day before he died. Eventhough he was not feeling well at that visit I was thinking he would recover. I was wondering why I could not call him as usual these pass few weeks.
Bev Mayo
May 23, 2017
As you mourn the death of your loved ones, may our Heavenly Father touch your lives in a way that soothe your heart, and bring you peace. He has said I am your comforter,and I myself shall keep comforting you people. Isaiah 51:12 Condolences to you all.
Linda
May 4, 2017
Gilbert and I were neighbors, here in Wichita, and were classmates in junior high and our first year of high school. When he moved to Goddard and I moved to Arizona it was 50 years later, that when I googled his name, I found out about his celebrity status. I certainly admire him for his accomplishments...and to think that I walked to school with him. I want to express my sympathy for Mrs. Baker and Ardonna. He was a great friend and I will cherish the memories that I have of him.
Michael Hayes
May 1, 2017
My condolences to the family may you endure this difficult time of much sorrow.
Phillipians 4:6,7

NC
April 27, 2017
Matthew McGuire
April 27, 2017
Sending my sincere sympathy, my hearts goes out to you at this time of great sadness. Please know that God care about you, how you feel and invites you to let him help you. Jeremiah 29:12
April 12, 2017
All of this years PRIDE parade celebrations should honor Mr. Baker in a highlighted Tribute to by Over-Emphasizing this year his, if possible, 8 color flag which we all in the LGBTQIA community help identify ourselves with. https://encrypted-tbn0.gstatic.com/images?q=tbn:ANd9GcS8qwQFim-tidR-RiQyNbvH3K4XZoePwnhM2ea0x522gE2uq1jts0WDfg
G P
April 10, 2017
My heartfelt condolences to the friends and family of Gilbert. Rest assured life is precious to our Creator. He promises to act in our behalf.
1 Corinthians 15:26
April 5, 2017
PRAYERS AND BLESSINGS
Valenda Newell
April 5, 2017
May the God of all peace bring comfort to the Baker family and friends at this difficult time.
Carlotta
April 4, 2017
Thank you.
April 4, 2017
I am not Gay but I understand the struggle as I have a cousin that has been gay all his life. God bless you Mr Gilbert for taking a stand in difficult times Rest In Peace your battle is over. Thanks for that beautiful flag,
James Jones
April 4, 2017
Our prayers go out to all the family and friends may you have peace.
V.
April 3, 2017
Thank You Gilbert Baker! You took a stand back then for people that did not have a place to call home here in the USA and all over the world. We saw this flag waving at different times in our life, we new we were safe, and with friends.
May God continue to bless you, the way you blessed the world with your creation.
Love to his family and friends, from Family here in Michigan
Tina Bates
April 3, 2017
Peace.
Glen Hausfeld
April 3, 2017
My condolences to Mr Bakers family and friends,
May the God of all comfort you, and give you peace as you deal with the loss of your love one
RDR
April 3, 2017
May God bless you and your family in this time of sorrow.
April 3, 2017
I sincerely offer my condolence: Words seem insufficient at this time. May the love of family and friends help you to gradually recover from your pain.
April 3, 2017
May the God of comfort give you the strength to endure during this difficult time.
April 3, 2017
I'm so proud to live in the hometown of Gilbert Baker, Parsons, KS. God bless him and may he rest in peace. My sincere condolences to his family and friends.
April 3, 2017
To the family of Mr.Gibert Baker I am
writing to express my sincere condolences
to you all.
May you find comfort in the words Jesus
spoke at John 6:44.
Dee
April 3, 2017 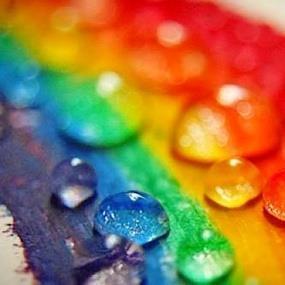 I remember the awestruck feeling I felt stepping off the Gay Freedom Celebration Parade in 1978 at the U.N. Plaza in San Francisco and looking up at the gently waving RAINBOW FLAGS high above me. One was a stylized American Flag. Little did I know that I would eventually meet and be "Betsy Ross" assistant in NYC feeding Gilbert miles of fabric as he stitched together the mile-long version for the 25th Anniversary of Stonewall in 1994. We lost touch in the past years but I have always carried his memory in my heart. Rest in peace my friend, you are one of the ancients now!
John Carollo
April 2, 2017
My deepest Condolences to the family of Gilbert Baker may you find Comfort in knowing that others share your sorrow with you, take Comfort in knowing that God keeps those who die in his memory because they are precious in his eyes.
Mary Green
April 2, 2017
My sincere condolences to the family
May the God of all comfort be with the family
Robert Little
April 2, 2017
The courage Gilbert showed during our formative years in Kansas foretold what he would achieve through his life. Rest in peace my friend knowing your influence will live forever.

Chris Shults
chris shults
April 2, 2017
Godspeed Gilbert, and thank you for sharing a part of your life with us.
Harry Simpson
April 2, 2017
To The Family of Gilbert Baker:
May his soul Rest In Peace and the perpetual light shine upon him.
With deepest sympathy,
Paul J. Gitnik
April 2, 2017 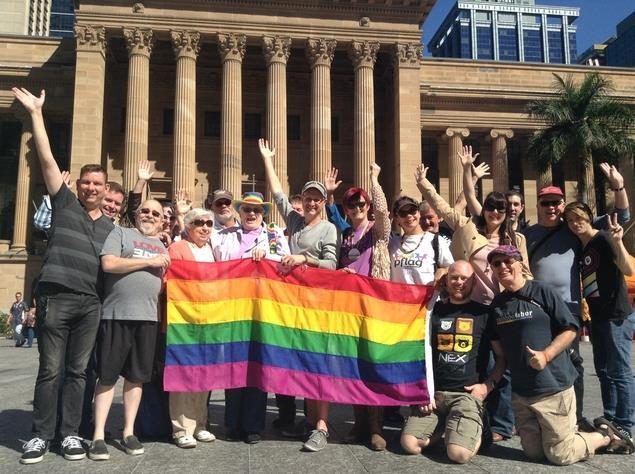 Rest in Peace Gilbeet. May we continue your bold legacy of flying the rainbw flag in public with dignity and pride in our diversity.
Tony Robertson
April 2, 2017
Thank you Gilbert Baker for standing up for LGBT rights and being part of liberty and justice FOR ALL!
Rest in Peace
Brad Branch
April 1, 2017
Dear Baker Family Rory and I would luv to express our condolences's on the loss of Gilbert Baker.luv,faith/rory
faith/rory tobin/dockett
April 1, 2017
Peaceful journey. Thank you for your creative spirit and humanity.
Carrie Corson
April 1, 2017
The colors you brought to the world will be long - always remembered.
Sandra Battle
April 1, 2017
RIP, Gilbert you will always be remembered with people who believe in RIGHTS for all not a few.
Susan Stephens
April 1, 2017
You helped make change, God Bless you and may you rest in peace
Christie freeman
April 1, 2017
Rest in Peace
Scott Chamberland
April 1, 2017
We'll miss you !
Adrian Barnette
April 1, 2017
RIP to an icon in the gay community. Kudos to your bravery during a time where this life was NOT welcomed and to all you did to make my friends and family from the LBGT community feel and live more comfortably.
RIP
Prayers to your family
barbara kuzminski
April 1, 2017
Showing 1 - 41 of 41 results