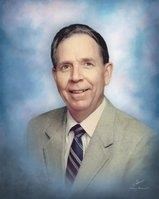 BORN
1929
DIED
2020
FUNERAL HOME
Snow's Memorial Chapel - Cherry Chapel
746 Cherry Street
Macon, GA
Dr. James Wareham Burnham, Jr.
October 19, 1929 - May 5, 2020
Macon, GA- Dr. James Burnham, Jr. passed away in peace on May 5, 2020. Born October 19, 1929, Jim made the most of his 90 years and had an extraordinary life. He was a gifted and respected physician in Macon, a great son to his parents as an only child, devoted husband to his wife Anne for 62 years, wonderful father of five children, grandfather to eleven, and great-grandfather to four, and known affectionately as our beloved "Daddy B."
He is preceded in death by his parents, James Wareham Burnham, Sr. and Sarah Myrtice (Reeder) Burnham, of Macon, wife Mary Anne Gaines Burnham, and son, James Wareham Burnham, III "Chip" of Roswell.
Jim attended Lanier High School in Macon (Beta Honors and Honor Board, ROTC) where he graduated in 1947. He then went on to Mercer University where he was a member of Sigma Nu and graduated magna cum laude in 1951. He entered Medical College of Georgia in Augusta graduating in 1955 and was a member of Alpha Omega Alpha Honor Society. In 1956, during his residency years at Macon Hospital, he enlisted in the US Navy where he served both active and reserve until 1963. His active duty included being a medical officer aboard the USS Canberra stationed out of Norfolk, Virginia. He returned to Macon to open his private practice at 1923 Jeffersonville Road in 1958 and practiced until 1991 serving the residents of Cross Keys location. In 1969, during his private practice years, he and three other physicians formed the first emergency room call group at what became known as Medical Center of Central Georgia. He obtained a license to practice medicine in the state of Florida by passing their medical boards but never practiced there.
After private practice, he worked for Robins AFB for six years after training in the newer discipline of occupational medicine, then for Caduceus Occupational Medicine and Heartworks Cardiac Rehab before retiring in 2008 at 79 years young. Jim was always able to reinvent himself as a physician by starting in general practice where he even delivered babies, to family practice and care for all generations, to a newer kind of medicine that fit the working people of Macon and Warner Robins.
Jim enjoyed many pursuits during his life. His proudest accomplishment he would admit was raising his family. While working and doing this, he taught himself how to fly an airplane and got a pilot's license. He bought a couple of vintage automobiles in need of repair and taught himself how to repair them and get them running on the road. His father taught him to love golf at a young age when he would take him to Idle Hour Country Club and it would become his favorite passionate hobby that he would pass on to his sons and grandsons . He was a member of Riverside Golf and Country Club and River North Country Club, and the Dixie Seniors Golf Group. During the past few years he enjoyed playing in golf scrambles with his sons and grandsons. Jim was very active and healthy, exercising at the Wellness Center six days a week.
He and his wife Anne were faithful and active long-standing members of Riverside United Methodist Church. They raised their five children in the church and Jim served on many boards; most recently the finance committee. He taught Sunday School and was co-president and a member of the Beaty Gray Sunday School class.
Jim is survived by his son Matt and his wife Cindy of Marietta, son Robert and his wife Marty of Macon, daughter Carol of Macon, and daughter Joy Williams and husband Wes of Marietta. In addition, grandchildren Jon Burnham and his wife Rikki of Roswell, Lauren Burnham of Los Angeles, Kaylee Crockett and husband Jeff of Birmingham, Taylor Burnham of New Orleans, Megan Burnham of Brooklyn, Kathleen Davis and husband Ryan Davis of Kennesaw, Gaines Elmore and wife Ashley of Warner Robins, Mason Elmore and wife Kelsey of Tampa, Griffin Elmore of Warner Robins, Grant Williams and Claire Williams of Marietta. Great grandchildren include Tyler and Rose Burnham of Roswell, Harrison Davis of Kennesaw and Kloe Elmore of Warner Robins.
A private graveside service will be held with the family. At a later date, a memorial service and celebration of life is planned.
For those who wish to honor Dr. James Burnham, the family knows that he would like for donations to go to Riverside United Methodist Church, 735 Pierce Avenue, Macon, Georgia 31204.
Visit www.snowscs.com to express tributes.
Snow's Memorial Chapel, Cherry Street, has charge of arrangements.

Published by The Telegraph on May 7, 2020.
To plant trees in memory, please visit our Sympathy Store.
MEMORIAL EVENTS
Memorial service
Service details to be determined.
Funeral services provided by:
Snow's Memorial Chapel - Cherry Chapel
MAKE A DONATION
MEMORIES & CONDOLENCES
1 Entry
Geat dr. Practiced down the street from my childhood home. Always there for our family. Saved my brothers life after an accident.
Dr.
May 10, 2020
Showing 1 - 1 of 1 results