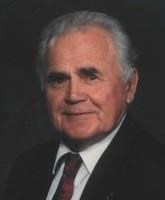 FUNERAL HOME
Watson-Hunt Funeral Home - Perry
1208 Main Street
Perry, GA
JIMMY HARMON, SR.
September 22, 2021
FT. VALLEY, Georgia - James Herman Harmon, Sr., 102, went to be with his Lord and Savior, Jesus Christ, on Wednesday, September 22, 2021. Funeral Services will be held on Monday, September 27, 2021. At Watson-Hunt Funeral Home in Perry, Visitation will begin at 11:00 a.m., and the Funeral will start at 12 Noon. At 3:00 p.m., the burial will be in Blue Water Baptist Church Cemetery, 2663 US-441, in Dublin, Georgia. In lieu of flowers, the family respectfully requests memorial contributions to the American Heart Association, 5962 Zebulon Road, PMB 359, Macon, Georgia 31210.
Jimmy was born in Phillipsburg, Kentucky, on December 15, 1919, to the late Eursley Kelly Harmon and the late Emma Lyons Harmon. He proudly served our country in the U. S. Army Air Corps. as a Staff Sergeant stationed at Cochran Field in Macon during World War II. While in Macon, Jimmy met and married the love of his life, Claudia Salter. The majority of his life was spent in Peach County where he loved farming, riding horses, and always growing enough produce to share with family and friends every year. Jimmy re-built and added on to their original farmhouse to make it a beautiful home for his wife and family. Through the years, he enjoyed woodworking and being in his workshop. Many of his family members are delighted to have pieces of furniture that he carefully crafted especially for each one.
Mr. Harmon was a long-time member and Deacon of Tharpe Memorial Baptist Church which later became Cross Point Baptist Church. He was also a member of the Joyful Seniors Sunday School Class and enjoyed receiving greeting cards from them once his health kept him at home on Sundays.
He was preceded in death by his parents; his wife, Claudia Salter Harmon; his daughter, Claudia Gail Hill; a grandson, Andy Matthews; his brothers, Vernon Harmon, Alford Harmon, and Shelby Harmon; and his sister, Hazel Spaulding.
Left to cherish the memories they made with Jimmy are his daughter, Wanda Guynn (Bobby) of High Point, North Carolina; his sons, Jimmy Harmon, Jr. (Debra) and David Harmon, both of Eatonton; his son-in-law, Phillip Hill of Eatonton; nine grandchildren; fifteen great-grandchildren; two great-great-grandchildren (and one on-the-way); his brother, Ronnie Harmon of Lebanon, Kentucky; and many nieces, nephews, great-nieces, and great-nephews.
Condolences for the family may be left in the online guestbook at www.watsonhunt.com. Watson-Hunt Funeral Home has been entrusted with the arrangements.

Published by The Telegraph on Sep. 26, 2021.
To plant trees in memory, please visit the Sympathy Store.
MEMORIAL EVENTS
Sep
27
Visitation
11:00a.m. - 12:00p.m.
Watson - Hunt Funeral Home
1208 Main Street, P.
Sep
27
Funeral
12:00p.m.
Watson - Hunt Funeral Home
1208 Main Street, P.
Sep
27
Burial
3:00p.m.
Blue Water Baptist Church Cemetery
2663 US Highway, Dublin, GA
Funeral services provided by:
Watson-Hunt Funeral Home - Perry
MAKE A DONATION
Please consider a donation as requested by the family.
MEMORIES & CONDOLENCES
Sponsored by Macon Telegraph.
4 Entries
May your memories of the wonderful times you shared with your loved one comfort you and your family, today and always.
American Heart Association
September 28, 2021
I remember Jimmy Harmon when I used to go to Tharpe. Always loved him. He was a wonderful man. I had stopped and seen him a few times after I had left. We loved him and he will be missed.
Kyle Heesh
Other
September 27, 2021
Offering our deepest condolences during this difficult time.
The Staff of Watson-Hunt Funeral Home
September 26, 2021
I was sorry to hear of his passing... But glad that he´s home with our Lord! A friend of Wanda´s
Carol Carrodus
September 24, 2021
Showing 1 - 4 of 4 results