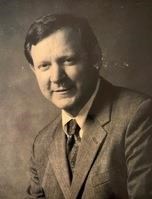 BORN
1942
DIED
2020
FUNERAL HOME
Frazier & Son Funeral Home
1016 4th Avenue
Rochelle, GA
Thomas Day Wilcox, Jr.
December 27, 1942 - August 20, 2020
Macon, Georgia- Thomas Day Wilcox Jr., Senior Superior Court Judge, died August 20, 2020, due to complications from cancer. Judge Wilcox was born on December 27, 1942 in Fitzgerald, Georgia. The son of the late Tommie Day Wilcox and Laura McLeod Wilcox, he grew up in Wilcox County, Georgia. He was valedictorian of his high school class at Abbeville High School and graduated from Mercer University with an AB degree in 1965 and a JD degree in 1973. While at Mercer, he served as President of the Student Government Association and was Captain of the varsity basketball team, later being inducted into the Mercer Athletic Hall of Fame.
Judge Wilcox served in the United States Navy, reaching the grade of Lieutenant. Following his military service and graduation from Mercer Law School, he began the practice of law with John E. James and B. Robert Shipp in Macon. During his time as a lawyer, he was President of the Macon Bar Association, Chairman of the State Disciplinary Board for Lawyers, and was a member of the Georgia State Bar Board of Governors. He was appointed to the office of Judge of the Superior Court of the Macon Judicial Circuit in 1981. While in office he was elected President of the Council of Superior Court Judges. He was a charter member of the National Consortium of Task Forces and Commissions on Racial and Ethnic Bias in the Courts. In 2014, the Administrative Office of Courts in Georgia created the Judge Tommy Day Wilcox Award to honor court personnel who exemplify vision and sound leadership in promoting the mission of accountability courts in Georgia, honoring his role in creating the first Adult Drug Court in Georgia. He was the first recipient of the award.
Judge Wilcox was also active in civic affairs. He served as a trustee of the Macon-Bibb County Library Board, as Chairman of the Board at the Macon Museum of Arts and Sciences, on the board of the Methodist Home for Children and Youth, and on the Board of Trustees of Mercer University, where he also served as President of the Alumni. He was a member of the Vineville United Methodist Church, where he was a trustee and served a term as Chairman of the Administrative Board. He was also a founder of the Allen Sanders Fellowship Class.
Judge Wilcox is survived by his wife of fifty-two years, Cindy, his children Sally Anne Wilcox Brown (Scott) of Ponte Vedra Beach, Florida and Thomas Day Wilcox III (Jessica) of Athens, Georgia, his grandchildren Benedicte Eloise Brown, Thomas Day Wilcox IV, and Adaliene Anne Wilcox, and his brother Roderick McLeod Wilcox (Sally) of Albany, Georgia and many nieces and nephews.
He was laid to rest in a private service officiated by Dr. Jimmy Asbell Jr. in Abbeville, Georgia on Saturday August 22, 2020. Memorial contributions in his honor may be made to Vineville United Methodist Church in Macon, Georgia or to Abbeville United Methodist Church in Abbeville, Georgia.
Tommy Day was a devoted friend and he loved making memories and telling stories. So that he might live the more richly in all of our memories, the family invites all who knew and loved him to share their stories of Tommy Day by emailing them to [email protected] Frazier and Son Funeral and Cremation Services was in charge of arrangements.

Published by The Telegraph on Aug. 24, 2020.
To plant trees in memory, please visit the Sympathy Store.
MEMORIAL EVENTS
To offer your sympathy during this difficult time, you can now have memorial trees planted in a National Forest in memory of your loved one.
Funeral services provided by:
Frazier & Son Funeral Home
MAKE A DONATION
MEMORIES & CONDOLENCES
12 Entries
In my years at Mercer University I was fortunate to be a friend of TD as he was called by most of his buddies. We shared many good times together as we were both members of the same fraternity and participants in sports. I, like everyone else who knew TD, appreciated his humorous and caring personality. He was a model leader and fun to be around. It was a great privilege to have him stand up as “Best Man” at our wedding. A few months prior to the wedding TD had volunteered to drive from Macon, Ga. to Pensacola, Fl where I was stationed as a student in Naval Aviation. He brought my girl friend and future wife along! While he was largely neglected over the weekend, he adjusted as was typical of him and claimed to have a good time. The trip resulted in Linda Walton and I getting engaged, and of course much appreciation to our true friend. Thanks TD. You were an amazing friend and will always be remembered. My sympathies are with all who knew and loved him.
Arnie White
Friend
September 1, 2020
JUDGE WILCOX HAS A LEGACY FOR HIS ABILITY TO LISTEN TO BOTH SIDES OF ANY ISSUE.. WITH HIS QUIET TONE IN HIS VOICE THERE WAS ALWAYS PRAISE FOR HIS ANSWERS.
nan cleveland
Friend
August 25, 2020
My deepest condolences to the family of Judge Tommy Day Wilcox. I pray for the entire family during this time.

Thank you, Judge Wilcox, for serving as our judge. I appreciate you and your service.

Rest In Peace.
Veronica Brinson
Coworker
August 25, 2020
I was the atty for the defense in the first civil case Tommy Day presided over as Judge. Trial was in Roberta Courthouse with all the windows open as the trucks passing by. The opposing atty, long since deceased, reminded me of Otis on the Andy Griffith show. What a hoot. TD had a quick sense of humor. Will be missed by many. Prayers for the family
John Edwards
Friend
August 24, 2020
May God bless you and your family in this time of sorrow. I remember him being so warm and friendly. Always available. He told so many wonderful stories. His wisdom and compassion will be missed.
Lisa Bell
Coworker
August 24, 2020
Dear Cindy and Wilcox Family,

We were so saddened when we learned of Judge Tommy Day's passing. He married us. One day at lunch, he sat down with Tyler and gave him an extensive tutorial on timber cruising while waiting to pick up food to take to the Mercer basketball team.

Cindy, you both have always treated us like a part of the family and we are so appreciative and grateful to have known you and Tommy Day. We will be praying for the family and seeing you soon.
Catherine and Tyler Wood
Friend
August 24, 2020
Cindy, my thoughts and prayers are with you. Tommy Day was such a kind and caring person.
Edna Padgett
Friend
August 24, 2020
As a member of his class at Mercer Law, I have many fond memories of TD. He was a true friend and we will all miss him but his memories will live on and on forever. He was a strong Christian and I hope to see him again when I cross that river. My sincere condolences to Cindy, his children and grandchildren.
Byrd Garland
Friend
August 23, 2020
Tommy Day was my brightest welcoming committee of one my freshman year at Mercer. He was our guide and best cheerleader showing us around campus and the original Mercer at Penfield where my great grandfather Thomas DuPree began, then helped move the college to Macon. Tommy Day's smile and energy made you want to join in. I'm grateful. He contributed so much to all of his community.
Susan DuPree Mincey
Friend
August 23, 2020
I was at Mercer U. with Tommy and Cindy was my sorority sister. Cindy, so sad to learn of his passing. I know that your memories will be a source of comfort as will your wonderful children. My sympathies are with you! And my love. As you well know, T. D. Was one of a kind...an amazing individual! May he Rest In Peace.
Linda Walton White Travis
Friend
August 22, 2020
So very sorry to hear of his passing . Ned and I send our prayers for comfort.
Donna and Ned Hastings
Donna Ashman Hastings
August 22, 2020
I just saw this on Facebook and my heart is breaking...for Cindy & family, the Mercer community and the community where he lived and worked. What a life he lived, what a legacy he leaves-what a man he was!!! He definitely made a difference to all of the lives he touched...he will be missed.