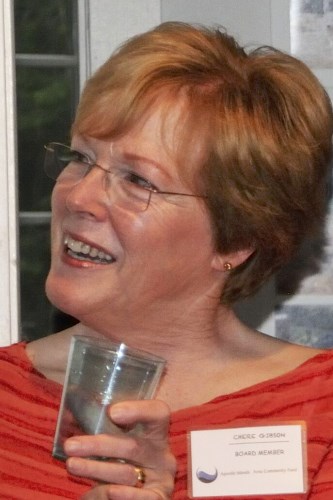 MADISON - It is with deep sorrow that the family announces the passing of Chère Campbell Gibson on Aug. 25, 2020. She leaves behind her loving husband, Terry Lee Gibson; son, Scott Trask Coggins, and his wife, Robin; and her grandchildren, Declan and Torin Coggins; step-daughter, Diane Gibson, and husband, Gerald Cubbin, and their children, Henry and Violet; and step-son, Robert, and his wife, Karlene, and their children, Maya and Kal. She also leaves behind her sisters, Marcia Ann (nee Campbell) Mason, Tracy Lynn Campbell, and Tamara Lee Campbell, with husband, Geoff Jones, and daughter, Peyton.

Chère was predeceased by her parents, George Edgar Campbell and Doreen Beatrice Dunfee; and by her first husband, George Ellsworth "Ted" Coggins. She is also predeceased by her aunts and uncles, Joan and Lawrence Arthur Campbell and Madelyn and Walter Frederick Campbell, and their son, Colin Frederick Campbell. She leaves behind her cousins, Paddy (nee Campbell) Minnis, Michael and Sandy Campbell, Jan (nee Campbell) and Brian Ferguson, Patrick and Pat Campbell, and Patricia (nee Buffo) Campbell, and their children and grandchildren. She also leaves behind her sisters-in-law, Patricia Coggins, Sherry (nee Gibson) Cantwell, Merry Gibson; and brother-in-law, Donald Coggins.

Chère was born Feb. 2, 1945, in Winnipeg, Manitoba, Canada. She moved to Montréal, Québec, Canada, in 1948, where she attended various schools, graduating from West Hill High School in 1962. Chère then attended MacDonald College of McGill University, Montréal, Québec, graduating with a B.Sc. in 1966. She married George Ellsworth "Ted" Coggins on Sept. 6, 1967.

Chère worked as a Dietitian for several years until she joined the faculty at Kemptville College of Agricultural Technology, in Kemptville, Ontario, Canada. She taught basic nutrition, diet therapy, and food service management. In 1971 she and her husband Ted enrolled in the University of Wisconsin-Madison in Madison, Wis. Chère focused her studies on Adult Education. She finished her Ph.D. in 1974. Her son, Scott Trask Coggins, was born on Jan. 8, 1974.

Chère was Professor in the School of Human Ecology, University of Wisconsin, Madison. She was a significant force in higher education distance learning since the early 1980s and published books, book chapters, and monographs in the field. In addition, it was Chère's vision and perseverance in partnership with her husband, Professor Terry Gibson, that led to the first Annual Conference on Distance Teaching and Learning in 1985, which is now viewed by many as a premier national distance learning conference for educators. In addition, she designed several award winning mediated instructional packages and originated the Certificate of Professional Development in Distance Education. She was inducted in the United States Distance Learning USDLA Hall of Fame 2003. In 2011 she was recognized for her work in Adult Education when she was inducted into the International Adult and Continuing Education Hall of Fame.

She retired from University of Wisconsin-Madison in 2004 and continued to be active with her husband and professional partner in publishing books and articles and in serving as External Evaluators on several national grants. She was also actively involved in Grace Episcopal Church in Madison and many groups and organizations in her summer community of Bayfield, Wis.

A memorial service via appropriate technology will be scheduled at Grace Episcopal Church in Madison, Wis. Check the website for details: http://www.gracechurchmadison.org.

To plant trees in memory, please visit our Sympathy Store.
Published by Madison.com on Sep. 20, 2020.
MEMORIAL EVENTS
No memorial events are currently scheduled.
To offer your sympathy during this difficult time, you can now have memorial trees planted in a National Forest in memory of your loved one.
GUEST BOOK
19 Entries
My sincere sympathy to Terry and all of Chere's family! Your loss is felt widely by many in the field!
Jane K. Terpstra, Emerita Program Director, Distance Education Professional
October 30, 2020
Condolences to the family. Chere was a friend and classmate at MacDonald College.
Ron Augustine
October 28, 2020
Chere was a great friend at MacDonald College in the 60s. She was a bright light to all her friends. Sincere sympathies to her family.
Susan Ward Bryson
October 27, 2020
Chère enjoyed living her life to the fullest, loved the beauty in nature, and adored her friends and family. We will miss her so much.
Susan O'Neill
October 25, 2020
Terry and Family, You have my deepest sympathy. Chere was such a lovely, warm person who always made me smile. She left the world a better place in so many ways.
Vicki Jacobsen Klump
September 25, 2020
Thinking of you, Terry and your family as you celebrate Chere's life and accomplishments. Her work on distance education and evaluation was cutting edge and paved the way for providing quality distance education opportunities. She was a special lady with a unique laugh! Always upbeat and willing to lend a helping hand. She will be missed.
Mary Brintnall Peterson
September 25, 2020
So many special memories of Chere. She made a difference.
Judith Adrian
Student
September 25, 2020
She was a giant. A true pioneer. I am so very sorry for your great loss, Terry. My condolences to you and your family.
Ellen Wagner
September 25, 2020
Terry and family, my condolences to you. Chère was one of our first instructors in MEPP, our first UW-Madison online engineering degree that started up in 1999. She was a delight to work with.
Lauranne Bailey
September 25, 2020
I'm so sorry to hear this. Chere was a driving force in my early days of working at UW-Madison. On a particularly rough day, I remember her taking me on one of her fast walks around the block telling me, don't EVER let them see you cry. I always did my best fearing another fast walk! I will miss her but I will never forget her. My condolences...
Donna Anderson
September 25, 2020
Working to get my head around this and failing. My deepest condolences to you, Terry, and your families. Truly one of the most influential people in my life. I'm deeply sorry. =”
Darcy Hardy
September 24, 2020
Such a wonderful professional that touched the lives of many. Reading her life accomplishments reminded me of the influence she made for me with distance learning and adult education. Prayers sent to Terry and family.
Karen Dickrell
Coworker
September 24, 2020
Chère was my dissertation advisor and colleague in the field of adult and distance education. A vibrant, knowledgeable, and dedicated scholar and practitioner, always focusing on the learner, she has affected my practice and the practice and learning of many others. Her aura illuminated any room she stepped in. As a scholar and practitioner she will continue to illuminate the field with her many publications. Terry, my thoughts are with you and your family.
Simone Concei&#231;&#227;o
September 24, 2020
My deepest sympathy Terry and family. Chere was a shining light in the forest and her many legacies will never be forgotten. I admired her keen intellect, kindness and fun loving spirit and will forever treasure the memories I have of her d
Kathryn M. Bergner
September 21, 2020
We are so sorrow filled at the loss of our friend, Chere. Our condolences to you and your family, but words are never enough. We are praying for God's comfort for you. Hope to see you again here in Bayfield.
Hal and Margaret Watkins
September 21, 2020
Chere was a delightful colleague. My sympathy to Terry and other family.
Craig Gjerde
September 21, 2020
My deepest sympathy. Chere was a lovely person and will be greatly missed.
Mary Ellen Bell
September 20, 2020
Terry, such a beautiful obit for Chere, I know you could have written pages about all her talents, her grace and beauty and her many friends. We miss her so much and know that our lives will never be the same without her. Sending love, prayers and healing energy your way. Let us know if we can do anything. Love you!
Betsy Albert-Peacock and Tom Peacock
September 20, 2020
We have never had a time when distance learning was more important then today. Chère was a leader in this field and her ground breaking work helped equip educators for this moment. More importantly, Chère was a loving, caring, and thoughtful person. She is going to be missed by all her knew her.
Andrew Lewis
September 20, 2020