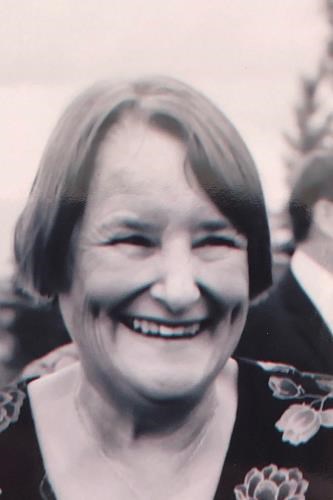 As the tale is told, Ann was born during an air raid in London. When she was barely one year old, she acquired two older sisters when they returned from five years of evacuation in Jamaica during the war. The following year her twin brothers were born, making her the quintessential middle child.

She began her schooling at North London Collegiate School before receiving her Bachelor of Science from the University of St. Andrews in Dundee. She then attended Oxford University, where she received her D. Phil. in biochemistry. In 1968 she married Professor Laurence Andrew Ball, and together they moved to Madison to pursue post-doctoral research opportunities. After two years completing her post-doctoral work in the lab of Deric Bownds, they returned to England, where she worked as an editor for the Biochemical Journal in London. In 1974 they moved to the United States again to live in Connecticut for five years, before settling in Madison to raise their family. In 1983 the marriage ended.

Ann taught chemistry at both Edgewood College and MATC before entering into her 21-year career at the University of Wisconsin-Madison as an administrator for the Institute of Molecular Virology. During that time, along with her many other duties, she was instrumental in organizing the American Society of Virology Meetings that were held at the University. She retired from the UW in 2002.

Ann's greatest pleasures came from her connections to others. During her retirement, she maintained her many friendships and continued to expand them by becoming active in both the Dickens Society and the Jane Austen Society, participating in PLATO, and volunteering in the Madison Public Schools. Ann loved spending time with friends while attending plays, particularly at the American Players Theater. She loved the card games bridge and Racing Demons, Mahjong, tennis, golf, and cheering on the Badgers and the Green Bay Packers. She was delighted that, as a naturalized American citizen, she could cast a vote for Joe Biden.

Ann is survived by her daughters, Jennifer Truitt and Katherine Ball; son-in-law, Tim Truitt; and grandchildren, Clarissa and Quintin Truitt, and Scarlet, Dominic, and Logan Lemuz. She is also survived by her brother, the Hon. Alan Gordon Walker; and her sister, Reverend the Hon. Caroline Brierley; numerous nieces and nephews; as well as many great-nieces and great-nephews. She was preceded in death by her parents; her sister, Dr. the Hon. Judith Gowar; and her brother, the Hon. Robin Gordon-Walker.

Ann's funeral will be held on Wednesday, Feb. 3. Due to COVID, the event will be limited to members of the immediate family. The family asks that in lieu of flowers donations be made to American Players Theater, Wisconsin Public Television, or anything that you personally know she liked.

The family intends to schedule an opportunity for remembrance and celebration of Ann's life at a future date.

The family would like to thank the staff at Agrace HospiceCare for their compassionate assistance during these past few months.

To plant trees in memory, please visit our Sympathy Store.
Published by Madison.com on Jan. 31, 2021.
MEMORIAL EVENTS
No memorial events are currently scheduled.
To offer your sympathy during this difficult time, you can now have memorial trees planted in a National Forest in memory of your loved one.
Funeral services provided by:
Cress Funeral & Cremation Service - Madison West
GUEST BOOK
Sponsored by Cress Funeral & Cremation Service - Madison West.
6 Entries
Dear Ann, I shall miss our 35 years tradition of going to APT together. I was happily surprised to see you in the PLATO audience on the day I gave a lecture there. I thank you for all your kindness and spirited friendship over the many years I have known you. You made a difference in my life and that of many others. I shall miss your "hey kiddo!" welcome words that meant total acceptance and warmed my heart. Today is your birthday. I shall miss you tremendously.
Jean-Yves Sgro
February 27, 2021
So sorry to hear. A good friend in our student days. Always a laugh.
David Cannon
February 4, 2021
Ann and I would cross paths attending various UW events and it always energized me with her great smile and sparkling (and sometimes mischievous ) eyes . Later, we would cross paths on the Lakeshore Path as I walked Howie the dog and give big waves and hearty hellos to each other. I will miss her.
Paula Bonner
February 1, 2021
To the family. Your Mom and I spent about 5yrs with the UL Hiking group in Madison. We enjoyed the walks and talks. She was a dear friend.
Judy Troia
January 31, 2021
We didn't know that Ann was born during the London Blitz.  My Aunt Bev was evacuated from Brussels to London at the time of the German Blitzkrieg.   Since Alice and Ann always partnered for PLATO History treats, they shared stories and we found out that kids in Britain at that time had special nicknames .... Bev's was Dearsie, Ann's was Panda.   Ann read the family published biography of Aunt Bev and her London war experiences. Jim appreciated the support of Ann's extensive science knowledge when presenting in both PLATO Biography and History.  She was never without a story, a laugh, and a smile.
Alice & Jim Leidel
January 31, 2021
Offering our deepest condolences during this difficult time.
The Staff of Cress Funeral & Cremation Service
January 31, 2021